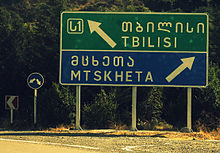 Romanization of Georgian is the process of transliterating the Georgian language from the Georgian script into the Latin script.

This system, adopted in February 2002 by the State Department of Geodesy and Cartography of Georgia and the Institute of Linguistics, Georgian National Academy of Sciences, establishes a transliteration system of the Georgian letters into Latin letters.[1] The system was already in use, since 1998, on driving licenses. It is also used by BGN and PCGN since 2009.

Despite its popularity this system sometimes leads to ambiguity. The system is mostly used in social networks, forums, chat rooms, etc. The system is greatly influenced by the common case-sensitive Georgian keyboard layout that ties each key to each letter in the alphabet (seven of them: T, W, R, S, J, Z, C with the help of the shift key to make another letter).

ISO 9984:1996, "Transliteration of Georgian characters into Latin characters", was last reviewed and confirmed in 2010.[2] The guiding principles in the standard are:

Retrieved from "http://en.turkcewiki.org/w/index.php?title=Romanization_of_Georgian&oldid=998457565"
This website is a mirror of Wikipedia, and is not affiliated with the Wikimedia Foundation.
Categories: