Jump to navigation Jump to search
the property of goods whose consumption by one consumer prevents, makes it harder to, or lessens the benefits of simultaneous consumption by other consumers 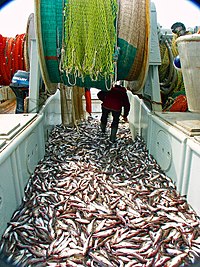 Wild fish stocks are a rivalrous good, as the amount of fish caught by one boat reduces the number of fish available to be caught by others.

A good can be placed along a continuum from rivalrous through non-rivalrous to anti-rivalrous. The distinction between rivalrous and non-rivalrous is sometimes referred to as jointness of supply or subtractable or non-subtractable.[3] Economist Paul Samuelson made the distinction between private and public goods in 1954 by introducing the concept of nonrival consumption. Economist Richard Musgrave followed on and added rivalry and excludability as criteria for defining consumption goods in 1959 and 1969.[4]

Most tangible goods, both durable and nondurable, are rival goods. A hammer is a durable rival good. One person's use of the hammer presents a significant barrier to others who desire to use that hammer at the same time. However, the first user does not "use up" the hammer, meaning that some rival goods can still be shared through time. An apple is a nondurable rival good: once an apple is eaten, it is "used up" and can no longer be eaten by others. Non-tangible goods can also be rivalrous. Examples include the ownership of radio spectra and domain names. In more general terms, almost all private goods are rivalrous.

In contrast, non-rival goods may be consumed by one consumer without preventing simultaneous consumption by others. Most examples of non-rival goods are intangible. Broadcast television is an example of a non-rival good; when a consumer turns on a TV set, this does not prevent the TV in another consumer's house from working. The television itself is a rival good, but television broadcasts are non-rival goods. Other examples of non-rival goods include a beautiful scenic view, national defense, clean air, street lights, and public safety. More generally, most intellectual property is non-rival. In fact, certain types of intellectual property become more valuable as more people consume them (anti-rival). For example, the more people use a particular language, the more valuable that language becomes.

Non-rivalry does not imply that the total production costs are low, but that the marginal production costs are zero. In reality, few goods are completely non-rival as rivalry can emerge at certain levels. For instance, use of public roads, the Internet, or police/law courts is non-rival up to a certain capacity, after which congestion means that each additional user decreases speed for others. For that, recent economic theory views rivalry as a continuum, not as a binary category,[5] where many goods are somewhere between the two extremes of completely rival and completely non-rival. A perfectly non-rival good can be consumed simultaneously by an unlimited number of consumers.

Goods are anti-rivalrous and inclusive if my enjoyment increases with how many others consume the good. The concept was introduced by Steven Weber (2004), saying that when more people use free and open-source software, it becomes easier and more powerful for all users.[6] Lessig noted that any natural language is anti-rivalrous, because its utility increases with how much it's used by others.[7] Cooper noted that efforts to combat climate change are perversely anti-rivalrous, because the US will benefit from the efforts of others to combat this problem, even if it refuses to do so.[8]

Types of goods based on rivalry in consumption and excludability[edit]

There are four types of goods based on the characteristics of rival in consumption and excludability: Public Goods, Private Goods, Common Resources, and Club Goods.[9] These four types plus examples for anti-rivalry appear in the accompanying table.[10]

Goods that are both non-rival and non-excludable are called public goods. Examples include clean air, national defense, and free-to-air broadcast TV. It is generally accepted by mainstream economists that the market mechanism will under-provide public goods, so these goods have to be produced by other means, including government provision.

On the other hand, private goods are rival and excludable. An example of this could be a Big Mac burger provided by McDonalds. An individual who consumes a Big Mac denies another individual from consuming the same one. It is excludable because consumption is only offered to those willing to pay the price.[11]

Common resources are rival in consumption and non-excludable. An example is that of fisheries, which harvest fish from a shared common resource pool of fish stock. Fish caught by one group of fishers are no longer accessible to another group, thus being rivalrous. However, oftentimes, due to an absence of well-defined property rights, it is difficult to restrict access to fishers who may overfish.[12]

Goods that are both non-rival and excludable are called club goods. Cable television is an example of this. A large television service provider would already have infrastructure in place which would allow for the addition of new customers without infringing on existing customers viewing abilities. This would also mean that marginal cost would be close to zero, which satisfies the criteria for a good to be considered non-rival. However, access to cable TV services are only available to consumers willing to pay the price, demonstrating the excludability aspect.[13]

Retrieved from "http://en.turkcewiki.org/w/index.php?title=Rivalry_(economics)&oldid=1018024251"
This website is a mirror of Wikipedia, and is not affiliated with the Wikimedia Foundation.
Categories:
Hidden categories: