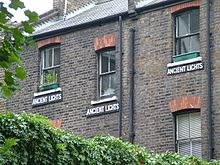 Right to light is a form of easement in English law that gives a long-standing owner of a building with windows a right to maintain the level of illumination. The right was traditionally known in the Anglo-American common law as the doctrine of "ancient lights".[1]

In England, the rights to ancient lights are most usually acquired under the Prescription Act 1832. But the doctrine died out in the American common law during the 19th century, and is generally no longer recognized in the United States. 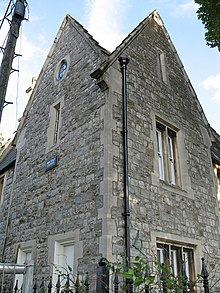 In effect, the owner of a building with windows that have received natural daylight for 20 years or more is entitled to forbid any construction or other obstruction that would deprive him or her of that illumination. Neighbours cannot build anything that would block the light without permission. The owner may build more or larger windows but cannot enlarge their new windows before the new period of 20 years has expired. It is also possible for a right to light to exist if granted expressly by deed, or granted implicitly, for example under the rule in Wheeldon v. Burrows (1879).

Once a right to light exists, the owner of the right is entitled to "sufficient light according to the ordinary notions of mankind": Colls v. Home & Colonial Stores Ltd (1904). Courts rely on expert witnesses to define this term. Since the 1920s, experts have used a method proposed by Percy Waldram to assist them with this. Waldram suggested that ordinary people require one foot-candle of illuminance (approximately ten lux) for reading and other work involving visual discrimination. This equates to a sky factor (similar to the daylight factor) of 0.2%. Today, Waldram's methods are increasingly subject to criticism[2][3] and the future of expert evidence in rights to light cases is currently the subject of much debate within the surveying profession.[4]

After the Second World War, owners of buildings could gain new rights by registering properties that had been destroyed in bombings and the period was temporarily increased to 27 years.

In the centre of London near Chinatown and Covent Garden, particularly in back alleyways, signs saying "Ancient Lights" can be seen marking individual windows. The design and construction of Broadcasting House in the early 1930s was also affected by locals declaring their right to ancient lights. It resulted in a unique asymmetrical sloped design that allowed for sunlight to pass over the building to the residential quarters eastwards, long since demolished and now home to the new Egton Wing.

Another factor considered with regards to Ancient Lights refers to the building's surroundings rather than its residents. The convention basically is that if an old building which is marked with 'Ancient Lights' is demolished, then the new building which replaces it can not be of a height higher than that of the original building.

Recent case law from 2010, relating to a commercial development in the centre of Leeds (HKRUK II v Heaney) has significantly changed the perceptions of risk associated with right-to-light, particularly in the context of commercial schemes. This case upheld an injunction against a commercial property. The result of this is that many developers are now looking to work with local authorities to try to use section 237 of the Town and Country Planning Act 1990. This potentially stops injunctions against schemes that have over-riding social or economic advantages to an area.

In 1984, voters in San Francisco passed Proposition K, which prevents construction of any building over 40 feet (12.2 m) that casts a shadow on a public park, unless the Planning Commission decides the shadow is insignificant. This proposition causes problems for a proposed 75-story building south of Market Street, which would cast a shadow on a public park ten blocks away, for one hour of the day in the fall, as well as St. Mary's Square, Justin Herman Plaza, and Union Square for significant parts of the year.[7] Massachusetts has similar laws against the casting of shadows on Boston Common, the Public Garden, and other important public open spaces.[8]

Retrieved from "http://en.turkcewiki.org/w/index.php?title=Right_to_light&oldid=983833564"
This website is a mirror of Wikipedia, and is not affiliated with the Wikimedia Foundation.
Categories:
Hidden categories: