Jump to navigation Jump to search
Type of consonant articulation 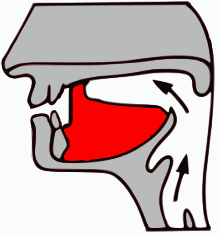 A retroflex consonant is a coronal consonant where the tongue has a flat, concave, or even curled shape, and is articulated between the alveolar ridge and the hard palate. They are sometimes referred to as cerebral consonants, especially in Indology. Other terms occasionally encountered are apico-domal and cacuminal /kæˈkjuːmɪnəl/.

Retroflex consonants, like other coronal consonants, come in several varieties, depending on the shape of the tongue. The tongue may be either flat or concave, or even with the tip curled back. The point of contact on the tongue may be with the tip (apical), with the blade (laminal), or with the underside of the tongue (subapical). The point of contact on the roof of the mouth may be with the alveolar ridge (alveolar), the area behind the alveolar ridge (postalveolar), or the hard palate (palatal). Finally, both sibilant (fricative or affricate) and nonsibilant (stop, nasal, lateral, rhotic) consonants can have a retroflex articulation.

The greatest variety of combinations occurs with sibilants, because for these, small changes in tongue shape and position cause significant changes in the resulting sound. Retroflex sounds in general have a duller, lower-pitched sound than other alveolar or postalveolar consonants, and especially the grooved alveolar sibilants. The farther back the point of contact with the roof of the mouth, the more concave is the shape of the tongue, and the duller (lower pitched) is the sound, with subapical consonants being the most extreme.

The main combinations normally observed are:

The subapical sounds are sometimes called "true retroflex" because of the curled-back shape of the tongue, while the other sounds sometimes go by other names. For example, Ladefoged and Maddieson[2] prefer to call the laminal post-alveolar sounds "flat post-alveolar".

Retroflex sounds must be distinguished from other consonants made in the same parts of the mouth:

The first three types of sounds above have a convex tongue shape, which gives them an additional secondary articulation of palatalization. The last type has a groove running down the center line of the tongue, which gives it a strongly hissing quality. The retroflex sounds, however, have a flat or concave shape, with no associated palatalization, and no groove running down the tongue. The term "retroflex", in fact, literally means "bent back" (concave), although consonants with a flat tongue shape are commonly considered retroflex as well.

In the International Phonetic Alphabet, the symbols for retroflex consonants are typically the same as for the alveolar consonants, but with the addition of a right-facing hook to the bottom of the symbol.

Retroflex consonants are transcribed in the International Phonetic Alphabet as follows:

Some linguists restrict these symbols for consonants with subapical palatal articulation, in which the tongue is curled back and contacts the hard palate, and use the alveolar symbols with the obsolete IPA underdot symbol for an apical post-alveolar articulation: ⟨ṭ, ḍ, ṇ, ṣ, ẓ, ḷ, ɾ̣, ɹ̣⟩, and use ⟨ᶘ, ᶚ⟩ for laminal retroflex, as in Polish and Russian. The latter are also often transcribed with a retraction diacritic, as ⟨s̠⟩. Otherwise they are typically but inaccurately transcribed as if they were palato-alveolar, as ⟨*ʃ⟩.

Consonants with more forward articulation, in which the tongue touches the Alveolar or postalveolar region rather than the hard palate, can be indicated with the retracted diacritic (minus sign below). This occurs especially for [s̠ ẕ]; other sounds indicated this way, such as ⟨ṉ ḻ ḏ⟩, tend to refer to alveolo-palatal rather than retroflex consonants.

Although data are not precise, about 20 percent of the world's languages contain retroflex consonants of one sort or another.[3] About half of these possess only retroflex continuants, with most of the rest having both stops and continuants.

The other major concentration is in the indigenous languages of Australia and the Western Pacific (notably New Caledonia). Here, most languages have retroflex plosives, nasal and approximants.

Retroflex consonants are relatively rare among European languages but are used in such languages as Swedish and Norwegian in Northern Europe, some Romance languages of Southern Europe (Sardinian, Sicilian, including Calabrian and Salentino, some Italian dialects such as Lunigianese in Italy, and some Asturian dialects in Spain), and (sibilants only) Faroese and several Slavic languages (Polish, Russian, Serbo-Croatian, Slovak and Sorbian). In Swedish and Norwegian, a sequence of r plus a coronal consonant may be replaced by the coronal's retroflex equivalent, e.g. the name Martin is pronounced [ˈmǎʈːɪn] (Swedish) or [ˈmɑ̀ʈːɪn] (Norwegian), and nord ("north") is pronounced [ˈnuːɖ] (

listen). This is sometimes done for several consonants in a row after an r — Hornstull is pronounced [huːɳʂˈʈɵlː]).

The retroflex approximant /ɻ/ is an allophone of the alveolar approximant /ɹ/ in many dialects of American English, particularly in the Midwestern United States. Polish and Russian possess retroflex sibilants, but no stops or liquids at this place of articulation.

Most languages with retroflex sounds typically have only one retroflex sound with a given manner of articulation. An exception, however, is the Toda language, with a two-way distinction among retroflex sibilants between apical (post)alveolar and subapical palatal.

‹ The template below (Articulation navbox) is being considered for merging. See templates for discussion to help reach a consensus. ›
Retrieved from "http://en.turkcewiki.org/w/index.php?title=Retroflex_consonant&oldid=965279456"
This website is a mirror of Wikipedia, and is not affiliated with the Wikimedia Foundation.
Categories:
Hidden categories: