Retail banking, also known as consumer banking, is the provision of services by a bank to the general public, rather than to companies, corporations or other banks, which are often described as wholesale banking. Banking services which are regarded as retail include provision of savings and transactional accounts, mortgages, personal loans, debit cards, and credit cards. Retail banking is also distinguished from investment banking or commercial banking. It may also refer to a division or department of a bank which deals with individual customers.

In the U.S., the term commercial bank is used for a normal bank to distinguish it from an investment bank. After the Great Depression, the Glass–Steagall Act restricted normal banks to banking activities, and investment banks were limited to engaging capital market activities. That distinction was repealed in the 1990s. Commercial bank can also refer to a bank or a division of a bank that deals mostly with deposits and loans from corporations or large businesses, as opposed to individual members of the public (retail banking). 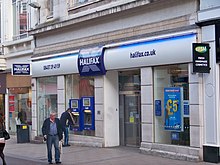 In some countries, such as the U.S., retail bank services also include more specialised accounts, such as:

Retrieved from "http://en.turkcewiki.org/w/index.php?title=Retail_banking&oldid=966660347"
This website is a mirror of Wikipedia, and is not affiliated with the Wikimedia Foundation.
Categories: