Jump to navigation Jump to search
Duplication of critical components to increase reliability of a system
For other uses, see Redundancy. 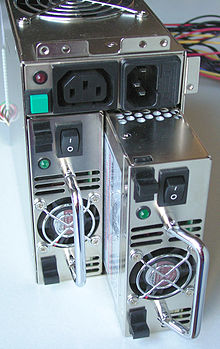 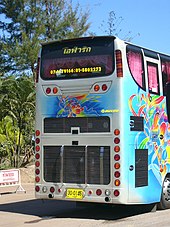 In engineering, redundancy is the duplication of critical components or functions of a system with the intention of increasing reliability of the system, usually in the form of a backup or fail-safe, or to improve actual system performance, such as in the case of GNSS receivers, or multi-threaded computer processing.

In many safety-critical systems, such as fly-by-wire and hydraulic systems in aircraft, some parts of the control system may be triplicated,[1] which is formally termed triple modular redundancy (TMR). An error in one component may then be out-voted by the other two. In a triply redundant system, the system has three sub components, all three of which must fail before the system fails. Since each one rarely fails, and the sub components are expected to fail independently, the probability of all three failing is calculated to be extraordinarily small; often outweighed by other risk factors, such as human error. Redundancy may also be known by the terms "majority voting systems"[2] or "voting logic".[3]

A suspension bridge's numerous cables are a form of redundancy.

Redundancy sometimes produces less, instead of greater reliability – it creates a more complex system which is prone to various issues, it may lead to human neglect of duty, and may lead to higher production demands which by overstressing the system may make it less safe.[4]

In computer science, there are four major forms of redundancy,[5] these are:

A modified form of software redundancy, applied to hardware may be:

Structures are usually designed with redundant parts as well, ensuring that if one part fails, the entire structure will not collapse. A structure without redundancy is called fracture-critical, meaning that a single broken component can cause the collapse of the entire structure. Bridges that failed due to lack of redundancy include the Silver Bridge and the Interstate 5 bridge over the Skagit River. 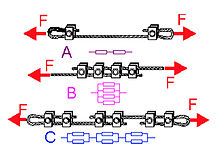 Series (A) and parallel (B) systems and their combination (C).[6]

Parallel and combined systems demonstrate different level of redundancy. The models are subject of studies in reliability and safety engineering.

Charles Perrow, author of Normal Accidents, has said that sometimes redundancies backfire and produce less, not more reliability. This may happen in three ways: First, redundant safety devices result in a more complex system, more prone to errors and accidents. Second, redundancy may lead to shirking of responsibility among workers. Third, redundancy may lead to increased production pressures, resulting in a system that operates at higher speeds, but less safely.[4]

Voting logic uses performance monitoring to determine how to reconfigure individual components so that operation continues without violating specification limitations of the overall system. Voting logic often involves computers, but systems composed of items other than computers may be reconfigured using voting logic. Circuit breakers are an example of a form of non-computer voting logic.

Electrical power systems use power scheduling to reconfigure active redundancy. Computing systems adjust the production output of each generating facility when other generating facilities are suddenly lost. This prevents blackout conditions during major events such as an earthquake.

A more reliable form of voting logic involves an odd number of three devices or more. All perform identical functions and the outputs are compared by the voting logic. The voting logic establishes a majority when there is a disagreement, and the majority will act to deactivate the output from other device(s) that disagree. A single fault will not interrupt normal operation. This technique is used with avionics systems, such as those responsible for operation of the Space Shuttle.

Calculating the probability of system failure[edit]

Each duplicate component added to the system decreases the probability of system failure according to the formula:-

This formula assumes independence of failure events. That means that the probability of a component B failing given that a component A has already failed is the same as that of B failing when A has not failed. There are situations where this is unreasonable, such as using two power supplies connected to the same socket in such a way that if one power supply failed, the other would too.

It also assumes that only one component is needed to keep the system running.

Retrieved from "http://en.turkcewiki.org/w/index.php?title=Redundancy_(engineering)&oldid=960417814"
This website is a mirror of Wikipedia, and is not affiliated with the Wikimedia Foundation.
Categories:
Hidden categories: