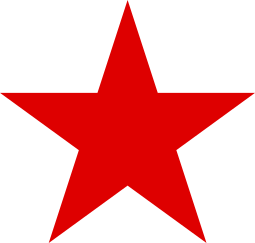 A red star, five-pointed and filled (★), is an important symbol that has often historically been associated with communist ideology, particularly in combination with the hammer and sickle, but is also used as a purely socialist symbol in the 21st century. It has been widely used in flags, state emblems, monuments, ornaments, and logos. Red Star is also Alexander Bogdanov's 1908 science fiction novel about a communist society on Mars.

The five-pointed red star has often served as a symbol of communism. One interpretation sees the five points as representing the five fingers of the worker's hand, as well as the five continents. A lesser-known suggestion[citation needed] is that the five points on the star were intended to represent the five social groups that would lead Russia to communism: the youth, the military, the industrial labourers, the agricultural workers or peasantry and the intelligentsia.

Different countries across Europe treat the symbol very differently: some have passed laws banning it by claiming that it represents "a totalitarian ideology",[1] but other countries hold a very positive view of it as a symbol of antifascism and resistance against Nazi occupation.

The star's origins as a symbol of communist mass movements dates from the time of the Bolshevik Revolution and the Russian Civil War, but the precise first use remains unknown. On the other hand, one account of the symbol's origin traces its roots to the Moscow troop garrison toward the end of World War I. At this time, many troops were fleeing from the Austrian and German fronts, joining the local Moscow garrison upon their arrival in the city. To distinguish the Moscow troops from the influx of retreating front-liners, officers gave out tin stars to the Moscow garrison soldiers to wear on their hats. When those troops joined the Red Army and the Bolsheviks they painted their tin stars red, the color of socialism, thus creating the original red star.[2]

Another claimed origin for the red star relates to an alleged encounter between Leon Trotsky and Nikolai Krylenko. Krylenko, an Esperantist, wore a green-star lapel badge; Trotsky inquired as to its meaning and received an explanation that each arm of the star represented one of the five traditional continents. On hearing that, Trotsky specified that soldiers of the Red Army should wear a similar, red, star.[3]

Regardless of the star's exact origin, it was incorporated into the Red Army's uniforms and heraldry as early as 1918.[4] 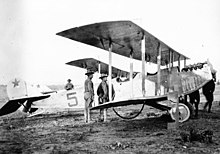 Shortly before the founding of the Soviet Union, in mid-March 1916 the U.S. Army Signal Corps' aviation section used the red star[5] for the national insignia for U.S. aircraft on the aircraft of the Signal Corps' 1st Aero Squadron during the Pancho Villa Expedition to apprehend the Mexican revolutionary.

Joseph Stalin was also known for wearing a pendant resembling the red star, as he did at the Tehran Conference in 1943.

Use in the USSR and its constituent republics[edit]

The symbol became one of the most prominent of the Soviet Union, adorning nearly all official buildings, awards and insignia. Sometimes the hammer and sickle appeared inside or below the star. In 1930 the Soviet Union established the Order of the Red Star and awarded its insignia to Red Army and Soviet Navy personnel for "exceptional service in the cause of the defense of the Soviet Union in both war and peace". The Soviet and Russian Federation military newspaper bore and bears the name Red Star (Russian: Krasnaya Zvezda).[6]

During the 1930s, Soviet publications encouraged the practice of decorating a New Year's tree, known as a yolka (Russian: Ёлка). These trees were often decorated[by whom?] with a red star, a practice that has continued in Russia since the 1991 dissolution of the Soviet Union.[7] 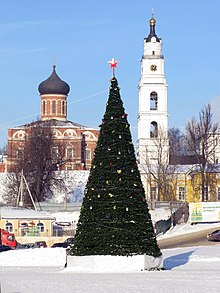 A New Year tree with a red star in front of a church cupola in Volokolamsk, Russia, 2010.

Gallery of the heraldry of Soviet republics[edit]

Use in other socialist countries[edit]

Following its adoption as an emblem of the Soviet Union, the red star became a symbol for communism around the world.

Several Communist states subsequently adopted the red star symbol, often placing it on their respective flags and coats of arms - for example on the flag of the Socialist Federal Republic of Yugoslavia. Separatist and socialist movements also sometimes adopted the red star, as on the Estelada flag in the Catalan countries.

The red star became a common element of the flags and heraldry of socialist states in the Eastern Bloc, appearing inn heraldry for virtually all of the countries, and on the flags of Bulgaria, Hungary, Romania, and Albania.

In former Yugoslavia the red star served not only a communist symbol, but also as a more generic symbol of resistance against Fascism and the Nazi occupation of Yugoslavia, as well as of opposition to its associated ethnic policies. Tito's partisans wore the red star as an identification symbol during World War II.

Socialist countries in Africa also incorporated the red or gold stars into their heraldry. This practice was also adopted by countries that formed following decolonial national liberation struggles, which often involved Marxist organizations.

By states with limited recognition[edit]

Transnistria and the Luhansk People's Republic are proto-states located in Eastern Europe. Due to their historical association with the Soviet Union, they have adopted socialist imagery - including the red star - into their flags and heraldry.

Several sporting clubs from countries ruled by communist parties used the red star as a symbol and named themselves after it, such as the Yugoslav club Red Star Belgrade (Serbian: Црвена звезда / Crvena zvezda), the East German Roter Stern Leipzig [de], the Angolan Estrela Vermelha do Huambo, the Estrela Vermelha from Beira, Mozambique or the Czechoslovak Rudá Hvězda Brno. Some sports teams from non-communist countries used it, such as French Red Star from Paris, Swiss club FC Red Star Zürich, English Seaham Red Star F.C., and even an American women's soccer club (Chicago Red Stars—though in that case the star is based on the flag of Chicago and not on the communist logo). The American soccer clubs Sacramento Republic FC and D.C. United also use red stars in their logos, referencing the flags of California and the District of Columbia respectively.

Use by socialist or revolutionary organizations[edit]

The Brazilian leftist Worker's Party uses a red star as its symbol with the party acronym (Portuguese: Partido dos Trabalhadores - PT) inside. Hugo Chávez and his supporters in Venezuela have used the red star in numerous symbols and logos, and have proposed including it in the logo of the United Socialist Party of Venezuela (PSUV).[citation needed] It was also used throughout 2007 as a symbol of the "5 Engines of the Bolivarian Socialist Revolution". It is also used by the militant South African shack-dweller's movement Abahlali baseMjondolo.

The red star was included in the flag of the Chiapas armed revolutionary group Ejército Zapatista de Liberación Nacional (EZLN) or Zapatista Army of National Liberation upon their formation in 1994. The same flag, a black flag with a red star, was used by US rock band Rage Against the Machine – who were vocal supporters of the EZLN and other left causes – so much so that the symbol came to be associated with the band, separate from the EZLN.[citation needed]

The Iranian Islamist-Socialist militant opposition group the Mojahedin-e-Khalq uses the red star with the rifle, sickle and the map of Iran in the background.

Use by military organizations[edit]

By March 2010, the Russian government readopted the Soviet red star (but now with a blue outline reflecting the three colors - white, blue and red - of the Russian flag) as a military insignia.[citation needed] The Russian Air Force used this star as a roundel up to 2013, when Russia re-instated the Soviet-era red star.[8]

Several European parties continue to use a star as a part of their logos. In some cases, these are still red, yet they are often set in different colours.

Some red stars adopted in emblems and flags have a significance that does not originally relate to socialism. Among these, the most well-known include the current state flag of California (echoing the Californian red star flag of 1836) and the flag of New Zealand (designed in 1869, officially adopted in 1902). The flag of the District of Columbia (designed in 1921, adopted in 1938) recalls George Washington's coat of arms.

The crescent moon and star was a symbol used by the Ottoman Empire. Various states with Ottoman history have thus adopted this symbol into their present-day flags.

Assorted Flags and Coats of Arms[edit]

Following the War, the American Red Star turned to focus on domestic issues, including care for animals during disasters. The organization waxed and waned over the decades, and as of 2016[update] exists as the American Humane Association's Red Star Animal Emergency Services.[10][verification needed]

Red stars in labels and logos[edit]

The red star was used by the Texaco oil company in various forms from 1909–1981.[11] Its overseas division Caltex also used the red star until 1996. The Red Star is currently a registered trademark of Red*Star Auto Works Inc. (pic).

The red star and the hammer and sickle are regarded as occupation symbols as well as symbols of totalitarianism and state terror by several countries that were formerly either members of or occupied by the Soviet Union. Accordingly, Latvia,[12] Lithuania,[13] Hungary[14] and Ukraine[15][16][17] have banned the symbol among others deemed to be symbols of fascism, socialism, communism and the Soviet Union and its republics. In Poland, the Parliament passed in 2009 a ban that referred generally to "fascist, communist or other totalitarian symbols", while not specifying any of them.[18] Following a constitutional complaint, it has been abolished by the Constitutional Tribunal as contrary to articles in the Constitution of Poland guaranteeing the freedom of speech. A similar law was considered in Estonia, but eventually failed in a parliamentary committee due to its conflict with freedoms guaranteed by the constitution of Estonia.

The European Court of Human Rights has ruled, in a similar manner, against the laws that ban political symbols, which were deemed to be in clear opposition with basic human rights, such as freedom of speech,[19][20] confirmed again in 2011 in case Fratanolo v. Hungary.[21] The decision has been compared[22] to the legislation concerning the symbols of Nazism, which continue to be banned in several European Union member states, including Germany and France.

There have been calls for an EU-wide ban on both Soviet and Nazi symbols, notably by politicians from Lithuania, Estonia, the Czech Republic, Hungary and Slovakia. The European Commissioner for Justice, Franco Frattini, felt it "might not be appropriate" to include communist symbols in the context of discussions on xenophobia and anti-Semitism.[23]

In 2003, Hungarian politician Attila Vajnai was arrested, handcuffed and fined for wearing a red star on his lapel during a demonstration. He appealed his sentence to the European Court of Human Rights, which decided that the ban was a violation of the freedom of expression, calling the Hungarian ban "indiscriminate" and "too broad".[24]

In Slovenia, the red star is respected as a symbol of resistance against fascism and Nazism. On 21 March 2011, Slovenia issued a two-euro commemorative coin to mark the 100th anniversary of the birth of Franc Rozman, a partizan commander, featuring a large star that represented a red star.

Emblems and flags where the red stars displayed are not five-pointed are much rarer. Among these the following deserve mention.

Retrieved from "http://en.turkcewiki.org/w/index.php?title=Red_star&oldid=960589181"
This website is a mirror of Wikipedia, and is not affiliated with the Wikimedia Foundation.
Categories:
Hidden categories: