The red junglefowl (Gallus gallus) is a tropical bird in the family Phasianidae. It ranges across much of Southeast Asia and parts of South Asia. Red junglefowl are the primary ancestor of the domestic chicken (Gallus gallus domesticus), but the grey junglefowl, Sri Lankan junglefowl and green junglefowl have also contributed genetic materials to the gene pool of the chicken.[2][3]

Evidence from the molecular level derived from whole-genome sequencing revealed that chicken was domesticated from red junglefowl about 8,000 years ago[2], with this domestication event involving multiple maternal origins.[2][4] Since then, their domestic form has spread around the world and is kept globally as a source of meat and eggs.[5]

Numerous wild and domestic subspecies of Gallus gallus exist, including:

The nominate race of red junglefowl has a mix of feather colours, with orange, brown, red, gold, grey, white, olive and even metallic green plumage. The tail of the male roosters can grow up to 28 centimetres (11 in), and the whole bird may be as long as 70 centimetres (28 in). There are 14 tail feathers. A moult in June changes the bird's plumage to an eclipse pattern, which lasts through October. The male eclipse pattern includes a black feather in the middle of the back and small red-orange plumes spread across the body. Female eclipse plumage is generally indistinguishable from the plumage at other seasons, but the moulting schedule is the same as that of males.[7]

Male junglefowl are significantly larger than females and have brightly coloured decorative feathers. The male's tail is composed of long, arching feathers that initially look black, but shimmer with blue, purple, and green in direct light. He also has long, golden hackle feathers on his neck and on his back. The female's plumage is typical of this family of birds in being cryptic and adapted for camouflage. She alone looks after the eggs and chicks. She also has a very small comb and wattles (fleshy ornaments on the head that signal good health to rivals and potential mates) compared to the males. 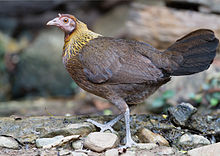 During their mating season, the male birds announce their presence with the well known "cock-a-doodle-doo" call or crowing.[8] Within flocks, only dominant males crow.[9] Male red junglefowl have a shorter crowing sound than domestic roosters; the call cuts off abruptly at the end.[8] This serves both to attract potential mates and to make other male birds in the area aware of the risk of fighting a breeding competitor. A spur on the lower leg just behind and above the foot serves in such fighting. Their call structure is complex and they have distinctive alarm calls for aerial and ground predators to which others react appropriately.[10][11]

The range of the wild form stretches from India eastwards across Indochina and southern China, into Malaysia, Singapore, the Philippines, and Indonesia. Junglefowl were one of three main animals (along with the domesticated pigs and dogs) carried by early Austronesian peoples from Island Southeast Asia in their voyages to the islands of Oceania in prehistory, starting at around 5,000 BP. Today their ancient descendants are found throughout Micronesia, Melanesia, and Polynesia.[12]

Red junglefowl prefer disturbed habitats and edges, both natural and human-created. Apparently the forage[13][14][9] and thick cover in these sorts of areas are attractive to junglefowl, especially nesting females.[15] Junglefowl use logged and regenerating forests[16] and often are found near human settlement [17] and areas regenerating from slash-and-burn cultivation [9].  Areas burned to promote bamboo growth also attract junglefowl because bamboo seeds are more available[14][15]. In some areas, red junglefowl are absent from silvicultural [16] and rubber [18] plantations, but elsewhere they occur in both tea and palm-oil plantations [18]. In Selangor Province, Malaysia, palm foliage provides suitable cover, and palm oil fruit provides adequate food.[19]  The palms also offer an array of roost sites, from the low perches (~4 m) favored by females with chicks to the higher perches (up to 12 m) used by other adults.[20]

Red junglefowl drink surface water when it is available, but they apparently do not require it.  Birds in North Central India visit water holes frequently during the dry season, although not all junglefowl in the region live close enough to water to do so[15]. Population densities may be lower, however, where surface water is limited[14].

Red junglefowl regularly bathe in dust to keep the right balance of oil in their plumage. The dust absorbs extra oil and subsequently falls off.[21]

Flight in these birds is almost purely confined to reaching their roosting areas at sunset in trees or any other high and relatively safe places free from ground predators, and for escape from immediate danger through the day.[citation needed]

Dominant male junglefowl appear to defend a territory against other dominant males, and the size of the territories has been inferred based on the proximity of roosts.  Beebe[17] concluded that territories were rather small, especially as compared to some of the pheasants with which he was familiar.  This was supported by Collias and Collias,[15] who reported that adjacent roost sites can be as close as 100 meters. Within flocks, male red junglefowl exhibit dominance hierarchies and dominant males tend to have larger combs than subordinate males.[22] Red junglefowl typically live in flocks of one to a few males and several females. Males are more likely to occur alone than are females.[15][14][9][23][24][25]

Males make a food-related display called "tidbitting", performed upon finding food in the presence of a female.[26] The display is composed of coaxing, cluck-like calls, and eye-catching bobbing and twitching motions of the head and neck. During the performance, the male repeatedly picks up and drops the food item with his beak. The display usually ends when the hen takes the food item either from the ground or directly from the male's beak. Mating then sometimes occurs.[27]

In many areas, red junglefowl breed during the dry portion of the year, typically winter or spring. This is true in parts of India, Nepal, Thailand, Vietnam, and Laos[14][15][9][23][24][25]. However, year-round breeding by red junglefowl has been documented in palm-oil plantations in Malaysia[19] and also may occur elsewhere [24]. During the laying period, red junglefowl females lay an egg every day. Eggs take 21 days to develop. Chicks fledge in about 4 to 5 weeks, and at 12 weeks old they are chased out of the group by their mother — at which point they start a new group or join an existing one. Sexual maturity is reached at 5 months, with females taking slightly longer than males to reach maturity.[7]

Dominant males attempt to maintain exclusive reproductive access to females, though females chose to mate with subordinate males about 40% of the time in a free-ranging feral flock in San Diego, USA[28][29].

Red junglefowl are attracted to areas with ripe fruit or seeds[15], including fruit plantations[18], fields of domestic grain[17], and stands of bamboo[9].  Although junglefowl typically eat fallen fruits and seeds on the ground, they occasionally forage in trees by perching on branches and feeding on hanging fruit[9].  Fruits and seeds of scores of plant species have been identified from junglefowl crops, along with leaves, roots, and tubers[9]. In addition, red junglefowl capture a wide variety of arthropods, other invertebrates, and vertebrates such as small lizards. Even mammalian feces may be consumed[9].  Many of these items are taken opportunistically as the birds forage, although some arthropods, such as termites, are taken in large quantities; about 1,000 individual termites have been found in a single crop[9][15]. Plant materials constitute a higher proportion of the diet of adult red junglefowl than do arthropods and other animals.  In contrast, chicks eat mostly adult and larval insects, earthworms, and only occasional plant material[9]. 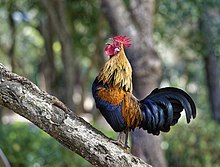 In 2012, a study examined mitochondrial DNA recovered from ancient bones from Europe, Thailand, the Pacific, and Chile, and from Spanish colonial sites in Florida and the Dominican Republic, in directly dated samples originating in Europe at 1,000 BP and in the Pacific at 3,000 BP. Chicken was primarily domesticated from red junglefowl, with subsequent genetic contributions from grey junglefowl, Sri Lankan junglefowl, and green junglefowl.[2] Domestication occurred about 8,000 years ago, as based on molecular evidence[2] from a common ancestor flock in the bird's natural range, and then proceeded in waves both east and west. Other archaeology evidence suggest domestication date around 7,400 BP from the Chishan site, in the Hebei province of China. However, domestication event in China has now been disputed by several studies citing unfavourable weather condition at the time[30][31]. In the Ganges region of India, red junglefowl were being used by humans as early as 7,000 years ago. No domestic chicken remains older than 4,000 years have been identified in the Indus Valley, and the antiquity of chickens recovered from excavations at Mohenjodaro is still debated.[5]

Retrieved from "http://en.turkcewiki.org/w/index.php?title=Red_junglefowl&oldid=958470218"
This website is a mirror of Wikipedia, and is not affiliated with the Wikimedia Foundation.
Categories:
Hidden categories: