Jump to navigation Jump to search
33,000 year old human remains in Swansea, Wales
This article is about the Welsh skeleton. For other uses, see Red Lady. 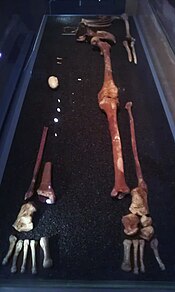 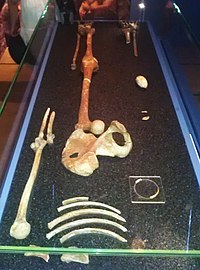 The Red Lady of Paviland is an Upper Paleolithic partial skeleton of a male dyed in red ochre and buried in Britain 33,000 BP.[1] The bones were discovered in 1823 by William Buckland in an archaeological dig at Goat's Hole Cave (Paviland cave) — one of the limestone caves between Port Eynon and Rhossili on the Gower Peninsula, south Wales.[2]

The remains were at first thought to be a Roman Britain era female, however more recent analysis indicates the bones are of a young male.

Goat's Hole was occupied throughout prehistory. Artefacts are predominantly Aurignacian, but also include examples from the earlier Mousterian, and later Gravettian and Creswellian periods.[3] The site is the oldest known ceremonial burial in Western Europe.[4]

In 1822 Daniel Davies and the Rev John Davies found animal bones, including the tusk of a mammoth. The Talbot family of Penrice Castle was informed and found "bones of elephants" on 27 December 1822. William Buckland, Professor of Geology at Oxford University arrived on 18 January 1823 and spent a week at Goat's Hole, in which his famous discovery took place.[5] Later that year, writing about his find in his book Reliquiae Diluvianae (Remains or relics of the Flood), Buckland stated:

I found the skeleton enveloped by a coating of a kind of ruddle ... which stained the earth, and in some parts extended itself to the distance of about half an inch [12 mm] around the surface of the bones ... Close to that part of the thigh bone where the pocket is usually worn surrounded also by ruddle [were] about two handfuls of the Nerita littoralis [periwinkle shells]. At another part of the skeleton, viz in contact with the ribs [were] forty or fifty fragments of ivory rods [also] some small fragments of rings made of the same ivory and found with the rods ... Both rods and rings, as well as the Nerite shells, were stained superficially with red, and lay in the same red substance that enveloped the bones

Buckland's treatise misjudged both its age and sex.[6][7] Buckland believed that human remains could not be older than the Biblical Great Flood, and thus wildly underestimated its true age, believing the remains to date to the Roman era.[3] Buckland believed the skeleton was female largely because it was discovered with decorative items, including perforated seashell necklaces and jewellery thought to be of elephant ivory but now known to be carved from the tusk of a mammoth.[8] These decorative items, combined with the skeleton's red dye, caused Buckland to mistakenly speculate that the remains belonged to a Roman prostitute or witch.

By the time a second archaeological excavation was undertaken to Paviland Cave in 1912, it was recognized through comparison with other discoveries that had been made in Europe that the remains were from the Palaeolithic. However, before radiocarbon dating was invented in the 1950s, there was no existing scientific method for the determination of the age of any prehistoric remains.[5] Early carbon dating has historically tended to give results which were underestimations of the age of samples, as radiocarbon dating techniques have developed and become more accurate, the age of the Red Lady of Paviland has gradually been pushed back.

Although now on the coast, at the time of the burial the cave would have been located approximately 110 km (70 miles) inland, overlooking a plain. When the remains were dated to some 26,000 years ago, it was thought the "Red Lady" lived at a time when an ice sheet of the most recent glacial period, in the British Isles called the Devensian Glaciation, would have been advancing towards the site, and that consequently the weather would have been more like that of present-day Siberia, with maximum temperatures of perhaps 10°C in summer, −20° in winter, and a tundra vegetation. The new dating however indicates he lived during a warmer period.

Bone protein analysis indicates that he lived on a diet of between 15% and 20% fish, which, together with the distance from the sea, suggests that the people may have been semi-nomadic, or that the tribe transported the body from a coastal region for burial.

When the skeleton was discovered, Wales lacked a museum to house it, so it was moved to Oxford University, where Buckland was a professor. In December 2007 it was loaned for a year to the National Museum Cardiff. Subsequent excavations yielded more than 4,000 flints, teeth and bones, needles and bracelets, which are on exhibit at Swansea Museum and the National Museum in Cardiff.

Analysis of the evidence from the two excavations at Long Hole Cave on the Gower Peninsula, including sediment and pollen as well as the lithic evidence, has identified Long Hole as an Aurignacian site contemporary with and related to the site at Paviland, evidence of the first modern humans in Britain.[10]

Retrieved from "http://en.turkcewiki.org/w/index.php?title=Red_Lady_of_Paviland&oldid=1035271560"
This website is a mirror of Wikipedia, and is not affiliated with the Wikimedia Foundation.
Categories:
Hidden categories: