Jump to navigation Jump to search
Creator of the webcomic xkcd
Not to be confused with Randy Monroe or Rendall Munroe.

Randall Patrick Munroe (born October 17, 1984)[1] is an American cartoonist, author, and engineer best known as the creator of the award-winning webcomic xkcd. With a background in physics and robotics, Munroe has worked full- time on the comic since late 2006, publishing three times a week to a very large audience.[2] Several of the strips, notably a visualisation of radioactivity levels, were also republished by other outlets. In addition to publishing a book of the webcomic's strips, he has written three books: What If?, Thing Explainer, and How To.

Munroe was born in Easton, Pennsylvania, and his father has worked as an engineer and marketer.[3] He has two younger brothers, and was raised as a Quaker.[3][4] He was a fan of comic strips in newspapers from an early age,[2] starting off with Calvin and Hobbes.[5] After graduating from the Chesterfield County Mathematics and Science High School at Clover Hill, a Renaissance Program in Midlothian, Virginia, he graduated from Christopher Newport University in 2006 with a degree in physics.[6][7][third-party source needed]

Munroe worked as a contract programmer and roboticist for NASA at the Langley Research Center,[8][5] before and after his graduation.[citation needed] In October 2006 NASA did not renew his contract,[7][third-party source needed] and he moved to Boston to begin writing xkcd full time.[8] 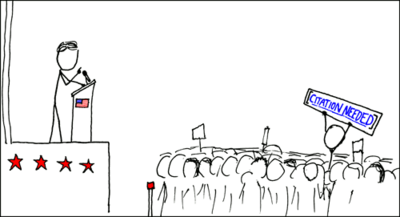 "Wikipedian Protester", published on xkcd.com with title-text (tooltip): "SEMI-PROTECT THE CONSTITUTION".[9] On Wikipedia, semi-protected pages may not be edited by new or unregistered users.

Munroe's blog, entitled xkcd, is primarily a stick figure comic. The comic's tagline describes it as "A webcomic of romance, sarcasm, math, and language".[10]

Munroe had originally used xkcd as an instant messaging screenname because he wanted a name without a meaning so he would not eventually grow tired of it.[11] He registered the domain name, but left it idle until he started posting his drawings, perhaps in September 2005.[5][third-party source needed] The webcomic quickly became very popular, garnering up to 70 million hits a month by October 2007.[12] Munroe has said, "I think the comic that's gotten me the most feedback is actually the one about the stoplights".[12][13]

Munroe now supports himself by the sale of xkcd-related merchandise, primarily thousands of t-shirts a month.[2][11] He licenses his xkcd creations under the Creative Commons attribution-noncommercial 2.5, stating that it is not just about the free culture movement, but that it also makes good business sense.[11]

In 2010, he published a collection of the comics.[14] He has also toured the lecture circuit, giving speeches at places such as Google's Googleplex in Mountain View, California.[15] 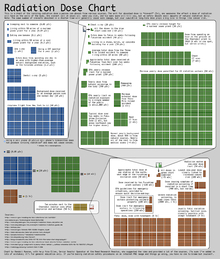 Various doses of radioactivity in sieverts, ranging from negligible to lethal

Munroe is the creator of the now defunct websites "The Funniest",[18] "The Cutest",[19] and "The Fairest",[20] each of which presents users with two options and asks them to choose one over the other.[citation needed]

In January 2008, Munroe developed an open-source chat moderation script named "Robot9000". Originally developed to moderate one of Munroe's xkcd-related IRC channels, the software's algorithm attempts to prevent repetition in IRC channels by temporarily muting users who send messages that are identical to a message that has been sent to the channel before. If users continue to send unoriginal messages, Robot9000 mutes the user for a longer period, quadrupling for each unoriginal message the user sends to the channel.[21][third-party source needed] Shortly after Munroe's blog post about the script went live, 4chan administrator Christopher Poole adapted the script to moderate the site's experimental /r9k/ board.[22] Twitch offers Robot9000 ("r9k mode") as an optional feature for broadcasters and moderators to use in their channels' chat boxes.[23]

In October 2008, The New Yorker magazine online published an interview and "Cartoon Off" between Munroe and Farley Katz, in which each cartoonist drew a series of four humorous cartoons.[24]

Munroe has a blog entitled What If?, where he has answered questions sent in by fans of his comics. These questions are usually absurd and related to math or physics, and he explains them using both his knowledge and various academic sources.[25] In 2014, he published a collection of some of the responses, as well as a few new ones and some rejected questions, in a book entitled What If?: Serious Scientific Answers to Absurd Hypothetical Questions.[14] Starting in November 2019, Munroe began writing a monthly column in the New York Times titled Good Question, answering user submitted questions in the same style as What If.[26]

In response to concerns about the radioactivity released by the Fukushima Daiichi nuclear disaster in 2011, and to remedy what he described as "confusing" reporting on radiation levels in the media, Munroe created a radiation chart of comparative radiation exposure levels.[27] The chart was rapidly adopted by print and online journalists in several countries,[citation needed] including being linked to by online writers for The Guardian,[28] and The New York Times.[29] As a result of requests for permission to reprint the chart and to translate it into Japanese, Munroe placed it in the public domain, but requested that his non-expert status should be clearly stated in any reprinting.[30]

Munroe published an xkcd-style comic on scientific publishing and open access in Science in October 2013.[31]

Munroe's book Thing Explainer, announced in May 2015 and published late that year, explains concepts using only the 1,000 most common English words.[14][32][33] The book's publisher, Houghton Mifflin Harcourt, saw these illustrations as potentially useful for textbooks, and announced in March 2016 that the next editions of their high school-level chemistry, biology, and physics textbooks will include selected drawings and accompanying text from Thing Explainer.[34][35]

In February 2019, Munroe announced his upcoming book How To, which was released in September of that year.[36][4]

In September 2013, Munroe announced that a group of xkcd readers had submitted his name as a candidate for the renaming of asteroid (4942) 1987 DU6 to 4942 Munroe. The name was accepted by the International Astronomical Union.[37][38]

As of May 2008[update], Munroe lived in Somerville, Massachusetts.[2]

In October 2010, Munroe's fiancée was diagnosed with stage 3 breast cancer; there had been no prior family history.[39][40] The emotional effect of her illness was referenced in the comic panel "Emotion", published 18 months later in April 2012.[41] In September 2011, he announced that they had married.[42] In December 2017, Munroe summarized the time since his wife's cancer diagnosis in a comic entitled "Seven Years".[43] He revisited the subject in November 2020 in a comic entitled "Ten Years".[44]

His hobbies and interests include kite photography, in which cameras are attached to kites and photographs are then taken of the ground or buildings.[45]

Publications with contributions by Munroe[edit]

Randall Munroeat Wikipedia's sister projects
Retrieved from "http://en.turkcewiki.org/w/index.php?title=Randall_Munroe&oldid=1000952109"
This website is a mirror of Wikipedia, and is not affiliated with the Wikimedia Foundation.
Categories:
Hidden categories: