Jump to navigation Jump to search
Japenese e-commerce company
This article is about the Japanese corporation. For its US e-commerce website, see Rakuten.com. 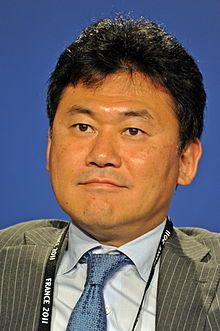 Rakuten, Inc. (楽天株式会社, Rakuten Kabushiki-gaisha) (Japanese pronunciation: [ɾakɯ̥teɴ]) is a Japanese electronic commerce and online retailing company based in Tokyo, founded in 1997 by Japanese businessman Hiroshi Mikitani. Its B2B2C E-Commerce platform Rakuten Ichiba is the largest e-commerce site in Japan and among the world's largest by sales.[2] The company operates Japan's biggest Internet bank and number one credit card company by transaction value.[3] It also offers e-commerce, fintech, digital content and communications services to over one billion members around the world, and operates in 29 countries and regions.[4] It is often referred to as "the Amazon of Japan".[5]

In 2015, Rakuten relocated its corporate headquarters from Shinagawa to the Tamagawa neighbourhood of Setagaya-ku, to consolidate its Tokyo offices and to accommodate future growth.[8] In 2016, the company's revenues totaled US$7.2 billion with operating profits of about US$347.9 million. As of June 2017, Rakuten reported it had a total of 14,826 employees worldwide.[9]

On 16 November 2016, Rakuten announced a €220 million deal for global sponsorship with Spanish football club FC Barcelona starting in the 2017–2018 La Liga season through 2020, replacing Qatar Airways for this role.[10] Rakuten's app Viber will also be the club's official communication channel.[11] In May 2018, Rakuten announced a new wireless mobile network in Japan.[12]

Rakuten was founded as MDM, Inc. by Hiroshi Mikitani on 7 February 1997.[13] The online shopping marketplace Rakuten Shopping Mall (楽天市場, Rakuten Ichiba) was officially launched on May 1, 1997.[14] The company had six employees and the website had 13 merchants.[citation needed] The name was changed to Rakuten in June 1999.[14] The Japanese word "rakuten" means "optimism".[15]

Harvard-educated former banker Mikitani envisioned the site as an online shopping mall, offering the opposite of what the larger companies like IBM were trying to do with similar services, by offering empowerment to merchants rather than trying to tightly control the virtual storefront. The service was offered for a smaller fee than the larger Internet malls were charging, and merchants were given more control, such as the ability to customize their storefronts on the site.[16][17]

In March 2001, online hotel reservation service Rakuten Travel was launched.[14] In April 2002, a new system was introduced for merchants, combining monthly fixed fees with commissions on sales. That November, the Rakuten Super Point Program, a membership loyalty program, was introduced.[14]

In September 2004, Rakuten grew its financial services businesses by acquiring consumer finance company Aozora Card Co., Ltd., later renaming it Rakuten Card Co., Ltd.[14][19] The company began offering a Rakuten credit card in 2005.[20] By November 2016, the Rakuten card was held by over 13 million people, and nearly 40% of Rakuten's revenue was from financial services, as it was operating Japan's largest Internet bank and third-largest credit company.[3] Rakuten card holders are a part of a point-based membership program, and can use those points to make purchases on the Internet mall.[3] In 2016, the company introduced Rakuten Pay, an app-based smartphone payment system.[3]

In December 2005, Rakuten established the Rakuten Institute of Technology in Tokyo as its department in charge of research and development.[14]

In a joint venture in February 2008, Rakuten and President Chain Store established Rakuten's first e-commerce site outside of Japan with Rakuten Ichiba Taiwan.[14]

Around 2011, Rakuten started heavily expanding outside of Japan, with prominent moves including a stake in Canadian e-book maker Kobo Inc. and an investment in Pinterest.[21] In 2011, Rakuten launched Indonesia's Rakuten Belanja Online. By late 2012, Rakuten had moved into online retail in Austria, Canada, Spain, Taiwan and Thailand and into the online travel markets in France—with Voyager Moins Cher.com—and China, Hong Kong, Korea and Taiwan—with its Tokyo-based international Rakuten Travel platform. In North America, Rakuten Golf made booking tee time online possible. To increase its global competitiveness, and to better incorporate non-Japanese speakers, Rakuten decided to adopt English as the company's official language starting in 2012.[22][23][24][25] By 2016, nearly 40% of the company's engineers in Japan were non-Japanese.[25]

In March 2015, Rakuten announced that it would begin accepting bitcoin across its global marketplaces, shortly after investing in San Francisco–based bitcoin payments-processing startup Bitnet Technologies. Rakuten has been a strong supporter of bitcoin's potential, and was one of the first major companies to accept bitcoin for payment.[26]

In 2016, Rakuten shut down retailing websites in the UK, Spain, Austria, Singapore, Indonesia and Malaysia.[3]

On November 16, 2016, Rakuten announced it had agreed to a four-year partnership with the La Liga football club FC Barcelona, one of the most successful football teams in Europe. The agreement would see Rakuten become FC Barcelona's main global partner beginning with the 2017-18 season, with its name appearing on match-day jerseys. The deal was worth at least €220 million and includes an option for a one-year extension.[27]

Rakuten partnered with California-based Blackstorm Labs to launch an online social gaming platform called R Games in April 2017, going live with 15 free games optimized for smartphones, including Pac-Man and Space Invaders.[28][29] The games are based on HTML5, which can be played across any device and on any platform, and Rakuten will tap into its worldwide database of 114 million online shoppers. Rakuten plans to integrate R Games into its messaging app Viber.[29]

In September 2017, Rakuten signed a three-year, $60 million deal to become the official sponsor for the jersey patch on the front of the uniforms for the Golden State Warriors of the NBA.[30]

Rakuten partnered with Walmart for a late push on e-books in January 2018.[31]

In September 2019, negotiations with Lamigo Monkeys to acquire the team closed successfully.[32] With the sale, Rakuten became the first foreign company to own a Chinese Professional Baseball League team.[33] Terms of the sale were not disclosed.[34] The team name was formally changed to the Rakuten Monkeys on 17 December 2019. New uniforms, similar in design to those of the Tohoku Rakuten Golden Eagles were released.[35]

In September 2002, the company acquired MyTrip.net, which was merged with Rakuten Travel the following year.[14]

In 2010, Rakuten bought French online retailer PriceMinister for €200 million[40] and US-based Buy.com for US$250 million.[41][42] The group had been a significant shareholder in Ctrip, a Chinese travel site until it sold its stake in the company in August 2007 and, in 2010, it announced a joint venture with Baidu in China (Lekutian).[43][44]

In June 2011, Rakuten acquired Brazilian e-commerce firm Ikeda — since renamed Rakuten Brazil. In July, it bought German e-commerce start-up Tradoria and rebranded it Rakuten Deutschland, and in September UK online retailer and e-commerce marketplace Play.com for £25 million (almost $41 million), which was converted into the points-based loyalty program Rakuten.co.uk.[45] In September 2011, Rakuten took a minority equity stake in Russian online retailer Ozon.ru, dubbed "Russia's Amazon", which had reported 2010 sales worth US$137 million.[46] A four-company-strong consortium, led by the Japanese group, invested US$100 million. Rakuten's stake was not revealed.[47] Rakuten announced an agreement to buy Canadian e-book reader company Kobo from Indigo Books and Music, operated by Heather Reisman (founder, Chair and CEO), in November,[48][49] with the deal finalized in January 2012.[50] The price was said to be US$315 million.[51]

In July 2012, Rakuten led a $100 million investment in Pinterest, at a $1.5 billion valuation.[5] Its partners were existing investors Andreessen Horowitz, Bessemer Venture Partners, and FirstMark Capital, and a number of investment “angels”. That investment marked the start of a drive to expand Pinterest's presence in Japan and Rakuten's 17 other global markets.[52]

On 13 June 2012, Rakuten bought Wuaki.tv, a Spanish video on demand (VOD) service/company that is one of the largest in Europe and the market leader in Spain; as of July 2017, it has 5 million users across 12 markets in Europe.[53] The purchase opened new opportunities, directly challenging Amazon, Netflix and others for domination of the VOD market, starting in Europe.[54] In July 2017, wuaki.tv was rebranded to Rakuten TV. In November 2012, Rakuten bought French online retail delivery company Alpha Direct Services, to increase speed and quality of delivery.[55]

In May 2013, Rakuten acquired a majority share in "citizen commerce" site Daily Grommet,[57] since rebranded as The Grommet.[58] In June 2013, Rakuten announced its acquisition of U.S.-based logistics and services company Webgistix, specializing in fulfillment technology for e-commerce retailers.[59] The acquisition was Rakuten's second logistics investment outside Japan and enables prompt fulfillment in the U.S.

On February 13, 2014, Rakuten announced the acquisition of Tel Aviv-based web messaging company Viber Media for $905 million, to link up messaging with e-commerce.[62] The Viber app is for making phone calls and sending free messages.[21][24]

On May 29, 2014, Rakuten Marketing acquired DC Storm, a UK-based technology company which specializes in marketing attribution modeling and data-driven marketing.[63]

In August 2014, Rakuten announced its purchase of Slice, a US company that provides online shopping services and sells business intelligence based on digital commerce measurement, for an undisclosed sum.[64]

In September 2014, it was revealed that Rakuten would acquire US rebate site operator Ebates Inc. for approximately US$952 million to give the company more access to US consumers and help it grow abroad, as it takes on rivals such as Amazon.com and Alibaba. Ebates offers coupons and cash rebates to customers who shop at its more than 1,700 partner retailers.[24]

In January 2015, Rakuten entered the sport of football by acquiring Vissel Kobe, a top J-League team formed in 1995.[65]

In March 2015, Rakuten announced the acquisition of OverDrive, Inc., a wholesale distributor of e-books and other digital content that serves libraries and retailers, based in Cleveland, Ohio. The acquisition price was $410 million in cash.[66]

Since 2015, Rakuten has invested in several ride-hailing services. In March 2015, Rakuten led a $530 million round of venture financing for Lyft, spending $300 million for a 12% stake in the company.[67][68] In April 2016, Rakuten announced it would invest an additional $92 million in Cabify, which was founded in 2012 in Spain and is one of the largest ride-hailing services in Latin America. Rakuten previously invested $3 million in Cabify in 2015.[69] Rakuten led a $500 million Series E round of funding in Middle Eastern transportation startup Careem, which closed out in June 2017.[70]

In April 2016, Rakuten participated in a $30 million round of financing for investing app Acorns.[71]

In August 2016, Rakuten confirmed that it had acquired the assets of bitcoin wallet startup Bitnet, with the assets to be used to create a research facility, Rakuten Blockchain Lab, based in Belfast that will explore the potential of the blockchain.[72]

In April 2017, Rakuten invested US$2.4 million in Singapore-based MetroResidences, which allows homeowners to rent their properties out to companies and corporate tenants.[73]

In January 2018, the Group purchased Asahi Fire and Marine from Japanese bank Nomura for an estimated 45 billion Yen. This will be the first foray for Rakuten into the general insurance market, and Asahi will become a wholly owned subsidiary. The company provides fire, automotive and accident insurance to consumer and corporate clients.[74]

The company announced plans to launch its own cryptocurrency in March 2018.[75] In June 2018, Rakuten purchased Palo Alto based retail pickup startup, Curbside Inc.[76] In October 2018, CafeX Communications announced that Rakuten Communications Corp., the telecommunications company within Japan-based Rakuten Group, has launched 'Connect Live', a cloud service powered by CafeX that enables business users to collaborate more easily in web browsers and mobile devices. Employees, customers and online visitors can simply click a link in a web browser to connect without needing to download new software or step through a sign-in process. Attendees can also join from mobile devices too.[77]

In December 2019, it was reported that Rakuten would be selling OverDrive, Inc. to Private Equity firm KKR. The price of the sale was not disclosed, though Rakuten said it would recognize about $365.6 million in profit from the sale in the first quarter of 2020. OverDrive's purchase from Rakuten was engineered by KKR’s Richard Sarnoff, a one-time executive at Random House who also was president of Bertelsmann Digital Media Investments until leaving for KKR in 2011.[78]

In March 2014, UK-based Environmental Investigation Agency (EIA) named the company as the world's biggest online retailer of whale meat and elephant ivory, calling on the company to stop selling the items. In April 2014, Rakuten announced that it was ending all online sales of whale and dolphin meat by the end of the month.[80] In July 2017, Rakuten announced that it was banning ivory sales on its sites.[81]

Retrieved from "http://en.turkcewiki.org/w/index.php?title=Rakuten&oldid=960409569"
This website is a mirror of Wikipedia, and is not affiliated with the Wikimedia Foundation.
Categories:
Hidden categories: