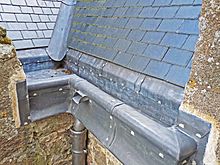 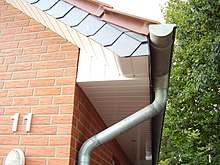 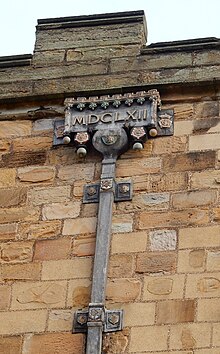 A rain gutter, eavestrough or surface water collection channel is a component of a water discharge system for a building.[1] It is necessary to prevent water dripping or flowing off roofs in an uncontrolled manner for several reasons: to prevent it damaging the walls, drenching persons standing below or entering the building, and to direct the water to a suitable disposal site where it will not damage the foundations of the building. In the case of a flat roof, removal of water is clearly essential to prevent water ingress and to prevent a build-up of excessive weight.

Water from a pitched roof flows down into a valley gutter, a parapet gutter or an eaves gutter. An eaves gutter is also known as an eavestrough (especially in Canada), rhone (Scotland)[2], eaves channel, dripster, guttering, rainspouting or simply as a gutter.[3] The word gutter derives from Latin gutta (noun), meaning "a droplet".[4]

Guttering in its earliest form consisted of lined wooden or stone troughs. Lead was a popular liner and is still used in pitched valley gutters. Many materials have been used to make guttering: cast iron, asbestos cement, UPVC (PVCu), cast and extruded aluminium, galvanized steel, wood, copper, zinc, and bamboo.

Gutters prevent water ingress into the fabric of the building by channelling the rainwater away from the exterior of the walls and their foundations. [5] Water running down the walls causes dampness in the affected rooms and provides a favourable environment for growth of mould, and wet rot in timber.[citation needed]

A rain gutter may be a:

A roof must be designed with a suitable fall to allow the rainwater to discharge. The water drains into a gutter that is fed into a downpipe. A flat roof will have a watertight surface with a fall of 1 in 60, or 1 in the case of lead. They can drain internally or to an eaves gutter, which has a minimum 1 in 360 fall towards the downpipe. [7] The pitch of a pitched roof is determined by the construction material of the covering. For slate this will be at 25%, for machine made tiles it will be 35%. Water falls towards a parapet gutter, a valley gutter or an eaves gutter. [8] When two pitched roofs meet at an angle, they also form a pitched valley gutter: the join is sealed with valley flashing. Parapet gutters and valley gutters discharge into internal rainwater pipes or directly into external down pipes at the end of the run. [8]

The capacity of the gutter is a significant design consideration. The area of the roof is calculated (metres) and this is multiplied by rainfall (litres/sec/metres²) which is assumed to be 0.0208. This gives a required discharge outfall capacity. (litres/sec) .[9] Rainfall intensity, the amount of water likely to generated in a two-minute rainstorm is more important that average rainfall, the British Standards Institute[10] notes that an indicative storm in Essex, (annual rainfall 500mm per annum) delivers 0.022 l/s/m²- while one in Cumbria (annual rainfall 1800mm per annum) delivers 0.014 l/s/m².[11]

Eaves gutters can be made from a variety of materials such as cast iron, lead, zinc, galvanised steel, painted steel, copper, painted aluminium, PVC (and other plastics) and occasionally from concrete, stone, and wood.[12] 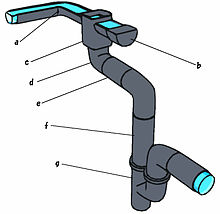 Water collected by a rain gutter is fed, usually via a downpipe (also called a leader or conductor),[13] from the roof edge to the base of the building where it is either discharged or collected.[14] The down pipe can terminate in a shoe and discharge directly onto the surface, but using modern construction techniques would be connected through an inspection chamber to a drain that led to a surface water drain or soakaway. Alternatively it would connect via a gulley (u-bend) with 50mm water seal to a combined drain.[15] Water from rain gutters may be harvested in a rain barrel or a cistern.[16]

Rain gutters can be equipped with gutter screens, micro mesh screens, louvers or solid hoods to allow water from the roof to flow through, while reducing passage of roof debris into the gutter.[17]

The Romans brought rainwater systems to Britain. The technology was subsequently lost, but was re-introduced by the Normans. The White Tower, at the Tower of London had external gutters. In March 1240 the Keeper of the Works at the Tower of London was ordered by King Henry "to have the Great Tower whitened both inside and out". This was according to the fashion at the time. Later that year the king wrote to the Keeper, commanding that the White Tower's lead guttering should be extended with the effect that "the wall of the tower ... newly whitened, may be in no danger of perishing or falling outwards through the trickling of the rain".[19]

In Saxon times, the thanes erected buildings with large overhanging roofs to throw the water clear of the walls in the same way that occurs in thatched cottages. The cathedral builder used lead parapet gutters, with elaborate gargoyles for the same purpose. With the dissolution of the monasteries- those buildings were recycled and there was plenty of lead that could be used for secular building. The yeoman would use wooden gutters or lead lined wooden gutters. 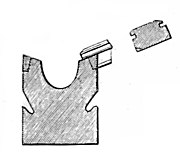 Cross section of a Paxton gutter with glazing bar

When The Crystal Palace was designed in 1851 by Joseph Paxton with its innovative ridge-and-furrow roof, the rafters that spanned the space between the roof girders of the glass roof also served as the gutters. The wooden Paxton gutters had a deep semi-circular channel to remove the rainwater and grooves at the side to handle the condensation. They were under trussed with an iron plate and had preformed notches for the glazing bars: they drained into a wooden box gutter that drained into and through structural cast iron columns.[20]

The industrial revolution introduced new methods of casting-iron and the railways brought a method of distributing the heavy cast-iron items to building sites. The relocation into the cities created a demand for housing that needed to be compact. Dryer houses controlled asthma, bronchitis, emphysema as well as pneumonia. In 1849 Joseph Bazalgette proposed a sewerage system for London, that prevented run-off being channelled into the Thames. By the 1870s all houses were constructed with cast iron gutters and down pipes. The Victorian gutter was an ogee, 115 mm in width, that was fitted directly to the fascia boards eliminating the need for brackets. Square and half-round profiles were also available. For a brief period after the first world war asbestos-cement guttering became popular due to it being maintenance free: the disadvantages however ensured this was a short period: it was more bulky and fractured on impact [21]

Cast iron gutters were introduced in the late 18th century as an alternative to lead. Cast iron enabled eaves gutters to be mass-produced: they were rigid and non-porous while lead could only be used as a liner within timber gutters. Installation was a single process and didn't require heat.[22] They could be attached directly to the fascia board. Cast iron gutters are still specified for restoration work in conservation areas, but are usually replaced with cast aluminium made to the same profile. Extruded aluminium gutters can be made to a variety of profiles from a roll of aluminium sheet on site in lengths of up to 30 m. They feature internal brackets at 400 mm spacing.[23]

In UK domestic architecture, guttering is often made from UPVC sections. The first PVC pipes were introduced in the 1930s for use in sanitary drainage systems. Polyethylene was developed in 1933. The first pressurised plastic drinking water pipes were installed in the Netherlands in the 1950s. During the 1960s rain water pipes, guttering and down pipes using plastic materials were introduced followed by PVC soil systems which became viable with the introduction of ring seals. A British Standard was launched for soil systems, local authorities started to specify PVC systems. By 1970 plastic rainwater systems accounted for over 60% of new installations.[citation needed] A European Standard EN607 has existed since 2004.[citation needed]

High quality stainless steel guttering systems are available for homes and commercial projects. The advantage of stainless steel is durable, not rust, easy to clean, nice appearance, compared with the ordinary concrete gutter, the stainless steel gutter will produce the extension effect with the temperature rising, in some local positions due to the stress can not be completely released there will be some deformation phenomenon, which will cause phenomenon of water ponding, for these locations with the up and down motion less than 10mm generally does not affect the use of gutter.

Seamless gutters have the advantage of being produced on site with a portable roll forming machine to match the specifications of the structure and are generally installed by experienced tradesman. Do your research on local companies before deciding on a contractor. The ones in business the longest with good reviews are usually the best. If possible meet with a contractor/owner and not a commissioned salesman.If considering doing your own gutters with materials from Lowes or similar keep in mind that the aluminum is near paper thin and will proportionately shrink and swell with temperature changes causing joints to leak with associated damages to the structure. Seamless gutter is .027" thick and if properly installed will last 30+ years. [26]

In commercial and domestic architecture, guttering is often made from zinc coated mild steel for corrosion resistance. Metal gutters with bead stiffened fronts is governed in the UK by BS EN612:2005.

Finlock gutters, a proprietary name[27] for concrete gutters, can be employed on a large range of buildings. There were used on domestic properties in the 1950s and 1960s, as a replacement for cast iron gutters when there was a shortage of steel and surplus of concrete.[citation needed] They were discredited after differential movement was found to open joints and allow damp to penetrate, but can be fitted with an aluminium and bitumastic liner.[28] Finlock concrete gutter units are made up of two troughs – one is the visible gutter and the other sits across the cavity wall. The blocks which can range from 8 to 12 inches (200 to 300 mm) can be joined using reinforcing rods and concrete, to form lintels for doors and windows.[28]

Guttering can be made from any locally available material such as stone or wood. Porous materials may be lined with pitch or bitumen.

Today in Western construction we use mainly three types of gutter - K-Style, Round, Square. In days past there were 12 gutter shapes/styles. K-Style gets its name from its letter designation being the eleventh out of the twelve.

Gutter guards (also called gutter covers, gutter protection or leaf guards) are primarily aimed at preventing damage caused from clogged gutters and reducing the need for regular gutter cleaning. They are a common add-on or included as an option for custom-built homes.

Brush gutter guards resemble pipe cleaners and are easy to install. They prevent large debris from clogging gutters, but are less effective at reducing smaller debris.

Foam gutter guards look like styrofoam and are also easy to install. They fit into gutters, so they prevent large objects from obstructing waterflow, but they do not prevent algae and plant growth.

Reverse curve or surface tension guards reduce clogged gutters by narrowing the opening of the gutters. Many find them to be unattractive and difficult to maintain.

Screen gutter guards are among the most common and most effective. They can be snapped on or mounted, made of metal or plastic. Micromesh gutter guards provide the most protection from small and large debris.

Retrieved from "http://en.turkcewiki.org/w/index.php?title=Rain_gutter&oldid=942200691"
This website is a mirror of Wikipedia, and is not affiliated with the Wikimedia Foundation.
Categories:
Hidden categories: