Quantitative analysis is the use of mathematical and statistical methods (mathematical finance) in finance. Those working in the field are quantitative analysts (or, in financial jargon, a quant). Quants tend to specialize in specific areas which may include derivative structuring or pricing, risk management, algorithmic trading and investment management. The occupation is similar to those in industrial mathematics in other industries.[1] The process usually consists of searching vast databases for patterns, such as correlations among liquid assets or price-movement patterns (trend following or mean reversion). The resulting strategies may involve high-frequency trading.

Although the original quantitative analysts were "sell side quants" from market maker firms, concerned with derivatives pricing and risk management, the meaning of the term has expanded over time to include those individuals involved in almost any application of mathematical finance, including the buy side.[2] Examples include statistical arbitrage, quantitative investment management, algorithmic trading, and electronic market making. 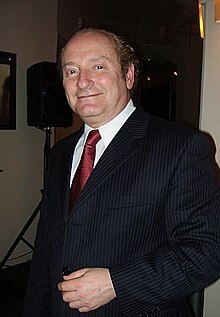 Robert C. Merton, one of the pioneers of quantitative analysis, promoted stochastic calculus into the study of finance.

Quantitative finance started in 1900 with Louis Bachelier's doctoral thesis "Theory of Speculation", which provided a model to price options under a normal distribution.

Harry Markowitz's 1952 doctoral thesis "Portfolio Selection" and its published version was one of the first efforts in economics journals to formally adapt mathematical concepts to finance (mathematics was until then confined to mathematics, statistics or specialized economics journals).[3] Markowitz formalized a notion of mean return and covariances for common stocks which allowed him to quantify the concept of "diversification" in a market. He showed how to compute the mean return and variance for a given portfolio and argued that investors should hold only those portfolios whose variance is minimal among all portfolios with a given mean return. Although the language of finance now involves Itō calculus, management of risk in a quantifiable manner underlies much of the modern theory.

In 1965 Paul Samuelson introduced stochastic calculus into the study of finance.[4][5] In 1969 Robert Merton promoted continuous stochastic calculus and continuous-time processes. Merton was motivated by the desire to understand how prices are set in financial markets, which is the classical economics question of "equilibrium", and in later papers he used the machinery of stochastic calculus to begin investigation of this issue.

At the same time as Merton's work and with Merton's assistance, Fischer Black and Myron Scholes developed the Black–Scholes model, which was awarded the 1997 Nobel Memorial Prize in Economic Sciences. It provided a solution for a practical problem, that of finding a fair price for a European call option, i.e., the right to buy one share of a given stock at a specified price and time. Such options are frequently purchased by investors as a risk-hedging device. In 1981, Harrison and Pliska used the general theory of continuous-time stochastic processes to put the Black–Scholes model on a solid theoretical basis, and showed how to price numerous other derivative securities.[6]

This demand for quantitative analysts has led to a resurgence in demand for actuarial qualifications as well as creation of specialized Masters and PhD courses in financial engineering, mathematical finance, computational finance, and/or financial reinsurance. In particular, Master's degrees in mathematical finance, financial engineering, operations research, computational statistics, machine learning, and financial analysis are becoming more popular with students and with employers. See Master of Quantitative Finance; Master of Financial Economics.

In sales and trading, quantitative analysts work to determine prices, manage risk, and identify profitable opportunities. Historically this was a distinct activity from trading but the boundary between a desk quantitative analyst and a quantitative trader is increasingly blurred, and it is now difficult to enter trading as a profession without at least some quantitative analysis education. In the field of algorithmic trading it has reached the point where there is little meaningful difference. Front office work favours a higher speed to quality ratio, with a greater emphasis on solutions to specific problems than detailed modeling. FOQs typically are significantly better paid than those in back office, risk, and model validation. Although highly skilled analysts, FOQs frequently lack software engineering experience or formal training, and bound by time constraints and business pressures, tactical solutions are often adopted.

Quantitative analysis is used extensively by asset managers. Some, such as FQ, AQR or Barclays, rely almost exclusively on quantitative strategies while others, such as Pimco, Blackrock or Citadel use a mix of quantitative and fundamental methods.

Major firms invest large sums in an attempt to produce standard methods of evaluating prices and risk. These differ from front office tools in that Excel is very rare, with most development being in C++, though Java and C# are sometimes used in non-performance critical tasks. LQs spend more time modeling ensuring the analytics are both efficient and correct, though there is tension between LQs and FOQs on the validity of their results. LQs are required to understand techniques such as Monte Carlo methods and finite difference methods, as well as the nature of the products being modeled.

This has grown in importance in recent years, as the credit crisis exposed holes in the mechanisms used to ensure that positions were correctly hedged, though in no bank does the pay in risk approach that in front office. A core technique is value at risk, and this is backed up with various forms of stress test (financial), economic capital analysis and direct analysis of the positions and models used by various bank's divisions.

In the aftermath of the financial crisis, there surfaced the recognition that quantitative valuation methods were generally too narrow in their approach. An agreed upon fix adopted by numerous financial institutions has been to improve collaboration.

Model validation (MV) takes the models and methods developed by front office, library, and modeling quantitative analysts and determines their validity and correctness. The MV group might well be seen as a superset of the quantitative operations in a financial institution, since it must deal with new and advanced models and trading techniques from across the firm. Before the crisis however, the pay structure in all firms was such that MV groups struggle to attract and retain adequate staff, often with talented quantitative analysts leaving at the first opportunity. This gravely impacted corporate ability to manage model risk, or to ensure that the positions being held were correctly valued. An MV quantitative analyst would typically earn a fraction of quantitative analysts in other groups with similar length of experience. In the years following the crisis, this has changed. Regulators now typically talk directly to the quants in the middle office such as the model validators, and since profits highly depend on the regulatory infrastructure, model validation has gained in weight and importance with respect to the quants in the front office.

Because of their backgrounds, quantitative analysts draw from various forms of mathematics: statistics and probability, calculus centered around partial differential equations, linear algebra, discrete mathematics, and econometrics. Some on the buy side may use machine learning. The majority of quantitative analysts have received little formal education in mainstream economics, and often apply a mindset drawn from the physical sciences. Quants use mathematical skills learned from diverse fields such as computer science, physics and engineering. These skills include (but are not limited to) advanced statistics, linear algebra and partial differential equations as well as solutions to these based upon numerical analysis.

A typical problem for a mathematically oriented quantitative analyst would be to develop a model for pricing, hedging, and risk-managing a complex derivative product. These quantitative analysts tend to rely more on numerical analysis than statistics and econometrics. One of the principal mathematical tools of quantitative finance is stochastic calculus. The mindset, however, is to prefer a deterministically "correct" answer, as once there is agreement on input values and market variable dynamics, there is only one correct price for any given security (which can be demonstrated, albeit often inefficiently, through a large volume of Monte Carlo simulations).

A typical problem for a statistically oriented quantitative analyst would be to develop a model for deciding which stocks are relatively expensive and which stocks are relatively cheap. The model might include a company's book value to price ratio, its trailing earnings to price ratio, and other accounting factors. An investment manager might implement this analysis by buying the underpriced stocks, selling the overpriced stocks, or both. Statistically oriented quantitative analysts tend to have more of a reliance on statistics and econometrics, and less of a reliance on sophisticated numerical techniques and object-oriented programming. These quantitative analysts tend to be of the psychology that enjoys trying to find the best approach to modeling data, and can accept that there is no "right answer" until time has passed and we can retrospectively see how the model performed. Both types of quantitative analysts demand a strong knowledge of sophisticated mathematics and computer programming proficiency.

Retrieved from "http://en.turkcewiki.org/w/index.php?title=Quantitative_analysis_(finance)&oldid=972183774"
This website is a mirror of Wikipedia, and is not affiliated with the Wikimedia Foundation.
Categories:
Hidden categories: