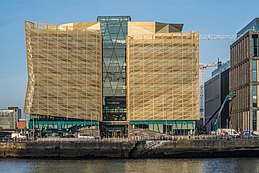 Central Bank of Ireland ("CBI") regulates QIAIFs. When Irish public tax scandals concerning the Section 110 SPV, also regulated by the CBI, emerged in 2016–2017, the CBI upgraded the little-used LQIAIF,[1] to give the same benefits as Section 110 SPVs, but with full confidentiality and tax secrecy.[2]

Qualifying Investor Alternative Investment Fund or QIAIF is a Central Bank of Ireland regulatory classification[a] established in 2013 for Ireland's five tax-free legal structures for holding assets. The Irish Collective Asset-management Vehicle or ICAV is the most popular of the five Irish QIAIF structures, and was designed in 2014 to rival the Cayman Island SPC; it is the main tax-free structure for foreign investors holding Irish assets.

In 2018, the Central Bank of Ireland expanded the Loan Originating QIAIF or L–QIAIF regime which enables the five tax-free structures to be used for closed-end debt instruments. The L–QIAIF is Ireland's main Debt–based BEPS tool as it overcomes the lack of confidentiality and tax secrecy of the Section 110 SPV.[b] It is asserted that many assets in QIAIFs and LQIAIFs are Irish assets being shielded from Irish taxation.[c][4] Irish QIAIFs and LQIAIFs can be integrated with Irish corporate base erosion and profit shifting ("BEPS") tax tools to create confidential routes out of the Irish tax system to Ireland's main Sink OFC, Luxembourg.[d]

In March 2019, the UN identified Ireland's "preferential tax regimes" for foreign funds on Irish assets as affecting the human rights of tenants in Ireland.[6][7]

Irish QIAIFs are subject to the EU Alternative Investment Fund Managers Directive 2011 (“AIFMD”) which lays out detailed rules on the process of constructing (e.g. diversification, leverage), managing (e.g. AIFM approved managers), and marketing (e.g. qualifying investors) of QIAIFs in Europe. However, the following are considered the most important features specific to Irish QIAIFs:[8][9][10]

Each of the five QIAIF legal wrappers have attributes designed for different uses. However, outside of entities that need the specific attributes of a trust law (and will use the Unit Trust QIAIF), or can only use a full company structure (and will use a VCC QIAIF), the ICAV is expected to be the dominant QIAIF wrapper.[24] 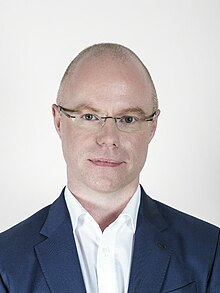 Stephen Donnelly TD uncovered abuses of Section 110 SPVs in 2016, and warned that making Commercial Property tax-free to foreign investors, via QIAIFs, would cause an office bubble and a housing crisis.[30][31]

Ireland is considered by some academic studies to be a major tax haven, and offshore financial centre, with a range of base erosion and profit shifting ("BEPS") tools.[32][33] Ireland's main Debt–based BEPS tool was the Section 110 SPV. However, Irish public tax scandals in 2016 concerning the use of this BEPS tool – involving artificial Irish children's charities – by U.S. distressed funds, assisted by the leading Irish tax-law firms, to avoid billions in Irish taxes damaged its reputation (see Section 110 abuses).[33]

In late 2016, the Central Bank of Ireland began a consultation process to upgrade the little-used L–QIAIF regime.[1][34] In February 2018, the Central Bank of Ireland changed its AIF "Rulebook" to allow L–QIAIFs hold the same assets that Section 110 SPVs could own. However, the upgraded L-QIAIFs offered two specific improvements over the Section 110 SPV which make L–QIAIFs a superior Debt–based BEPS tool:[14][35]

Three months after the Irish Central Bank updated its AIF "Rulebook", the Irish Revenue Commissioners issued new guidance in May 2018 on Section 110 SPV taxation which would further reduce their attractiveness as a mechanism to avoid Irish taxes on Irish assets.[36] In June 2018, the Central Bank of Ireland reported that €55 billion of U.S.-owned distressed Irish assets, equivalent to almost 25% of Irish GNI*, moved out of Section 110 SPVs.[2][3][37] The L-QIAIF, and the ICAV wrapper, in particular, is expected to become an important structure for managing Irish tax on Irish assets in a confidential manner.[c][38]

Ireland has Irish Real Estate Funds (IREFs) for holding direct Irish property which are not tax-free, their holdings relate to Irish quoted REITs (e.g. Green REIT plc), and insurance assets. The investments by US distressed debt funds in Irish property are via loan acquisitions and thus use L-QIAIFs.[3][38] In addition, foreign investors in Irish property can still use the L-QIAIF by holding via structured loans domiciled abroad, thus also avoiding Irish taxes in a confidential manner.[39][40] 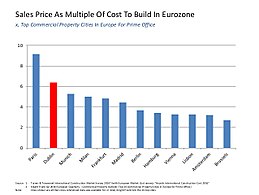 Comparison of the sales price as multiple of the cost of build, for a prime office in Dublin, with EU–28 countries (2016).

The QIAIF regime has contributed to making the International Financial Services Centre (IFSC) one of the largest fund domiciling and shadow banking locations in Europe.[33] Many asset managers, and particularly alternative investment managers, use Irish QIAIF wrappers in structuring funds. However, fund structuring is a competitive market and other corporate tax havens such as Luxembourg offer equivalent products. It is asserted that many of the assets in Irish QIAIFs are Irish assets, and particularly from the sale of over €100 billion in distressed assets by the Irish State from 2012–2017.[4][22][23] 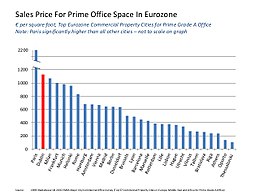 Comparison of the sales price of Dublin prime office with EU–28 countries (2016).

Irish QIAIFs have been used in tax avoidance on Irish assets.[21][41][42][43] It transpired that the regulator of Irish QIAIFs, the Central Bank of Ireland, was paying rent to a U.S. entity using an Irish QIAIF ICAV to avoid Irish taxes on the rent.[44] Irish QIAIFs have been used to circumvent international regulations,[45] on avoiding tax laws in the EU and the U.S.[46][47] Irish QIAIFs can be combined with Irish corporate BEPS tools (e.g. the Orphaned Super–QIF),[48] to create confidential routes out of the Irish corporate tax system to other tax havens such as Luxembourg,[5] the main Sink OFC for Ireland.[48][49][50]

QIAIFs link Ireland's strength as a corporate-focused tax haven, with the world's largest corporate BEPS tools,[32] to more traditional tax haven type activities (why Cayman SPCs are re-domiciling as Irish ICAVs).[51] The launch of the Irish ICAV was widely covered, and praised, by the leading offshore magic circle law firms,[12] the largest of which, Maples and Calder, claimed to have been one of its chief architects.[11]

The ability of foreign institutions to use QIAIFs and the ICAV wrapper, to avoid Irish taxes on Irish assets, has been linked to the bubble in Dublin commercial property, and by implication, the Dublin housing crisis.[30][31][33] Despite Dublin's housing crisis, and issues of housing affordability, foreign landlords (also called "cuckoo funds") operate in Ireland on a tax-free basis.[4][7] It is asserted that property development, and over-inflation of property prices via tax incentives, are favoured historical economic strategies of the two main Irish political parties, Fianna Fáil and Fine Gael.[52][e]

This risk of QIAIFs was highlighted in 2014 when Central Bank of Ireland consulted the European Systemic Risk Board ("ESRB") after initial, and unsuccessful, lobbying by IFSC tax-law firms to expand the L–QIAIF regime, so as to remove Irish taxation from Irish loan investments.[54][f]

In March 2019, the UN Special Rapporter on housing, Leilani Farha, formally wrote to the Irish Government on behalf of the UN, regarding its concerns regarding "preferential tax laws" for foreign investment funds on Irish assets which were compromising the human rights of tenants in Ireland.[6][7]

In April 2019, Irish technology entrepreneur Paddy Cosgrave launched a Facebook campaign to highlight abuses of QIAIFs and L-QIAIFs, stating: "The L-QIAIF runs the risk of being a weapon of mass destruction".[33][55]

Retrieved from "http://en.turkcewiki.org/w/index.php?title=Qualifying_investor_alternative_investment_fund_(QIAIF)&oldid=923491258"
This website is a mirror of Wikipedia, and is not affiliated with the Wikimedia Foundation.
Categories:
Hidden categories: