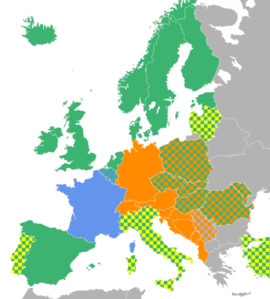 Geographic distribution of keyboards in Europe:

The QWERTZ or QWERTZU keyboard is a typewriter and keyboard layout widely used in Central Europe. The name comes from the first six letters at the top left of the keyboard: (Q W E R T Z). 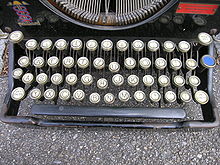 The main difference between QWERTZ and QWERTY is that the positions of the Z and Y keys are switched (hence the nickname "kezboard"). This change was made for two major reasons:

Similar to many other non-English keyboards:

Some of special key inscriptions are often changed from an abbreviation to a graphical symbol (for example caps lock becomes a hollow arrow pointing down, backspace becomes a left-pointing arrow). In German and Austrian keyboards, most of the other abbreviated labels are in German: "Ctrl" (control) is translated to its German equivalent "Strg" for Steuerung, and "Delete" is abbreviated "Entf" (entfernen). "Esc" and "Enter" on the numeric keypad are not translated, however. (See: German keyboard layout#Key labels)

The QWERTZ layout is fairly widely used in Germany and in the majority of Central European and Balkan countries that use the Latin script. Many German-speaking regions use this layout, but the German-speaking East Cantons of Belgium uses the AZERTY instead.

QWERTZ is the default keyboard layout for the Albanian language in Microsoft Windows.[citation needed]

German keyboard layout “T2” according to DIN 2137:2012-06.
The characters shown in black are present in the traditional “T1” layout also.

The PC keyboard layout commonly used in Germany and Austria is based on one defined in a former edition (October 1988) of the German standard DIN 2137-2. The current edition DIN 2137:2012-06 standardizes it as the first (basic) one of three layouts, calling it “T1” (Tastaturbelegung 1, or “keyboard layout 1”).

It employs dead keys to type accented characters like “é”, and the AltGr key to access characters in the third level (e.g. “[”, “]”, “@”, the euro sign “€”, or the micro- “µ”). The “T2” layout as specified in the 2012 edition of the German standard also uses the group selection to access special characters like the long s, or foreign characters like “Æ” or “Ə”.

Sorbian QWERTZ is practically identical to the German layout, but the additional Sorbian characters can be entered with dead keys; it has three different layouts: Standard, Legacy, and Extended. All are supported by Microsoft Windows (Windows 7 and later only).[1]

The QWERTZ keyboard layout is commonly used in the Czech Republic, but the QWERTY variant is an unofficial option. The characters from the American keyboard (@#$&\|[]{}<>^`~*) and some other characters and diacritic signs (÷×¤€ßĐđŁł°˘˝·˛¸) that are missing on the Czech mechanical typewriter keyboard can be accessed with the AltGr key. The layout on the picture is supported by Microsoft Windows.

An unusual feature of this Hungarian keyboard layout is the position of the 0 (zero): it’s located to the left of the 1, so that most of the accented characters can be together on the right side of the keyboard.

The official layout is of type QWERTZ, which is therefore the most widely used keyboard layout in the country. QWERTY used to be widespread due to there not being a dedicated Hungarian layout commonly available for older computers, but since this is no longer an issue, virtually everyone uses QWERTZ in everyday computing.

On "ISO" keyboards (as in the two pictures), the í is positioned on the key to the right of the left Shift key. To adapt to 101/102-key keyboards which don’t have that key, the MS Windows QWERTY layout has put the í on the usual key for the 0 (zero) while the 0 has been moved to that key’s AltGr/Option level; On the Mac both layouts (QWERTY and QWERTZ) have this adaptation.[2]

Polish keyboard for typewriters according to PN-87. 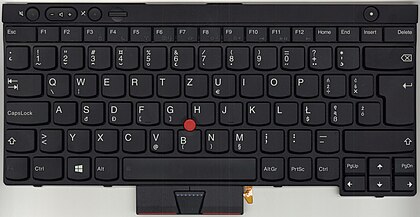 A variant of the QWERTZ keyboard has been used in Poland, but QWERTY keyboards have been dominant since the early 1990s.

The Romanian keyboard in Windows 9x/ME/2000/XP.

The standard keyboard layout as established by the standard SR 13392:2004 is QWERTY. However, a Romanian QWERTZ keyboard (corresponding to older standards) was set up on Windows 9x/2000/ME/XP. Since it was devised before the disunification of "Ș" (S-comma) and "Ț" (T-comma) with "Ş" (S-cedilla; used in Turkic languages) and "Ţ" (T cedilla), the characters with cedilla were used in the layout. In 2012, a revision with commas was made.[3]

Typewriters in Slovakia have used the QWERTZ layout quite similar to the layout used on the Czech typewriters. Slovak QWERTZ layout differs from the Czech one in using the letter ľ instead of the Czech ě on the same position, also the letter ť is on the position of Czech ř and the letter ô is on the position of Czech ů. There are 2 more keys that differ in these 2 languages: Slovak ä ( key replaces the Czech ( ) key and Slovak ň ) key replaces the Czech ' ¨ key. There are 17 characters from American keyboard (@#$&\|[]{}<>^`~*') that are missing on the Slovak keyboard because of the presence of the Slovak letters (ľščňťžôúáíýéä°´ˇ§). Users can access them with the AltGr key, however, position of these characters varies between different operating systems. Besides the QWERTZ keyboard layout inherited from the typewriter era, QWERTY layout is also used by computer users in Slovakia. The only difference is that the Y and Z keys are swapped.

The Bosnian, Croatian, Serbian Latin and Slovene keyboard layout has five additional special characters Č, Ć, Ž, Š and Đ. This keyboard layout was standardized in the 1980s in Yugoslavia. Characters Ć and Đ are only part of Gaj's Latin alphabet but not part of the Slovene alphabet, nevertheless they remain in Slovenian keyboards (for economic reasons, for historical reasons and for writing words in the closely related South Slavic languages). The Ž is on the right side of the Ć key on keyboards which have a longer backspace key, and the usual inverted L shaped Enter key. The layout makes heavy use of the AltGr (right Alt) key for non-alphabetic characters and dead key combinations for adding diacritics to Latin characters. It is possible to type German and Italian using only the Bosnian/Croatian/Serbian keyboard layout.

There is a proposed variant of new Slovene keyboard layout, which would remove Ć and Đ from top layout and add @ instead. The command keys would also become translated into Slovene and some minor second level layout changes would be made.[4]

For Serbian, there is also a Cyrillic keyboard variant.

However, the Apple keyboards for Croatian are QWERTY.[5]

The layout of the Swiss keyboard is established by the national standard SN 074021:1999. It is designed to allow easy access to frequently used accents of the French, German and Italian languages. The difference between the Swiss German (SG) and the Swiss French (SF) layout is that the German variety has the German umlauts (ä, ö, ü) accessible without dead keys, while the French version has the French accented characters (é, à, è) accessible in the unshifted state. The actual keyboards have the keys engraved for both variations; the difference is only in the driver setting. In the latest versions of Windows there are also separately listed driver settings for Swiss Italian and Swiss Romansh, but they correspond to the Swiss French and Swiss German layout, respectively. In Mac OS X 10.6 only Swiss French and Swiss German is available.

On Windows, Swiss German does not include the esszett (ß) ligature, which is only used in Germany and Austria, meaning that that letter is unimportant in Switzerland, and is therefore not found on the keyboard. Linux typically assigns ß to AltGr-s.

While the German keyboard uses German labels for its keys (e.g. Strg instead of Ctrl), Swiss keyboards use the English abbreviations as a "neutral" solution, as they are used for all the national languages of Switzerland.

Luxembourg does not have a keyboard layout of its own. Public education and administration use the Swiss-French keyboard which also represents the Microsoft Windows standard keyboard layout for Luxembourg, while some of the private sector prefer the Belgian layout[citation needed]. Other places use either or the US layout. Liechtenstein, which mostly speaks Swiss German and the Liechtenstein German dialect, also use the Swiss German layout without an ß character.

Retrieved from "http://en.turkcewiki.org/w/index.php?title=QWERTZ&oldid=938326165"
This website is a mirror of Wikipedia, and is not affiliated with the Wikimedia Foundation.
Categories:
Hidden categories: