Jump to navigation Jump to search
High Court for the states of Punjab and Haryana
"Punjab High Court" redirects here. For the high court in Pakistan, see Lahore High Court.

The court building is known as the Palace of Justice. Designed by Le Corbusier, it and several of his other works were inscribed as UNESCO World Heritage Sites in July 2016.[1][2]

Sarv Mittra Sikri, who had been practising in the High Court of Punjab and remained Advocate General, Punjab from 1.11.1956 to 2.2.1964, was the first to be appointed as judge of the Supreme Court of India on 3.2.1964 directly from the Bar, who became Chief Justice of India on 22.1.1971 again with the distinction of being first and only Chief Justice of India directly from the Bar.

Past judges include Madan Mohan Punchhi, P. Sathasivam, Tirath Singh Thakur, Jagdish Singh Khehar and Ranjan Gogoi who were elevated to the Supreme Court of India and became Chief Justice of India.[3][4][5] 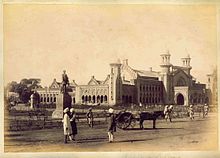 Following the independence of India and its Partition on 15 August 1947, a separate High Court of East Punjab was created by the Governor General's High Courts (Punjab) Order, 1947 issued under Section 9 of the Indian Independence Act, 1947, based at historic Peterhoff building in Shimla for the territories as included in the then Province of East Punjab and the then Province of Delhi. This had jurisdiction over the erstwhile territories of Patiala and East Punjab States Union and the Punjab Province of British India, which covers now areas of Indian Punjab, Delhi, Himachal Pradesh and Haryana. It was at Peterhoff where the trial of Nathuram Godse, who assassinated Mahatma Gandhi, took place in 1948–49.[8]

On introduction of the Constitution of India on January 26, 1950, the State of East Punjab came to be known as the Punjab and accordingly, the name of the High Court was also changed as High Court of Punjab. Simultaneously, Patiala and East Punjab States Union (PEPSU), which was created by uniting eight princely states on 15 July 1948, was also made a Part 'B' State with a separate High Court of Patiala and East Punjab States Union (PEPSU). As per Article 214(2) of the Constitution of India, the High Court was to be continued along with other High Courts.

From 17 January 1955, the Court was moved to its present location in Chandigarh.[9]

Renaming and Reduction of Jurisdiction[edit]

Following area of State of Punjab namely Shimla, Kangra, Kullu and Lahaul and Spiti Districts; Nalagarh tehsil of Ambala District; Lohara, Amb and Una kanungo circles, some area of Santokhgarh kanungo circle and some other specified area of Una tehsil of Hoshiarpur District besides some parts of Dhar Kalan Kanungo circle of Pathankot tehsil of Gurdaspur District; were merged with Himachal Pradesh on 1 November 1966 as per Section 5 of the Punjab Reorganisation Act, 1966 and thus the jurisdiction of the High Court was reduced.

Le Corbusier, a well-known, French architect, was chosen to execute the project of building the high court. India's first Prime Minister, Jawaharlal Nehru, enthusiastically supported the project and took a sustained interest in its execution. When he visited the project on 2 April 1952, he declared "Let this be a new town symbolic of the freedom of India, unfettered by the traditions of the past, an expression of the nation's faith in the future."[citation needed]

Punjab and Haryana high court is high court where entire record of the decision and pending cases have been digitized.[14] Digitized record paved way for many unique applications such as

The figures of the work done are as under:[15]

VPN connection has been provided to honourable judges of high court for accessing DMS for scanned paper books from their camp office or from any other place.[16]

e-diary is a feature whereby account holders can manage their own case portfolio and view the cases filed or represented by them. Online status of the case along with interim and final orders/ judgments were made available through e-diary.[17] All identified cases of different departments such as Income tax department, Insurance company, Union of India, Advocates General of Punjab and Haryana are automatically pushed in their online e-diary accounts. In addition to the e-diary system, the state governments are in develop court cases monitoring system(CCMS) through which they will monitor pending cases in the Supreme court of India.[18]

Online web based e- filing module is functional for filing cases 24 X 7.e- filed cases expedite issuance of copies of orders, summons and is a step towards paperless court regime. It is made compulsory to file cases on online.[19]

In the house, the software has been developed, which contains personal profile and service record of the judicial officer. Access to relevant information has been given at different levels such as Administrative judge, registrar general, registrar vigilance, district judge and the officer concerned.

Decided cases are available on the website of the high court. On many occasions, the final order is reviewed/ modified or challenged by filing into court appeal. Status subsequent to final disposal of the matter is shown and when print out of final order is taken from the website. The printout carries a message showing the up-to-date status of the case.

In a case of cow-smuggling, the Punjab and Haryana High Court while treating animals as the "legal person" mandated that "entire animal kingdom including avian and aquatic" species has a "distinct legal persona with corresponding rights, duties, and liabilities of a living person" and humans are "loco parentis" while laying out the norms for animal welfare, veterinary treatment, fodder and shelter, e.g. animal drawn carriages must not have more than four humans, and load carrying animals must not be loaded beyond the specified limits and those limits must be halved when animals have to carry the load up a slope.[20]

Retrieved from "http://en.turkcewiki.org/w/index.php?title=Punjab_and_Haryana_High_Court&oldid=1089993149"
This website is a mirror of Wikipedia, and is not affiliated with the Wikimedia Foundation.
Categories:
Hidden categories: