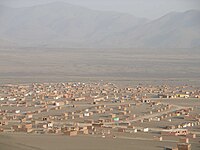 A new pueblo joven in the desert at the northern end of Peru's capital Lima, near Ancón.

listen), "young towns") is the nickname given to the vast shanty towns that surround Lima and other cities of Peru. Many of these towns have developed into significant districts in Lima such as Villa El Salvador and Comas.

They are populated almost exclusively by Black, Amerindian, and mestizo campesinos who since the 1940s have migrated in great waves from Peru's countryside in search of economic opportunity, turning Lima into the fourth-largest city in America. Like many other rapidly industrializing cities, Lima's job market has largely been unable to keep up with this influx of people, forcing many to accept any housing available.[1] Most of the inhabitants of the pueblos jóvenes also came in order to escape terrorism during the 1980s.

The towns are composed of poorly constructed shacks which generally lack running water, and other basic services although electricity is usually available on a pirated DIY basis. In both appearance and culture, they are similar to the favelas of Brazil and other Latin American cities. Crime is rampant.

Water delivery or services to these parts of Lima costs between 6 and ten times as much as it does in affluent parts of Lima such as San Isidro or Miraflores.

Work to improve life in these areas is carried on by organisations such as the NGO Asociacion SOLAC and the theatre group Vichama.

Many of the dwellings are painted with the colors of the American Popular Revolutionary Alliance (APRA), the Socialist Party of Peru, or political candidates. Some still bear the logo of now convicted three-term president Alberto Fujimori, sometimes because the resident hasn't had the time or money to repaint their dwelling, sometimes because they still support Fujimori.

President Alejandro Toledo, Fujimori's successor, pushed through various initiatives to encourage peasants to return to the farming and mining communities whence they came, but they have not been effective.

The Peruvian government has permitted these communities to continue largely because it realizes that, were they to eradicate them, the inhabitants would simply move elsewhere in the city's peripheral areas.[1]

Retrieved from "http://en.turkcewiki.org/w/index.php?title=Pueblos_jóvenes&oldid=931647082"
This website is a mirror of Wikipedia, and is not affiliated with the Wikimedia Foundation.
Categories:
Hidden categories: