Jump to navigation Jump to search
For Wikipedia's policy on the use of primary sources, see WP:PRIMARY.
Not to be confused with Primary sector.
Original source of information created at the time under study 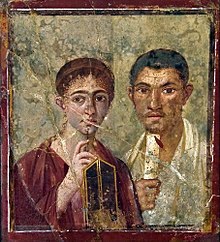 This wall painting found in the Roman city of Pompeii is an example of a primary source about people in Pompeii in Roman times. (Portrait of Paquius Proculo)

In the study of history as an academic discipline, a primary source (also called an original source) is an artifact, document, diary, manuscript, autobiography, recording, or any other source of information that was created at the time under study. It serves as an original source of information about the topic. Similar definitions can be used in library science, and other areas of scholarship, although different fields have somewhat different definitions. In journalism, a primary source can be a person with direct knowledge of a situation, or a document written by such a person.[1]

From a letter of Philip II, King of Spain, 16th century

In scholarly writing, an important objective of classifying sources is to determine their independence and reliability.[5] In contexts such as historical writing, it is almost always advisable to use primary sources and that "if none are available, it is only with great caution that [the author] may proceed to make use of secondary sources."[6] Sreedharan believes that primary sources have the most direct connection to the past and that they "speak for themselves" in ways that cannot be captured through the filter of secondary sources.[7]

In scholarly writing, the objective of classifying sources is to determine the independence and reliability of sources.[5] Though the terms primary source and secondary source originated in historiography[citation needed] as a way to trace the history of historical ideas, they have been applied to many other fields. For example, these ideas may be used to trace the history of scientific theories, literary elements and other information that is passed from one author to another.

A study of cultural history could include fictional sources such as novels or plays. In a broader sense primary sources also include artifacts like photographs, newsreels, coins, paintings or buildings created at the time. Historians may also take archaeological artifacts and oral reports and interviews into consideration. Written sources may be divided into three types.[9]

The Lafayette College Library, provides a synopsis of primary sources in several areas of study:

"The definition of a primary source varies depending upon the academic discipline and the context in which it is used.

Although many primary sources remain in private hands, others are located in archives, libraries, museums, historical societies, and special collections. These can be public or private. Some are affiliated with universities and colleges, while others are government entities. Materials relating to one area might be located in many different institutions. These can be distant from the original source of the document. For example, the Huntington Library in California houses many documents from the United Kingdom.

In other regions, Europeana has digitized materials from across Europe while the World Digital Library and Flickr Commons have items from all over the world. Trove has primary sources from Australia.

History as an academic discipline is based on primary sources, as evaluated by the community of scholars, who report their findings in books, articles and papers. Arthur Marwick says "Primary sources are absolutely fundamental to history."[12] Ideally, a historian will use all available primary sources that were created by the people involved at the time being studied. In practice some sources have been destroyed, while others are not available for research. Perhaps the only eyewitness reports of an event may be memoirs, autobiographies, or oral interviews taken years later. Sometimes the only evidence relating to an event or person in the distant past was written or copied decades or centuries later. Manuscripts that are sources for classical texts can be copies of documents, or fragments of copies of documents. This is a common problem in classical studies, where sometimes only a summary of a book or letter has survived. Potential difficulties with primary sources have the result that history is usually taught in schools using secondary sources.

Historians studying the modern period with the intention of publishing an academic article prefer to go back to available primary sources and to seek new (in other words, forgotten or lost) ones. Primary sources, whether accurate or not, offer new input into historical questions and most modern history revolves around heavy use of archives and special collections for the purpose of finding useful primary sources. A work on history is not likely to be taken seriously as scholarship if it only cites secondary sources, as it does not indicate that original research has been done.[4]

However, primary sources – particularly those from before the 20th century – may have hidden challenges. "Primary sources, in fact, are usually fragmentary, ambiguous and very difficult to analyse and interpret."[12] Obsolete meanings of familiar words and social context are among the traps that await the newcomer to historical studies. For this reason, the interpretation of primary texts is typically taught as part of an advanced college or postgraduate history course, although advanced self-study or informal training is also possible.

In many fields and contexts, such as historical writing, it is almost always advisable to use primary sources if possible, and "if none are available, it is only with great caution that [the author] may proceed to make use of secondary sources."[6] In addition, primary sources avoid the problem inherent in secondary sources in which each new author may distort and put a new spin on the findings of prior cited authors.[13]

However, a primary source is not necessarily more of an authority or better than a secondary source. There can be bias and tacit unconscious views which twist historical information.

"Original material may be... prejudiced, or at least not exactly what it claims to be."

The errors may be corrected in secondary sources, which are often subjected to peer review, can be well documented, and are often written by historians working in institutions where methodological accuracy is important to the future of the author's career and reputation. Historians consider the accuracy and objectiveness of the primary sources that they are using and historians subject both primary and secondary sources to a high level of scrutiny. A primary source such as a journal entry (or the online version, a blog), at best, may only reflect one individual's opinion on events, which may or may not be truthful, accurate, or complete.

Participants and eyewitnesses may misunderstand events or distort their reports, deliberately or not, to enhance their own image or importance. Such effects can increase over time, as people create a narrative that may not be accurate.[15] For any source, primary or secondary, it is important for the researcher to evaluate the amount and direction of bias.[16] As an example, a government report may be an accurate and unbiased description of events, but it may be censored or altered for propaganda or cover-up purposes. The facts can be distorted to present the opposing sides in a negative light. Barristers are taught that evidence in a court case may be truthful but may still be distorted to support or oppose the position of one of the parties.

Many sources can be considered either primary or secondary, depending on the context in which they are examined.[5] Moreover, the distinction between primary and secondary sources is subjective and contextual,[17] so that precise definitions are difficult to make.[18] A book review, when it contains the opinion of the reviewer about the book rather than a summary of the book, becomes a primary source.[19][20]

If a historical text discusses old documents to derive a new historical conclusion, it is considered to be a primary source for the new conclusion. Examples in which a source can be both primary and secondary include an obituary[21] or a survey of several volumes of a journal counting the frequency of articles on a certain topic.[21]

Whether a source is regarded as primary or secondary in a given context may change, depending upon the present state of knowledge within the field.[22] For example, if a document refers to the contents of a previous but undiscovered letter, that document may be considered "primary", since it is the closest known thing to an original source; but if the letter is later found, it may then be considered "secondary"[23]

In some instances, the reason for identifying a text as the "primary source" may devolve from the fact that no copy of the original source material exists, or that it is the oldest extant source for the information cited.[24]

Historians must occasionally contend with forged documents that purport to be primary sources. These forgeries have usually been constructed with a fraudulent purpose, such as promulgating legal rights, supporting false pedigrees, or promoting particular interpretations of historic events. The investigation of documents to determine their authenticity is called diplomatics.

For centuries, Popes used the forged Donation of Constantine to bolster the Papacy's secular power. Among the earliest forgeries are false Anglo-Saxon charters, a number of 11th- and 12th-century forgeries produced by monasteries and abbeys to support a claim to land where the original document had been lost or never existed. One particularly unusual forgery of a primary source was perpetrated by Sir Edward Dering, who placed false monumental brasses in a parish church.[25] In 1986, Hugh Trevor-Roper authenticated the Hitler Diaries, which were later proved to be forgeries. Recently, forged documents have been placed within the UK National Archives in the hope of establishing a false provenance.[26][27] However, historians dealing with recent centuries rarely encounter forgeries of any importance.[4]:22–25

Essays and descriptions of primary, secondary and other sources

Retrieved from "http://en.turkcewiki.org/w/index.php?title=Primary_source&oldid=978089139"
This website is a mirror of Wikipedia, and is not affiliated with the Wikimedia Foundation.
Categories:
Hidden categories: