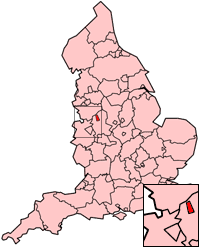 Location of Stoke-on-Trent on a map of England, Potteries dialect is mostly concentrated in this area of the country.

Potteries is an English dialect of the West Midlands of England, almost exclusively in and around Stoke-on-Trent, Staffordshire.

As with most local dialects in English, Potteries dialect derives originally from Anglo Saxon Old English. The 14th-century Anglo Saxon poem Sir Gawain and the Green Knight, which appears in the Cotton Nero A.x manuscript uses dialect words native to the Potteries, leading some scholars to believe that it was written by a monk from Dieulacres Abbey.[1] However, the most commonly suggested candidate for authorship is John Massey of Cotton, Cheshire[2] (now part of Cranage outside Holmes Chapel).[3] The same manuscript also contains three religious alliterative poems, Cleanness, Patience and Pearl,[4] which are attributed to the same unknown author.[5][6] Although the identity of the author is still disputed, J. R. R. Tolkien and E. V. Gordon writing in 1925 concluded that "his home was in the West Midlands of England; so much his language shows, and his metre, and his scenery."[7]

The first documented instance of Potteries dialect is by the prominent Staffordshire lawyer John Ward (1781–1870) and local historian Simeon Shaw[8] in their book The Borough of Stoke-upon-Trent published in 1843, in which Ward recorded phonetically a conversation which he overheard in Burslem marketplace in 1810. In the passage, entitled A Burslem Dialogue, Ward provided an explanation of some of the words unique to the district: ‘mewds’ (moulds), ‘kale’ (being called upon in order, first, second….), ‘heo’ (she), ‘shippon’ (a cow-house).[9]

From the 1750s onwards the Industrial Revolution created a high concentration of workforce in the ceramic[10] and coal mining industries, working in close proximity in Stoke-on-Trent. This allowed the dialect to develop as a way of speech specific to those industries.[9]

Some observers of Potteries dialect in the 21st century fear it is dying out as a living speech, as fewer young people use it in everyday conversation. Steve Birks cites increased ease of travel, the decline of the pottery industry leading to people moving out of the area to find work, the prevalence of and exposure to Received Pronunciation through television and radio, and the uniformity of the British education system as contributing factors in the decline of the dialect.[9] Alan Povey has predicted that his will be the last generation that speaks Potteries dialect, and that after his generation is gone the dialect will die out for good.[11] However Birks points out that there have been attempts to eradicate the dialect since the 19th century which were unsuccessful. John Ward writing in 1843 noted that the Potteries dialect was "now almost banished by the schoolmasters assiduous care". Birks also writes that dialect is still used widely amongst local residents, and is toned down when speaking to visitors to the city to be intelligible to them, which shows the dialect is still present in everyday conversation. He also states that there is "a growing interest in preserving, reading about and speaking dialects."[9]

The linguist Graham Pointon, a native of the Potteries, has noted the following phonological differences between RP and the modern Potteries accent.[12]

The traditional dialect also preserves older second person singular forms for modal verbs, such as /kɒst/ for can you?[14]

Like all English dialects, the Potteries dialect derives from Anglo-Saxon Old English. Example words and phrases:

A popular cartoon called May un Mar Lady, created by Dave Follows, appears in The Sentinel newspaper and is written in the Potteries dialect. A local weekly paper, the 'Cheadle & Tean Times', also carries a short column by 'Sosh' remarking on local happenings as a monologue in Staffordshire dialect. Previously The Sentinel has carried other stories in the dialect, most notably the Jabez stories written by Wilfred Bloor under the pseudonym of A Scott[15] Alan Povey's Owd Grandad Piggott stories which have aired on BBC Radio Stoke for a number of years are recited in the Potteries dialect by the author.[16]

The Potteries accent is much more difficult to imitate than the better known Cockney, Scouse, Brummie or Geordie; and few actors from outside the Potteries have managed to master it. Neither in the 1952 film "The Card" nor in the 1976 TV series "Clayhanger", did any actor give a reasonable rendition of the accent. Ken Loach's 1971 film The Rank and File was set in the Potteries and attempted to use the local dialect, but many of the actors were recruited from the film The Big Flame which was set in Liverpool and used Scouse.

Retrieved from "http://en.turkcewiki.org/w/index.php?title=Potteries_dialect&oldid=935096303"
This website is a mirror of Wikipedia, and is not affiliated with the Wikimedia Foundation.
Categories:
Hidden categories: