Postal savings systems provide depositors who do not have access to banks a safe and convenient method to save money. Many nations have operated banking systems involving post offices to promote saving money among the poor. 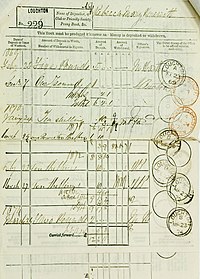 This 1869 deposit book would be carried by the customer, and is a typical record of a British Post Office Savings Bank savings account.

In 1861, Great Britain became the first nation to offer such an arrangement. It was supported by Sir Rowland Hill, who successfully advocated the penny post, and William Ewart Gladstone, then Chancellor of the Exchequer, who saw it as a cheap way to finance the public debt. At the time, banks were mainly in the cities and largely catered to wealthy customers. Rural citizens and the poor had no choice but to keep their funds at home or on their persons.

The original Post Office Savings Bank was limited to deposits of £30 per year with a maximum balance of £150. Interest was paid at the rate of 2.5 percent per annum on whole pounds in the account. Later, the limits were raised to a maximum of £500 per year in deposits with no limit on the total amount. Within five years of the system's establishment, there were over 600,000 accounts and £8.2 million on deposit. By 1927, there were twelve million accounts—one in four Britons—with £283 million (£16,593 million today) on deposit.[1]

Many other countries adopted such systems soon afterwards. Japan established a postal savings system in 1875 and the Netherlands government started a systems in 1881 under the name Rijkspostspaarbank (national postal savings bank), this was followed by many other countries over the next 50 years. The later part of the 20th century saw a reversal where these systems were abolished or privatized. 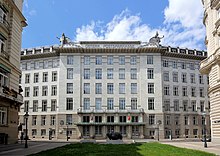 Brazil instituted a postal banking system in 2002, where the national postal service (ECT) formed a partnership with the largest private bank in the country (Bradesco) to provide financial services at post offices. The current partnership is with Bank of Brazil. 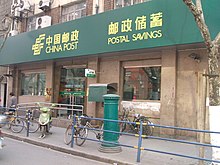 In the People's Republic of China, the Postal Savings Bank of China (zh:中国邮政储蓄银行) was split from China Post in 2007 and established as a state-owned limited company. It continues to provide banking services at post offices and, at the same time, some separated branches.

In Finland, Postisäästöpankki ("Post Savings Bank") was founded in 1887. In 1970 its name was shortened to Postipankki ("Post Bank"). In 1998 it was changed to a commercial bank named Leonia Bank. Later, it was merged with an insurance company to form Sampo Group, and the bank was renamed Sampo Bank. It had a few own offices, but also post offices performed its banking operations until 2000. In 2007, Sampo Bank was sold to the Danish Danske Bank.

Greek Postal Savings Bank provided banking services from post offices until 2013 when it was replaced by New TT Hellenic Postbank a subsidiary of Eurobank Group.

Postal savings in Indonesia began with the establishment of the Netherlands Indian Post Office Savings Bank (Dutch: Postspaarbank) in 1897. During the Japanese occupation of Indonesia, it was replaced by the Savings Office (Japanese: 貯金局, Hepburn: Chokin-kyoku, Nihon-shiki: Tyokin-kyoku) and savings were encouraged by the military administration to support the Greater East Asia War. The Savings Office became the Post Office Savings Bank again (Indonesian: Bank Tabungan Pos) after independence, before renamed into the current State Savings Bank, or Bank Tabungan Negara (BTN) in 1963. Between 1963 and 1968, it became the Fifth Unit of Bank Negara Indonesia during the single-bank system, made to support the guided democracy.

Currently, BTN offers a savings plan that allows its users to deposit in post offices.

In Ireland, An Post ran Postbank between 2006 and its closure in 2010, that was a joint venture with Fortis Bank Belgium.

Japan Post Bank, part of the post office was the world's largest savings bank with 198 trillion yen (US$1.7 trillion) of deposits as of 2006,[8] much from conservative, risk-averse citizens. The government was criticized for using these funds to engage in uneconomical infrastructure projects—what in America would be called pork barrel spending. The state-owned Japan Post Bank business unit of Japan Post was formed in 2007, as part of a ten-year privatization programme, intended to achieve fully private ownership of the postal system by 2017.[9]

In 1881 the Dutch government founded the Rijkspostspaarbank (National Postal Savings Bank). In 1986 it was privatised, together with the Postgiro service, as the Postbank N.V. Postbank merged with a commercial bank that would eventually become ING Bank.

Postbanken was founded in 1948 after major political battle as Norges Postsparebank, however the maximum amount allowed to be saved per person was set to NOK 10,000. In 1948 the bank had services provided at 3,600 post offices and post outlets. It was sold in 1999 and became part of the commercial bank DNB ASA.

In Portugal, the CTT own 100% of the Banco CTT, which has been operating since 2015 throughout Portugal.

In Taiwan, the Chunghwa Post provides savings accounts and Visa debit card services in the Free Area of the Republic of China.

Between 1 April 1929 to 31 March 1947, the Post and Telegraph Department of the Ministry of Commerce and Transportation of Thailand has run Saving Office before becoming Government Savings Bank (GSB)[15]

Lien Viet Post Joint Stock Commercial Bank or LienVietPostBank (LPB), formerly known as LienVietBank, is a Vietnamese retail bank that provides banking products and services through its own transaction points across 42 cities and provinces and 1,031 postal transaction offices nationwide. LienVietPostBank is considered to be in the top 10 biggest banks in terms of assets and equity [2] and ranked 36th in VNR500 -Top 500 largest private companies in Vietnam in 2013. The Bank is striving to become the bank for everyone in Vietnam by focusing on banking products for households and small and medium enterprises especially in the agriculture sector, and expanding its activities to rural and remote areas via the post.

The Post Office Ltd offers savings accounts based on its brand, and is operated by the Bank of Ireland, a commercial bank, and Family Investments, a friendly society.

The Post Office branded services are similar to some of National Savings and Investments' services, and include instant savings, Individual Savings Accounts, seasonal savings and savings bonds.[16][17][18][19] Post Office Ltd also provides a Post Office card account that accepts only direct deposits of certain state pension and welfare payments, permitting cash withdrawals over the counter.[20] This last account is offered in partnership with the Department for Work and Pensions until 2010, through investment banking and asset management company JP Morgan. (This contract has recently been awarded to JP Morgan to run till 2015)

Retrieved from "http://en.turkcewiki.org/w/index.php?title=Postal_savings_system&oldid=932828683"
This website is a mirror of Wikipedia, and is not affiliated with the Wikimedia Foundation.
Categories:
Hidden categories: