(Redirected from Poset)
Jump to navigation Jump to search 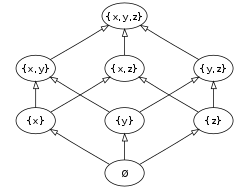 The Hasse diagram of the set of all subsets of a three-element set {x, y, z}, ordered by inclusion. Distinct sets on the same horizontal level are incomparable with each other. Some other pairs, such as {x} and {y,z}, are also incomparable.

In mathematics, especially order theory, a partially ordered set (also poset) formalizes and generalizes the intuitive concept of an ordering, sequencing, or arrangement of the elements of a set. A poset consists of a set together with a binary relation indicating that, for certain pairs of elements in the set, one of the elements precedes the other in the ordering. The relation itself is called a "partial order." The word partial in the names "partial order" and "partially ordered set" is used as an indication that not every pair of elements needs to be comparable. That is, there may be pairs of elements for which neither element precedes the other in the poset. Partial orders thus generalize total orders, in which every pair is comparable.

Formally, a partial order is any binary relation that is reflexive (each element is comparable to itself), antisymmetric (no two different elements precede each other), and transitive (the start of a chain of precedence relations must precede the end of the chain).

One familiar example of a partially ordered set is a collection of people ordered by genealogical descendancy. Some pairs of people bear the descendant-ancestor relationship, but other pairs of people are incomparable, with neither being a descendant of the other.

A poset can be visualized through its Hasse diagram, which depicts the ordering relation.[1]

A (non-strict) partial order[2] is a binary relation ≤ over a set P satisfying particular axioms which are discussed below. When a ≤ b, we say that a is related to b. (This does not imply that b is also related to a, because the relation need not be symmetric.)

The axioms for a non-strict partial order state that the relation ≤ is reflexive, antisymmetric, and transitive. That is, for all a, b, and c in P, it must satisfy:

In other words, a partial order is an antisymmetric preorder.

A set with a partial order is called a partially ordered set (also called a poset). The term ordered set is sometimes also used, as long as it is clear from the context that no other kind of order is meant. In particular, totally ordered sets can also be referred to as "ordered sets", especially in areas where these structures are more common than posets.

For a, b, elements of a partially ordered set P, if a ≤ b or b ≤ a, then a and b are comparable. Otherwise they are incomparable. In the figure on top-right, e.g. {x} and {x,y,z} are comparable, while {x} and {y} are not. A partial order under which every pair of elements is comparable is called a total order or linear order; a totally ordered set is also called a chain (e.g., the natural numbers with their standard order). A subset of a poset in which no two distinct elements are comparable is called an antichain (e.g. the set of singletons {{x}, {y}, {z}} in the top-right figure). An element a is said to be strictly less than an element b, if a ≤ b and a≠b. An element a is said to be covered by another element b, written a⋖b (or a<:b), if a is strictly less than b and no third element c fits between them; formally: if both a≤b and a≠b are true, and a≤c≤b is false for each c with a≠c≠b. A more concise definition will be given below using the strict order corresponding to "≤". For example, {x} is covered by {x,z} in the top-right figure, but not by {x,y,z}.

Standard examples of posets arising in mathematics include:

There are several notions of "greatest" and "least" element in a poset P, notably:

For example, consider the positive integers, ordered by divisibility: 1 is a least element, as it divides all other elements; on the other hand this poset does not have a greatest element (although if one would include 0 in the poset, which is a multiple of any integer, that would be a greatest element; see figure). This partially ordered set does not even have any maximal elements, since any g divides for instance 2g, which is distinct from it, so g is not maximal. If the number 1 is excluded, while keeping divisibility as ordering on the elements greater than 1, then the resulting poset does not have a least element, but any prime number is a minimal element for it. In this poset, 60 is an upper bound (though not a least upper bound) of the subset {2,3,5,10}, which does not have any lower bound (since 1 is not in the poset); on the other hand 2 is a lower bound of the subset of powers of 2, which does not have any upper bound.

Orders on the Cartesian product of partially ordered sets[edit]

In order of increasing strength, i.e., decreasing sets of pairs, three of the possible partial orders on the Cartesian product of two partially ordered sets are (see figures):

All three can similarly be defined for the Cartesian product of more than two sets. 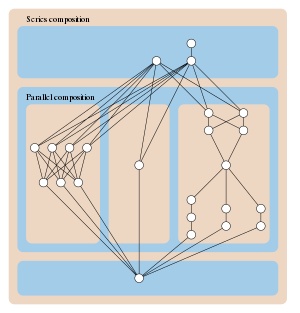 Another way to combine two posets is the ordinal sum[4] (or linear sum[5]), Z = X ⊕ Y, defined on the union of the underlying sets X and Y by the order a ≤Z b if and only if:

If two posets are well-ordered, then so is their ordinal sum.[6] The ordinal sum operation is one of two operations used to form series-parallel partial orders, and in this context is called series composition. The other operation used to form these orders, the disjoint union of two partially ordered sets (with no order relation between elements of one set and elements of the other set) is called in this context parallel composition.

This is the reason for using the notation "≤".

Any one of the four relations ≤, <, ≥, and > on a given set uniquely determines the other three.

In general two elements x and y of a partial order may stand in any of four mutually exclusive relationships to each other: either x < y, or x = y, or x > y, or x and y are incomparable (none of the other three). A totally ordered set is one that rules out this fourth possibility: all pairs of elements are comparable and we then say that trichotomy holds. The natural numbers, the integers, the rationals, and the reals are all totally ordered by their algebraic (signed) magnitude whereas the complex numbers are not. This is not to say that the complex numbers cannot be totally ordered; we could for example order them lexicographically via x+iy < u+iv if and only if x < u or (x = u and y < v), but this is not ordering by magnitude in any reasonable sense as it makes 1 greater than 100i. Ordering them by absolute magnitude yields a preorder in which all pairs are comparable, but this is not a partial order since 1 and i have the same absolute magnitude but are not equal, violating antisymmetry.

Given two partially ordered sets (S,≤) and (T,≤), a function f: S → T is called order-preserving, or monotone, or isotone, if for all x and y in S, x≤y implies f(x) ≤ f(y). If (U,≤) is also a partially ordered set, and both f: S → T and g: T → U are order-preserving, their composition (g∘f): S → U is order-preserving, too. A function f: S → T is called order-reflecting if for all x and y in S, f(x) ≤ f(y) implies x≤y. If f is both order-preserving and order-reflecting, then it is called an order-embedding of (S,≤) into (T,≤). In the latter case, f is necessarily injective, since f(x) = f(y) implies x ≤ y and y ≤ x. If an order-embedding between two posets S and T exists, one says that S can be embedded into T. If an order-embedding f: S → T is bijective, it is called an order isomorphism, and the partial orders (S,≤) and (T,≤) are said to be isomorphic. Isomorphic orders have structurally similar Hasse diagrams (cf. right picture). It can be shown that if order-preserving maps f: S → T and g: T → S exist such that g∘f and f∘g yields the identity function on S and T, respectively, then S and T are order-isomorphic. [8]

For example, a mapping f: ℕ → ℙ(ℕ) from the set of natural numbers (ordered by divisibility) to the power set of natural numbers (ordered by set inclusion) can be defined by taking each number to the set of its prime divisors. It is order-preserving: if x divides y, then each prime divisor of x is also a prime divisor of y. However, it is neither injective (since it maps both 12 and 6 to {2,3}) nor order-reflecting (since 12 doesn't divide 6). Taking instead each number to the set of its prime power divisors defines a map g: ℕ → ℙ(ℕ) that is order-preserving, order-reflecting, and hence an order-embedding. It is not an order-isomorphism (since it e.g. doesn't map any number to the set {4}), but it can be made one by restricting its codomain to g(ℕ). The right picture shows a subset of ℕ and its isomorphic image under g. The construction of such an order-isomorphism into a power set can be generalized to a wide class of partial orders, called distributive lattices, see "Birkhoff's representation theorem".

Sequence A001035 in OEIS gives the number of partial orders on a set of n labeled elements:

Every poset (and every preordered set) may be considered as a category where, for objects x and y, there is at most one morphism from x to y. More explicitly, let hom(x, y) = {(x, y)} if x ≤ y (and otherwise the empty set) and (y, z)∘(x, y) = (x, z). Such categories are sometimes called posetal.

If P is a partially ordered set that has also been given the structure of a topological space, then it is customary to assume that {(a, b) : a ≤ b} is a closed subset of the topological product space

. Under this assumption partial order relations are well behaved at limits in the sense that if

An interval in a poset P is a subset I of P with the property that, for any x and y in I and any z in P, if x ≤ z ≤ y, then z is also in I. (This definition generalizes the interval definition for real numbers.)

The half-open intervals [a, b) and (a, b] are defined similarly.

Sometimes the definitions are extended to allow a > b, in which case the interval is empty.

An interval I is bounded if there exist elements a and b of P such that I ⊆ [a, b]. Every interval that can be represented in interval notation is obviously bounded, but the converse is not true. For example, let P = (0, 1) ∪ (1, 2) ∪ (2, 3) as a subposet of the real numbers. The subset (1, 2) is a bounded interval, but it has no infimum or supremum in P, so it cannot be written in interval notation using elements of P.

This concept of an interval in a partial order should not be confused with the particular class of partial orders known as the interval orders.

Retrieved from "http://en.turkcewiki.org/w/index.php?title=Partially_ordered_set&oldid=944922737"
This website is a mirror of Wikipedia, and is not affiliated with the Wikimedia Foundation.
Categories: