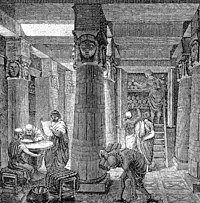 History (from Ancient Greek: ἱστορία, romanized: historíā, lit. 'inquiry; knowledge acquired by investigation') is the study and the documentation of the past. Events before the invention of writing systems are considered prehistory. "History" is an umbrella term comprising past events as well as the memory, discovery, collection, organization, presentation, and interpretation of these events. Historians seek knowledge of the past using historical sources such as written documents, oral accounts, art and material artifacts, and ecological markers.

History is also an academic discipline which uses narrative to describe, examine, question, and analyze past events, and investigate their patterns of cause and effect. Historians often debate which narrative best explains an event, as well as the significance of different causes and effects. Historians also debate the nature of history as an end in itself, as well as its usefulness to give perspective on the problems of the present.

Stories common to a particular culture, but not supported by external sources (such as the tales surrounding King Arthur), are usually classified as cultural heritage or legends. History differs from myth in that it is supported by verifiable evidence. However, ancient cultural influences have helped spawn variant interpretations of the nature of history which have evolved over the centuries and continue to change today. The modern study of history is wide-ranging, and includes the study of specific regions and the study of certain topical or thematic elements of historical investigation. History is often taught as a part of primary and secondary education, and the academic study of history is a major discipline in university studies.

Herodotus, a 5th-century BC Greek historian, is often considered the "father of history" in the Western tradition, although he has also been criticized as the "father of lies". Along with his contemporary Thucydides, he helped form the foundations for the modern study of past events and societies. Their works continue to be read today, and the gap between the culture-focused Herodotus and the military-focused Thucydides remains a point of contention or approach in modern historical writing. In East Asia, a state chronicle, the Spring and Autumn Annals, was reputed to date from as early as 722 BC, although only 2nd-century BC texts have survived. (Full article...)

Outline of history · Index
Refresh with new selections below (purge)

Did you know (auto generated)

This is a Featured article, which represents some of the best content on English Wikipedia.

Sulayman ibn Abd al-Malik (Arabic: سليمان بن عبد الملك, romanized: Sulaymān ibn ʿAbd al-Malik, c. 675 – 24 September 717) was the seventh Umayyad caliph, ruling from 24 February 715 until his death. He began his career as governor of Palestine, while his father Abd al-Malik (r. 685–705) and brother al-Walid I (r. 705–715) reigned as caliphs. There, the theologian Raja ibn Haywa al-Kindi mentored him, and he forged close ties with Yazid ibn al-Muhallab, a major opponent of al-Hajjaj ibn Yusuf, al-Walid's powerful viceroy of Iraq and the eastern Caliphate. Sulayman resented al-Hajjaj's influence over his brother. As governor, Sulayman founded the city of Ramla and built the White Mosque in it. The new city superseded Lydda as the administrative capital of Palestine. Lydda was at least partly destroyed and its inhabitants may have been forcibly relocated to Ramla. Ramla developed into an economic hub, became home to many Muslim scholars, and remained the administrative capital of Palestine until the 11th century.

After succeeding al-Walid, Sulayman dismissed his predecessor's governors and generals. Many had been handpicked by al-Hajjaj and had led the war efforts which brought the Caliphate to its greatest territorial extent. Among al-Hajjaj's loyalists were the conqueror of Transoxiana (Central Asia), Qutayba ibn Muslim, who was killed by his own troops in an abortive revolt in anticipation of his dismissal, and the conqueror of Sind (the western Indian subcontinent), Muhammad ibn al-Qasim, who was executed. In the west, Sulayman deposed Musa ibn Nusayr, the conqueror of the Iberian Peninsula (al-Andalus) and governor of Ifriqiya (central North Africa), and had his son Abd al-Aziz, governor of al-Andalus, assassinated. Although he continued his predecessors' militarist policies, expansion largely stopped under Sulayman, partly due to effective resistance along the Central Asian frontiers and the collapse of Arab military leadership and organization there after Qutayba's death. Sulayman's appointee over the eastern Caliphate, his confidant Yazid, invaded the southern Caspian coast in 716, but withdrew and settled for a tributary arrangement after being defeated by the local Iranian rulers. Sulayman intensified the war with the Byzantine Empire, culminating in the 717–718 siege of Constantinople, which ended in an Arab defeat. (Full article...)
edit

What transforms this world is — knowledge. Do you see what I mean? Nothing else can change anything in this world.

More Did you know...

Discover Wikipedia using portals
Retrieved from "http://en.turkcewiki.org/w/index.php?title=Portal:History&oldid=1054070325"
This website is a mirror of Wikipedia, and is not affiliated with the Wikimedia Foundation.
Categories:
Hidden categories: