A poorhouse or workhouse is a government-run (usually by a county or municipality) facility to support and provide housing for the dependent or needy.

In England, Wales and Ireland (but not in Scotland)[1] a poorhouse was more commonly known as a workhouse. Before the introduction of the Poor Laws, each parish would maintain its own workhouse and often these rural 'poor houses' would be simple farms with the occupants dividing their times between working the farm and employed on maintaining local roads and other parish works. An example of one such is Strand House in East Sussex. In the early Victorian era (see Poor Law), poverty was seen as a dishonorable state. As depicted by Charles Dickens, a workhouse could resemble a reformatory, often housing whole families, or a penal labour regime giving manual work to the indigent and subjecting them to physical punishment.[citation needed] At many poorhouses/workhouses, men and women were split up with no communication between them. 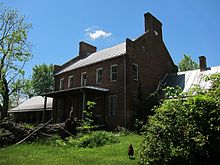 Often the poorhouse was situated on the grounds of a poor farm on which able-bodied residents were required to work. Such farms were common in the United States in the 19th and early 20th centuries. A poorhouse could even be part of the same economic complex as a prison farm and other penal or charitable public institutions. Poor farms were county- or town-run residences where paupers (mainly elderly and disabled people) were supported at public expense. The farms declined in use after the Social Security Act took effect in 1935, with most disappearing completely by about 1950.

Most were working farms that produced at least some of the produce, grain, and livestock they consumed. Residents were expected to provide labor to the extent that their health would allow, both in the fields, in providing housekeeping and care for other residents. Rules were strict and accommodations minimal.

Poor farms were the origin of the U.S. tradition of county governments (rather than cities, townships, or state or federal governments) providing social services for the needy within their borders. The federal government did not participate in social welfare for over 70 years following the 1854 veto of the Bill for the Benefit of the Indigent Insane by Franklin Pierce. This tradition has continued and is, in most cases, codified in state law. The financial costs of such care has been shifted in part to state and federal governments.

The poorhouse, with attached farm concept, was favored in Canada. According to a 2009 report by the Toronto Star, "pauperism was considered a moral failing that could be erased through order and hard work".[2] The oldest government-supported facility of this type that is still standing, (now a museum), is located in Southern Ontario between Fergus, Ontario and Elora, Ontario. The Wellington County House of Industry and Refuge was opened in 1877 and over the years, housed approximately 1500 deserving poor, including those who were destitute, old and infirm, or disabled. The 60-bed house for inmates was surrounded by a 30-acre industrial farm with a barn for livestock that produced some of the food for the 70 residents and the staff and also provided work for them.[3] Others worked in the House itself. A hospital was added in 1892. The nearby cemetery has 271 plots.[4] In 1947, the House was converted into a home for the aged and in 1975 the building reopened as the Wellington County Museum and Archives, one of the National Historic Sites of Canada.[5]

Retrieved from "http://en.turkcewiki.org/w/index.php?title=Poorhouse&oldid=955702796"
This website is a mirror of Wikipedia, and is not affiliated with the Wikimedia Foundation.
Categories:
Hidden categories: