Jump to navigation Jump to search
Not to be confused with Economic policy.
Study of production, buying, and selling, and their relations with law, custom, and government 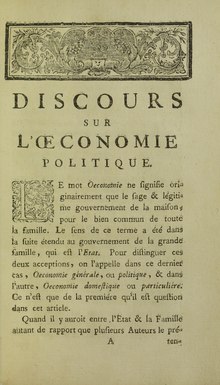 Political economy[1][2] is the study of production and trade and their relations with law, custom and government; and with the distribution of national income and wealth. As a discipline, political economy originated in moral philosophy, in the 18th century, to explore the administration of states' wealth, with "political" signifying the Greek word polity and "economy" signifying the Greek word οἰκονομία (household management). The earliest works of political economy are usually attributed to the British scholars Adam Smith, Thomas Malthus, and David Ricardo, although they were preceded by the work of the French physiocrats, such as François Quesnay (1694–1774) and Anne-Robert-Jacques Turgot (1727–1781).[3]

Political economy, where it isn't considered a synonym for economics, may refer to very different things. From an academic standpoint, the term may reference Marxian economics, applied public choice approaches emanating from the Chicago school and the Virginia school. In common parlance, "political economy" may simply refer to the advice given by economists to the government or public on general economic policy or on specific economic proposals developed by political scientists.[6] A rapidly growing mainstream literature from the 1970s has expanded beyond the model of economic policy in which planners maximize utility of a representative individual toward examining how political forces affect the choice of economic policies, especially as to distributional conflicts and political institutions.[8] It is available as a stand-alone area of study in certain colleges and universities.

Most institutions of higher education offer the political economy as an area of specialization, either under economics or political science. Notable institutions includes the University of Warwick, London School of Economics, Graduate Institute Geneva, Paul H. Nitze School of Advanced International Studies, and Balsillie School of International Affairs, among others.

Originally, political economy meant the study of the conditions under which production or consumption within limited parameters was organized in nation-states. In that way, political economy expanded the emphasis of economics, which comes from the Greek oikos (meaning "home") and nomos (meaning "law" or "order"). Political economy was thus meant to express the laws of production of wealth at the state level, quite like economics concerns putting home to order. The phrase économie politique (translated in English to "political economy") first appeared in France in 1615 with the well-known book by Antoine de Montchrétien, Traité de l’economie politique. Other contemporary scholars attribute the roots of this study to the 13th Century Tunisian Arab Historian and Sociologist, Ibn Khaldun, for his work on making the distinction between "profit" and "sustenance", in modern political economy terms, surplus and that required for the reproduction of classes respectively. He also calls for the creation of a science to explain society and goes on to outline these ideas in his major work, the Muqaddimah. In Al-Muqaddimah Khaldun states, “Civilization and its well-being, as well as business prosperity, depend on productivity and people’s efforts in all directions in their own interest and profit” – seen as a modern precursor to Classical Economic thought.

Leading on from this, the French physiocrats were the first major exponents of political economy,[9] although the intellectual responses of Adam Smith, John Stuart Mill, David Ricardo, Henry George and Karl Marx to the physiocrats generally receives much greater attention.[10] The world's first professorship in political economy was established in 1754 at the University of Naples Federico II in southern Italy. The Neapolitan philosopher Antonio Genovesi was the first tenured professor. In 1763, Joseph von Sonnenfels was appointed a Political Economy chair at the University of Vienna, Austria. Thomas Malthus, in 1805, became England's first professor of political economy, at the East India Company College, Haileybury, Hertfordshire. At present, political economy refers to different yet related approaches to studying economic and related behaviours, ranging from the combination of economics with other fields to the use of different, fundamental assumptions challenging earlier economic assumptions: 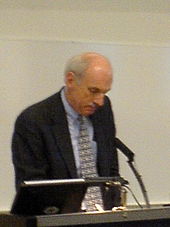 Public choice theory is a microfoundations theory closely intertwined with political economy. Both approaches model voters, politicians and bureaucrats as behaving in mainly self-interested ways, in contrast to a view, ascribed to earlier mainstream economists, of government officials trying to maximize individual utilities from some kind of social welfare function.[15] As such, economists and political scientists often associate political economy with approaches using rational-choice assumptions,[16] especially in game theory[17] and in examining phenomena beyond economics' standard remit, such as government failure and complex decision making in which context the term "positive political economy" is common.[18] Other "traditional" topics include analysis of such public policy issues as economic regulation,[19] monopoly, rent-seeking, market protection,[20] institutional corruption[21] and distributional politics.[22] Empirical analysis includes the influence of elections on the choice of economic policy, determinants and forecasting models of electoral outcomes, the political business cycles,[23] central-bank independence and the politics of excessive deficits.[24] 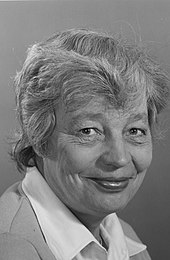 Other important landmarks in the development of political economy include:

Because political economy is not a unified discipline, there are studies using the term that overlap in subject matter, but have radically different perspectives:[51]

Retrieved from "http://en.turkcewiki.org/w/index.php?title=Political_economy&oldid=991265993"
This website is a mirror of Wikipedia, and is not affiliated with the Wikimedia Foundation.
Categories:
Hidden categories: