Jump to navigation Jump to search
District of Uttarakhand in India

Pithoragarh district is the easternmost district in the state of Uttarakhand. It is located in the Himalayas and has an area of 7,110 km2 (2,750 sq mi) and a population of 483,439 (as of 2011). The city of Pithoragarh, located in Saur Valley, is its headquarters. The district is within the Kumaon division of Uttarakhand state. The Tibet plateau is situated to the north and Nepal is to the east. The Kali River which originates from the Kalagiri Mountain flows south, forming the eastern border with Nepal.[1] The Hindu pilgrimage route for Mount Kailash-Lake Manasarovar passes through this district via Lipulekh Pass in the greater Himalayas. The district is administratively divided into six Tehsils: Munsyari; Dharchula; Didihat; Berinag; Gangolihat; and Pithoragarh. Naini Saini Airport is the nearest civil airport, but it does not have a regular scheduled commercial passenger service. The mineral deposits present in the district are magnesium ore, copper ore, limestone, and slate. There are 11 tehsils.

Some attribute the name to King Prithvi Pal (Had his empire to Nainital & parts of UP) / Piru Gusain (Gusain refers to the younger son of a King), here the younger son of King of Askote (Pal)/ Pithora Shahi/ Pithora Chand from the Chand Dynasty, who built a fort named Pithora Garh in the Saur Valley.

After its conquest by Bhartpal, the Rajwar of Uku (now in Nepal), in the year 1364, Pithoragarh was ruled for the rest of the 14th century by three generations of Pals, and the kingdom extended from Pithoragarh to Askot. 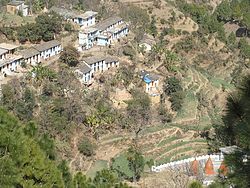 A village of Pithoragarh district

According to a Tamra Patra (inscribed copper or brass plaque) from 1420, the Pal dynasty, based out of Askot, was uprooted by Chand kings. Vijay Brahm (of the Brahm dynasty from Doti) took over the empire as King. Following the death of Gyan Chand, in a conflict with Kshetra Pal, the Pals were able to regain the throne.

It is believed that Bharti Chand, an ancestor of Gyan Chand, had replaced Bams, the ruler of Pithoragarh, after defeating them in 1445. In the 16th century, the Chand dynasty again took control over Pithoragarh town and, in 1790, built a new fort on the hill where the present Girls Inter College is situated. The Chand rule, at its zenith, is seen as one of the most prominent empires in Kumaon. Their rule also coincides with a period of cultural resurgence. Archaeological surveys point toward the development of culture and art forms in this period.

British rule began on 2 December 1815 when Nepal was forced to sign the Sugauli Treaty. Pithoragarh remained a tehsil under Almora district until 1960 when its status was elevated to that of a district. There was an army cantonment, a church, and a mission school, resulting in the spread of Christianity in the region.

In 1997, part of the Pithoragarh district was separated to form the new Champawat district.

Native tribes in the district include the Van Rawats and Shaukas. Van Rawats are hunter-gatherers. Shaukas are traders. In Pithoragarh the Shaukas are divided into two main tribes. Johari Shaukas and Rung Shaukas. The Johari Shauka community inhabits the areas in Munsiyari while Rung Shaukas tribe are spread among the three valleys of Darma, Chaundas, and Byans. Kangdali Festival, celebrated once every 12 years by inhabitants of Chaundas Valley, is one of the major festivals in this area.

Kumaoni, with its several dialects, is the most widely spoken language.[6] Hindi is the common language between the locals and outsiders, and English is spoken by some people, especially teachers, lecturers, and students in tertiary education.

Several Sino-Tibetan languages of the West Himalayish branch are spoken by small communities. These include the three closely related languages of Byangsi, Chaudangsi, and Darmiya, as well as Rangkas & Rawat.[7] The Van Rawat tribe speaks their own variety of Kumaoni.[citation needed]

Pithoragarh town, being in a valley, is relatively warm during summer and cool during winter. During the coldest months of December and January, the tropical and temperate mountain ridges and high locations receive snowfall and have an average temperature of 5.5–8.0 °C (41.9–46.4 °F). Pithoragarh district has extreme variation in temperature due to the wide range of variations in altitude. The temperature rises from mid-March through mid-June. The areas above 3,500 metres (11,500 ft) remain in a permanent snow cover. Regions lying at 3,000–3,500 metres (9,800–11,500 ft) become snowbound for four to six months. At places like the river gorges at Dharchula, Jhulaghat, Ghat and Sera, temperatures reach 40 °C (104 °F). The annual average rainfall in lower reaches is 360 centimetres (140 in).Sati, Vishwambhar Prasad; Kumar, Kamlesh (2004). Uttaranchal: Dilemma of Plenties and Scarcities. ISBN 8170998980. After June the district receives monsoon showers. Winter is a time for transhumance – the seasonal migration of the Bhotiya tribe with their herds of livestock to lower, warmer areas.

Locally, glaciers are known as Gal. Some important glaciers of the district are as follows:

A wide variety of flora exists in the district, including many unique sub-tropical, temperate, and alpine plants. Bryophytes (mosses), pteridophytes (ferns), gymnosperms (conifers), and angiosperms (flowering plants) are present. Rare varieties of orchids are also present in the high-altitude valleys of Milan, Darma, Beyans, and Kuthi. Species present include:

Retrieved from "http://en.turkcewiki.org/w/index.php?title=Pithoragarh_district&oldid=1095521192"
This website is a mirror of Wikipedia, and is not affiliated with the Wikimedia Foundation.
Categories:
Hidden categories: