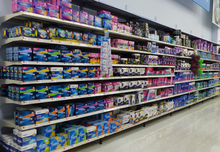 Feminine hygiene products in a store

The pink tax is a phenomenon often attributed as a form of gender-based price discrimination, with the name stemming from the observation that many of the affected products are pink.[1] This is sometimes but not always a literal tax. Regardless of whether tax policies of state or federal governments are involved, there is a broad tendency for products marketed specifically toward women to be more expensive than those marketed for men, despite either gender's choice to purchase either product. The NYC Department of Consumer Affairs conducted a study that concludes that women's products are typically more expensive than men's (in New York city) without reasonable cause. There are many causes of this discrepancy, including the tampon tax, product differentiation, and the belief that women are less price elastic than men.[1][2][3][4]

Products marketed specifically toward women cost on average 7% more than products marketed toward men, according to a New York City Department of Consumer Affairs study.[1] This discrepancy applies to apparel, toys, and healthcare products, among other things. In the toy sector, girls' toys cost on average 7% more than boys' toys.[1] The study talked about a side-by-side comparison of a Radio Flyer scooter where the red scooter costs $24.99 and a pink scooter, identical in all ways but color, costs $49. In children's apparel, girls' clothes were 4% more expensive than boys'.[1] Men's clothing was 8% less expensive than women's clothes. [1] The largest discrepancy came to personal care/hygiene products, where women's products cost 13% more than men's.[1]

There are many reasons why the pink tax exists, including tariffs, product discrimination, and product differentiation. Certain types of clothing, footwear, and gloves made for women and men are taxed at different levels when first entering the United States.[3] While some tariffs are higher for men's clothing, others are higher for women's.

Some people argue that product differentiation can account for a portion of the difference between the prices of men's goods and women's goods. Products like the Radio Flyer scooter may cost more due to the cost of slightly changing the product. For example, a pink scooter may cost more than a red scooter because it is more expensive to paint a scooter pink than red, assuming such a large difference for this reason of production would be because the red scooters are the larger production, and pink scooters are in the minority. They may also be seen as more of a "special edition", like camo-print trampolines.[citation needed] However, there has never been any evidence presented, for example, that pink paint costs more than red paint or blue paint, thereby creating cost differentials in color-coded items geared toward different genders. The Pink Tax also arises in services like haircuts or dry cleaning. Some people argue that women's haircuts are often priced higher than men's because women's haircuts naturally involve more over time and are more labor-intensive than men's; they need to price haircuts for women higher than for men.[citation needed] Likewise, in dry cleaning, some people argue that men's clothing tends to be more uniform while women's clothing tends to have a lot of variabilities which can make it harder to clean. They also argue that pressing machines, normally made for men's clothing, are more difficult to use on women's clothes, which results in the dry-cleaners resorting to hand-pressing the clothing.[5]

The reason those who campaign against the pink tax claim it to be so problematic is alleged higher prices for goods and services marketed to females arising from gender alone, with no underlying economic justification such as higher costs of production in goods. For example, Pink Tax critics say women's and men's razors are essentially the same and distinguishing between them is simply a marketing strategy.[5] While the physical difference between a men's razor and a women's razor is minimal, the difference in marketing those products is large. Marketers have found that women are less price sensitive than men, meaning that they are generally willing to pay higher prices for goods than men.[2] Other examples of marketers acting on price discrimination are student or senior discounts, allowing people who are more sensitive to price to pay less in order to gain their business. Airline ticket prices in advance compared to last-minute prices are another example.[6] People who have a greater need to buy a product are often willing to pay much more, leading to price discrimination.[better source needed] Women are often subjected to this in the tampon and sanitary napkin market. These are products that women absolutely must buy, so they can be priced as high as a marketer would want and they would still sell their entire product.[dubious – discuss] To marketers, women are less price elastic, meaning they care less about the price of a product or service.[4][6]

In the United States, there is no specialized tax on tampons. In states where sales taxes are collected, tampons are taxed in much the same way as most other non-exempt items (such as toilet paper and toothpaste). There has been a recent push to carve out a special tax-exempt status for tampons.[7] As of 2018, 36 states collect sales tax from tampons.[8] Women leading the movement against the tampon tax are calling the tax a form of "regulatory discrimination", saying that menstruation is out of their control and that the government should not tax something that is imminent for approximately half the population.[9] Unlike condoms, tampons are a necessity, with no male equivalent, so the two items cannot be compared. Some schools, colleges, doctors offices, and clinics offer free condoms for use by the public, while the same is not done for menstrual products.[citation needed] Similarly, this puts an even greater strain onto poverty-stricken households and results in a large percentage of women and young girls being unable to afford them. For instance, in a Scotland study, it was discovered that “ 45% of girls“ had used “toilet paper, socks and newspaper to replace menstrual products” because they were unable to afford them. [10]

Australia, Canada, and the United Kingdom have voted on legislation to create special tax exemptions for tampons, but none have become law.[11] India has recently scrapped their tampon tax.[12] Kenya has removed the tampon tax and is now providing menstrual products to school-aged girls.[8]

The economic impact of the pink tax is that women have less purchasing power, especially paired with the gender-based pay gap.[citation needed] The wage gap already puts women at a disadvantage when it comes to purchasing power. Women currently make a statistical average 89 cents for every $1 a man earns in the United States, meaning women statistically, on average, have less income to spend on goods and services.[13] This alone gives men more money and, ultimately, more buying power. The pink tax further contributes to the economic inequality between men and women. Paying more for goods and services marketed to women while women earn less than men means men hold the majority of the purchasing power in the economy.[13] Taxes on feminine hygiene products that men don't need further contributes to this discrepancy.[14]

On July 8, 2016, Speier introduced H.R. 5686, Pink Tax Repeal Act, to the House floor. The overall intention of the Pink Tax Repeal Act is to end gender-based price discrimination. She was the bill's primary sponsor. This was widely considered an early version of the bill.[16]

On April 10, 2018, Speier introduced a revised version of the Pink Tax Repeal Act, H.R.5464. The 115th Congress (2017-2019) was expected to review the 2018 version. Skopos Labs, a technology company that predicts risks and opportunities, gave the bill a 1% chance of being enacted.[16][17] The Pink Tax Repeal Act would mandate that any comparable products that are marketed toward men and women must be priced equally. Although Speier said she did not expect the bill to pass, she tried to push forward the conversation about gender-based price discrimination.

While in the California State Assembly, Speier introduced Assembly Bill No. 1088, also known as the Gender Tax Repeal Act, in 1995. It was similar to the Pink Tax Repeal Act, except it focused on gender-based price discrimination in services. The bill stated that businesses such as tailors, barbers, hair stylists, dry cleaners and laundries would not be permitted to discriminate for "standard services" due to a person's gender or the gender the clothing is intended for, without a valid, prominently placed written justification.[18][19] The bill passed and remains in effect.[needs update] A similar bill was proposed soon after aimed at consumer goods, however it gained large opposition from manufacturing companies.[citation needed] The main opposition argument was that a bill proposed on goods would lead to litigation and price increases.[citation needed]

Democratic California State Sen. Ben Hueso of San Diego proposed a new version of the Gender Tax Repeal Act, SB-899, in 2016, but withdrew the bill after pushback from industry lobbyists.[Like whom?] It would have banned businesses in California from charging customers different prices for similar goods on the basis of gender.[20]

Jennifer Boysko, a Democrat of the Virginia House of Delegates, in 2018 submitted HB 24,[21] which would exempt menstrual supplies from sales and use taxes,[clarification needed] in response to the Tampon Tax in Virginia.[14]

In the UK, women and girls were being charged on average 37 per cent more for toys, cosmetics and clothes than their male counterparts.[22]

Criticism of the pink tax includes the principle that the idea robs women of agency and choice by suggesting that women are so easily brainwashed by marketing that they are prevented from choosing the lesser priced but otherwise "identical" male-marketed alternative. Instead, critics have attributed the pricing disparity to market forces,[23] and stated that if women continue to buy a more expensive pink razor, it is because they see some utility or additional aesthetic that they are willing to pay for. Substantive differences in price indicates differences in the marketability of different products.

Opposition to the Pink Tax Repeal Act came from retailers and manufacturers of women's products and clothing.[20] The main argument is that the Pink Tax Repeal Act would be difficult to enforce and lawsuits would follow. The difference between men's and women's products is not always easy to see, they argue, so removing the pink tax would be subjective.[24] They also alleged that the bill was unfriendly to domestic manufacturing jobs and that lowering the prices for women's products could lead to employee layoffs.[20]

Republican opposition for a recall of the tampon tax in Virginia argued that tax discrimination against products for women needed to be sorted out by changing the general tax code. They added that they supported the elimination of sales taxes overall.[14]

The satirical card game Cards Against Humanity released a "For Her" edition of its base set (which is exactly the same as the original except with pink-colored packaging and a higher price) in 2017 as a satire of the pink tax, and in support of EMILY's List—a U.S. political action committee supporting female pro-choice Democratic candidates.[25]

Retrieved from "http://en.turkcewiki.org/w/index.php?title=Pink_tax&oldid=961205317"
This website is a mirror of Wikipedia, and is not affiliated with the Wikimedia Foundation.
Categories:
Hidden categories: