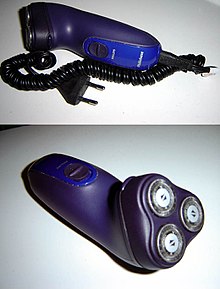 Philishave is the brand name for electric shavers manufactured by the Philips Domestic Appliances and Personal Care unit of Philips from 1939 to 2006 (in the U.S., the Norelco name is used instead). In recent years, Philips had extended the Philishave brand to include hair clippers, beard trimmers and beard shapers.

The Philishave shaver was invented by Philips engineer Alexandre Horowitz, who used rotating cutters instead of the reciprocating cutters that had been used in previous electric shavers.

The brand name Philishave was phased out in 2006 so shavers now bear only the Philips name. Philips is now co-branding their shavers sold in the US as "Philips Norelco" in preparation of a phase-out of the Norelco name.

According to instructions supplied with the units, the shaving heads need cleaning every 2 months and replacing every 18 months. However, not all Philips spare parts will fit well on all Philips shavers.

Heads are given an "HQ" number, such as HQ2, HQ3, HQ4, HQ5, etc., and this number should normally correspond with the first digit of the model number of the shaver. An exception is the 6000 series which takes HQ8 heads.[1]

Although the heads do look much the same, attempts to fit the wrong HQ number may fail; for example, an HQ5 head will not correctly engage with the spindle on a shaver model designed for an HQ3 or HQ4 head, due to a small extra piece of plastic in the centre of the HQ5 drive socket. Care should therefore be taken when choosing replacement parts.

Retrieved from "http://en.turkcewiki.org/w/index.php?title=Philishave&oldid=967023719"
This website is a mirror of Wikipedia, and is not affiliated with the Wikimedia Foundation.
Categories: