Jump to navigation Jump to search
For the city in Russia, see Petropavlovsk-Kamchatsky.
Place in North Kazakhstan Region, Kazakhstan

Petropavl (Kazakh: Петропавл, romanized: Petropavl) or Petropavlovsk (Russian: Петропавловск, tr. Petropavlovsk), is a city on the Ishim River in northern Kazakhstan close to the border with Russia, about 261 km west of Omsk along the Trans-Siberian Railway. It is the capital of the North Kazakhstan Region.[1] Population: 201,446 (2009 Census results);[2] 203,523 (1999 Census results).[2] The city is also known colloquially in the Kazakh language as Kyzylzhar (Kazakh: Қызылжар, romanized: Qyzyljar).

Petropavl was founded in 1752 as a Russian fort extending Russian settlement and influence into the nomadic Kazakh territories to the south. The fort got its name after two Christian saints, apostles Peter and Paul. It was granted the status of city in 1807. Petropavl was an important trading center until the Russian Revolution of 1917.[3] 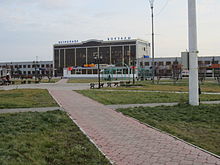 Petropavl has a a railway station with connections to the Russian capital Moscow and Kazakhstan's capital Nur-Sultan.

Petropavl Airport is located 11 km (7 mi) south of the city.

Petropavl is the location of North Kazakhstan State University, named for M. Kozybaev, established in 1937 as Petropavlovsk Teachers Training Institute.[6]

The city's bandy team in the Spartakiade 2009 on home ice was victorious.[7] In 2013 it was hosted in Petropavl again, this time the team from Khromtau won.[8] 12-17 December 2016 the Kazakh Cup, to the memory of Kazbek Baybulov, was played at Stadium Karasay in Petropavl.[9] The home team Volna captured the bronze medal.[10]

Olympic gold medal winning cyclist Alexander Vinokourov is a native of nearby Bishkul[11].

Retrieved from "http://en.turkcewiki.org/w/index.php?title=Petropavl&oldid=919256226"
This website is a mirror of Wikipedia, and is not affiliated with the Wikimedia Foundation.
Categories:
Hidden categories: