The Peterson Institute is not to be confused with the Peter G. Peterson Foundation, an entirely separate organization.

The Institute was founded by C. Fred Bergsten in 1981, in response to a proposal from the German Marshall Fund (GMF).[3] The President of the GMF, Frank Loy, as well as the President of the Council on Foreign Relations, Leslie Gelb, asked Bergsten to create a research institution focused on assessing the growing importance of the international economy in light of recent geopolitical events. During the 1970s, President Richard Nixon ended the link to the gold standard, the first oil shock occurred in 1973, and the first G5 summit convened. As a result, the new PIIE sought to conduct policy-oriented research on international economic issues by bringing together experts, academics, and policymakers.

The GMF committed an initial $4 million to the Institute. The PIIE's founding chairman was Peter G. Peterson, who had served on Nixon's Council on International Economic Policy and as Secretary of Commerce. Anthony M. Solomon (the Undersecretary of the Treasury for Monetary Affairs and President of the Federal Reserve Bank of New York) and Richard N. Cooper (a consultant to the National Security Council) also joined the PIIE in the early 1970s.[4]

Throughout the 1980s and 1990s, the PIIE expanded to become one of the most internationally recognized think tanks in Washington D.C. The Ford Foundation was also a major supporter of the PIIE, having provided a major grant in 1991. In the 1990s, the PIIE created a number of endowed chairs for its members: one in honor of Reginald Jones, the former CEO of General Electric, and another for Dennis Weatherstone, the former CEO of JP Morgan.[5]

It moved from 11 Dupont Circle to its current building on Massachusetts Avenue in 2001.

In 2006, a capital campaign led to the creation of a sizable endowment in order to celebrate the PIIE's 25th anniversary. Previously known as the Institute of International Economics, it changed its name that same year in recognition of Peter G. Peterson's role in the capital campaign and for his longstanding support of the Institute since the early 1980s. At its conference in New York, NY, a number of major economic figures attended: Alan Greenspan, former Federal Reserve Board Chairman; Robert Rubin, former Secretary of the Treasury; Jean-Claude Trichet, Governor of the European Central Bank, among others.[6]

Adam S. Posen succeeded Bergsten as President on January 1, 2013.[7] Michael A. Peterson succeeded his father Peter G. Peterson as Chairman in the spring of 2018.

The Institute's annual budget is about $12-13 million and it is financially supported by foundations, private corporations, and individuals, as well as earnings from its publications and capital fund.[8]

Notable resident scholars at the Peterson Institute include (as of March 2019):

The Peterson Institute has been at the forefront of research on the proposals by the Trump Administration of reforming the tax code. Comparative analyses in advanced economies show the tax proposal will increase the budget deficit, unless coupled with a reduction of tax loopholes.

In an opinion piece for The New York Times published in 2016, Steven Rattner called the new building of the Peterson Institute "the locker room of the Team Globalization and Free Trade cheering squad." We should not close our borders or retreat from the world, said Rattner, but free trade has winners and losers, and "we need to be more sensitive to the losers and try to help," for example by redistribution of income through the tax system, which, he said, we haven't been doing. He goes on to state that Ross Perot was right when he said that the North American Free Trade Agreement would transfer American jobs to Mexico, particularly in manufacturing. From 2009 to 2013, employment in the American auto manufacturing sector rose by 23%, from 560,000 to 690,000. But employment in the Mexican auto sector rose from 368,000 to 589,000, or 60%. "I’m happy that 221,000 more Mexicans got jobs," he writes, "but let’s be honest: Absent open borders, many of those jobs would have been in America." He concludes by pointing out that wages in American auto manufacturing are down by 12.7%. Furthermore, American auto manufacturing compensation was $35.67 an hour; in Mexico, it was $6.36 an hour. Adam Posen, then the Peterson Institute's director, responded that “fetishization” of any industry was “immoral.”[10] 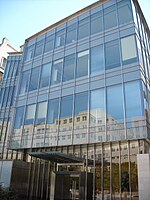 In 2001 the Peterson Institute moved into a building it commissioned and built at 1750 Massachusetts Avenue ("Embassy Row"), NW, Washington, D.C. It is located across from the main Brookings Institution building, diagonally across from Carnegie Endowment for International Peace, and next to the Paul H. Nitze School of Advanced International Studies.

The building was designed by James von Klemperer from the architectural firm Kohn Pedersen Fox. Its state-of-the-art conference center is named in honor of the Institute's founder, C. Fred Bergsten. The sculpture garden is named in honor of Institute benefactor Anthony M. Solomon. The building houses several pieces of art donated by Stephan Schmidheiny, a former director of the Institute, including a sculpture by Joan Miró and a painting by Elizabeth Murray. It also houses collections of Chinese and African art donated by William M. Keck, Ambassador John M. Yates, and Anthony M. Solomon.

The building was granted the Best Architecture for 2001 award by the Washington Business Journal and won a Best Design award from the American Institute of Architects in 2003.[11] Former U.S. Deputy Secretary of the Treasury and Under Secretary of State Stuart Eizenstat opined that the Peterson Institute building "is to international economics what the House that Ruth Built Yankee Stadium was to baseball".[11] A contemporary review by Washington Post architectural critic Benjamin Forgey observed that "this is a very pretty building, lovely to look at on its own," finding its proportions "satisfying" and its workmanship "superb".[12]

Retrieved from "http://en.turkcewiki.org/w/index.php?title=Peterson_Institute_for_International_Economics&oldid=942631395"
This website is a mirror of Wikipedia, and is not affiliated with the Wikimedia Foundation.
Categories:
Hidden categories: