Perelman School of Medicine at the University of Pennsylvania 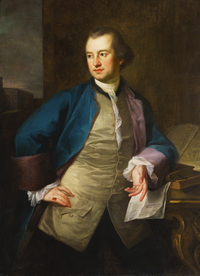 Surgeon's Hall, at right, was the site of medical lectures between 1765 and 1801

Perhaps this medical institution, the first of its kind in America, though small in its beginning, may receive a constant increase of strength, and annually exert new vigor. It may collect a number of young persons of more ordinary abilities, and so improve their knowledge as to spread its reputation to different parts. By sending these abroad duly qualified, or by exciting an emulation amongst men of parts and literature, it may give birth to other useful institutions of a similar nature, or occasional rise, by its example to numerous societies of different kinds, calculated to spread the light of knowledge through the whole American continent, wherever inhabited.[7]

That autumn, students enrolled for "anatomical lectures" and a course on "the theory and practice of physick." Modeling the school after the University of Edinburgh Medical School, medical lectures were supplemented with bedside teaching at the Pennsylvania Hospital.[8]

The School of Medicine's early faculty included nationally renowned physicians and scientists such as Benjamin Rush, Philip Syng Physick, and Robert Hare. In the mid-1800s, prominent faculty members included William Pepper, Joseph Leidy, and Nathaniel Chapman (founding president of the American Medical Association).[9] William Osler and Howard Atwood Kelly, two of the "founding four" physicians of The Johns Hopkins Hospital were drawn from Penn's medical faculty. Later, in 1910, the landmark Flexner Report on medical education reviewed Penn as one of the relatively few medical schools of the era with high standards in medical instruction, facilities, and research.[10]

In 2011, the University of Pennsylvania School of Medicine was renamed in recognition of a $225 million gift by Raymond and Ruth Perelman. Raymond G. Perelman and his son, Ronald Perelman, are both alumni of Penn's Wharton School.[11] It was the single largest gift made in the University's history, and it remains the largest donation ever made for naming rights to a medical school.[12] 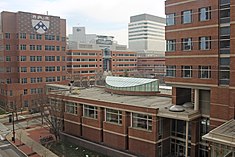 Between 1765 and 1801, medical school lectures were held in Surgeon's Hall on 5th Street in Center City, Philadelphia. In 1801, medical instruction moved with the rest of the university to 9th Street.[13] In the 1870s, the university moved across the Schuylkill River to a location in West Philadelphia. As part of this move, the medical faculty persuaded the university trustees to construct a teaching hospital adjacent to the new academic facilities.[14] As a result, Penn's medical school and flagship teaching hospital form part of the university's main campus and are located in close proximity to the university's other schools and departments. Although they are independent institutions, the Children's Hospital of Philadelphia and the Wistar Institute are also located on or adjacent to Penn's campus. 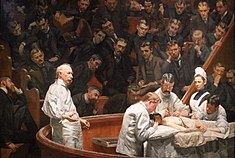 The Agnew Clinic (1889) by Thomas Eakins shows a mastectomy being performed in the clinic of Penn surgeon David Hayes Agnew. The painting is notable for showing the increasing specialization of surgical techniques and accessories in the late 1800s.

During the late nineteenth and early twentieth centuries, the School of Medicine was one of the earliest to encourage the development of the emerging medical specialties: neurosurgery, ophthalmology, dermatology, and radiology. Between 1910 and 1939, the chairman of the Department of Pharmacology, Alfred Newton Richards, played a significant role in developing the University as an authority of medical science, helping the United States to catch up with European medicine and begin to make significant advances in biomedical science.

In the 1950s and early 1960s, Dr. Jonathan Rhoads of the Department of Surgery (which he would later go on to head for many years) mentored Dr. Stanley Dudrick who pioneered the successful use of total parenteral nutrition (TPN) for patients unable to tolerate nutrition through their GI tract.[18]

In the 1990s and 2000s, Dr. Paul Offit, a professor of Pediatrics at the School of Medicine and Children's Hospital of Philadelphia, lead the scientific advances behind the modern RotaTeq vaccine for infectious childhood diarrhea.

In 2006, Drs. Kaplan and Shore of the Department of Orthopedics discovered the causative mutation in fibrodysplasia ossificans progressiva, an extremely rare disease of bone.[20]

Benchmark changes in the understanding of medical science and the practice of medicine have necessitated that the school change its methods of teaching, as well as its curriculum. Large changes were made in 1968, 1970, 1981, 1987, and 1997. The last significant change in 1997 brought about the institution of Curriculum 2000, "an integrated, multidisciplinary curriculum which emphasizes small group instruction, self directed learning and flexibility." Three themes, Science of Medicine, Art and Practice of Medicine, and Professionalism and Humanism, were developed by focus groups consisting of department chairpersons, course directors, and students.[21]

Biomedical Graduate Studies, contained within the Perelman School of Medicine, was established in 1985 and serves as the academic home within the University of Pennsylvania for roughly 700 students pursuing a PhD in the basic biomedical sciences. BGS consists of more than 600 faculty members across seven Penn schools and several associated institutes including Wistar Institute, Fox Chase Cancer Center, and Children's Hospital of Philadelphia.[22] There are eight graduate programs, labeled by the school as "graduate groups," that lead to a Ph.D. in basic biomedical sciences.[23]

All biomedical graduate studies students receive a stipend in addition to a full fellowship and tend to receive the degree within a median time frame of 5.4 years.[24] There is also the option for students to pursue an additional certificate in medicine, public health, and environmental health sciences.[25] Each graduate group has its own admission policy and training mission, and hence curriculum greatly varies.[22]

The Perelman School of Medicine and the University of Pennsylvania Health System (UPHS) comprise "Penn Medicine". Penn Medicine is an organizational structure designed to integrate Penn's clinical, educational, and research functions. Penn Medicine is governed by a board of trustees which in turn reports to the trustees of the university. Ralph Mueller serves as CEO of UPHS while J. Larry Jameson serves as Dean of Medicine and Executive Vice President of the health system. [26]

Main article: List of Centers and Institutes at the Perelman School of Medicine

The Perelman School of Medicine, in conjunction with the University of Pennsylvania Health System, has contained within it many centers and institutes dealing with clinical medicine, clinical research, basic science research, and translational research.[28]

Main article: Alumni of the Perelman School of Medicine at the University of Pennsylvania

Retrieved from "http://en.turkcewiki.org/w/index.php?title=Perelman_School_of_Medicine_at_the_University_of_Pennsylvania&oldid=947335961"
This website is a mirror of Wikipedia, and is not affiliated with the Wikimedia Foundation.
Categories:
Hidden categories: