The George Peabody Library, formerly known as the Library of the Peabody Institute of the City of Baltimore,[1] is the 19th-century focused research library of The Johns Hopkins University. It is located on the Peabody campus at West Mount Vernon Place in the Mount Vernon-Belvedere historic cultural neighborhood north of downtown Baltimore, Maryland, across from the landmark Washington Monument. The collections are available for use by the general public, in keeping with the famous Baltimorean merchant/banker/financier/philanthropist George Peabody's goal to create a library "for the free use of all persons who desire to consult it."[2]

The Peabody Institute Library was funded by George Peabody (1795–1869). Peabody, having become a wealthy man in Baltimore through commerce during the 1810s and 20s, following his brief service in the state militia defending the city against the famous British attack during the War of 1812, "gave $300,000 as a beginning sum for the Peabody Institute" in February 1857.[3] The Institute was originally planned to open in 1860, but border-state conflict in the region caused by the American Civil War delayed its establishing and construction until 1866, when Peabody dedicated the first segment West Wing of the new Peabody Institute to the citizens of Baltimore in appreciation of their kindness and hospitality. The Institute was designed to be a cultural center for the City of Baltimore, with plans for an art gallery, music school, a public lecture series, a series of cash awards with gold medals known as "Peabody Prizes" for the top graduates of the city's then-three public high schools (one of boys at Central High—now Baltimore City College—and two for girls at Eastern and Western High Schools), as well as a public, non-circulating reference library which was later moved to the second attached segment in the East Wing in 1876-1878.[4] This original Peabody Institute west wing opened in 1866 as Mr. Peabody, then a long-time resident of first New York City, then London, England, was greeted by the gathered thousands of Baltimore City Public School children as he stood on the steps of his landmark building overlooking the circle at the Washington Monument in the Mount Vernon-Belvedere neighborhood and the current library structure in the east wing was designed in the same identical style by the famed local architect Edmund G. Lind which opened to the public in 1878. The library remained part of the Peabody Institute until 1967, when it was transferred to the City of Baltimore and became a department in the nearby Enoch Pratt Free Library on Cathedral Street, the City and State's free public library system (oldest in America), which had been founded and endowed in 1882-1886 by George Peabody's friend and fellow Bay Stater, Enoch Pratt, (1808–1896). It was transferred to The Johns Hopkins University in 1982 and became part of the Eisenhower Library's Special Collections department at the Homewood campus and part of the JHU Sheridan Libraries system as the Peabody Institute itself affiliated with Hopkins. 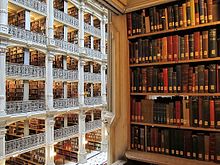 View of the George Peabody Library from the third floor stacks

The main collection reflects broad interests but focused on the 19th century, in keeping with Peabody's desire for it to be "well furnished in every department of knowledge and of the most approved literature."[5] The library's 300,000 volume collection is particularly strong in religion, British art, architecture, topography and history; American history, biography, and literature; Romance languages and literature; history of science; and geography, exploration and travel.[6] At the time of the original founding of JHU in 1876, by the will and bequest of local merchant/banker/financier and also later noted philanthropist Johns Hopkins, (1795-1873), who expected that his university would be located at his northeast Baltimore rural/suburban estate at Clifton. Following his death, his board of trustees along with their new recently recruited president Daniel Coit Gilman, (formerly of the University of California at Berkeley), for reasons of unexpected costs overdrafting the then considerable endowment bequest based on Baltimore and Ohio Railroad company stock which was then enduring financial difficulties, so decided to temporarily locate the academic buildings of the new style higher level university among the developed city streets in the downtown and Mt.Vernon-Belvedere neighborhood, just west near North Howard, West Centre and West Monument Streets. This was also adjacent to the city's premier public high school, The Baltimore City College, whom Gilman viewed as a suitable preparatory school but especially just a few blocks from this Peabody Library then just moving into its newly expanded quarters in order to take advantage of its already considerable reputation as literary and academic resources. Here Hopkins education remained for the next quarter-century before moving to its present Homewood campus in the north central city by 1914. Since the 1980s, the Sheridan Libraries at Johns Hopkins University continues to add books to the historic collection.

The library interior is often regarded as one of the most beautiful libraries in the world.[7] Completed in 1878, it was designed by Baltimore architect Edmund G. Lind in collaboration with the first Peabody provost, Nathaniel H. Morison, that described it as a "cathedral of books."[8] The visually stunning, monumental neo-Greco interior features an atrium that, over an alternating black and white slab marble floor, soars 61 feet high to a latticed skylight of frosted heavy glass, surrounded by five tiers of ornamental black cast-iron balconies and gold-scalloped columns containing closely packed book stacks. Between July 2002 and May 2004, the now historic library underwent a $1 million renovation and refurbishment.[9]

Retrieved from "http://en.turkcewiki.org/w/index.php?title=George_Peabody_Library&oldid=957562256"
This website is a mirror of Wikipedia, and is not affiliated with the Wikimedia Foundation.
Categories:
Hidden categories: