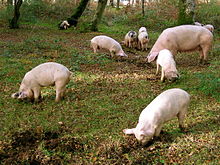 Modern-day pannage, or common of mast, in the New Forest

Pannage (also referred to as Eichelmast/Eckerich in Germany, Switzerland, Liechtenstein, Luxembourg, Austria, Slovenia & Croatia) is the practice of releasing livestock-pigs in a forest, so that they can feed on fallen acorns, beechmast, chestnuts or other nuts. Historically, it was a right or privilege granted to local people on common land or in royal forests.[1]

Pannage had two very useful purposes in Medieval times: in rooting around looking for nuts, they also turned the soil and broke it. The advantage of pigs rooting into it was that the soil was kept from packing down and would release nutrients for plant growth. It was also a method of fattening the pigs quickly for slaughter.

Especially in the eastern shires of England, pannage was so prominent a value in the economic importance of woodland that it was often employed, as in Domesday Book (1086), as a measurement. Customarily, a pig was given to the lord of the manor for every certain number of pigs loosed de herbagio, as the right of pannage was entered.[1] Edward Hasted quotes the Domesday Survey details for Norton in Kent. "Wood for the pannage of forty hogs".[2]

Pannage is no longer carried out in most areas, but is still observed in the New Forest of Southern England, where it is also known as common of mast. It is still an important part of the forest ecology, and helps the husbandry of the other New Forest livestock – pigs can safely eat acorns as a large part of their diet, whereas excessive amounts may be poisonous to ponies and cattle.

The minimum duration of the New Forest pannage season is 60 days,[3] but the start date varies according to the weather – and when the acorns fall. The Court of Verderers decides when pannage will start each year. At other times, pigs are not allowed to roam on the forest, with the exception that breeding sows (known as "privileged sows") are by custom allowed out, providing that they return to the owner's holding at night and are not a nuisance. The pigs each have several nose rings clipped into their noses to prevent them rooting too much and causing damage to grassland.

Retrieved from "http://en.turkcewiki.org/w/index.php?title=Pannage&oldid=917575495"
This website is a mirror of Wikipedia, and is not affiliated with the Wikimedia Foundation.
Categories:
Hidden categories: