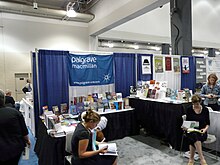 Palgrave Macmillan is a British academic and trade publishing company headquartered in the London Borough of Camden. Its programme includes textbooks, journals, monographs, professional and reference works in print and online.

Palgrave Macmillan was created in 2000 when St. Martin's Press Scholarly and Reference in the US united with Macmillan Press in the UK to combine their worldwide academic publishing operations. The company was known as simply Palgrave until 2002, but has since been known as Palgrave Macmillan.[1]

Palgrave is named after the Palgrave family. Classical historian Sir Francis Palgrave, who founded the Public Record Office, and his four sons were all closely tied with Macmillan Publishers in the 19th century:

Palgrave Macmillan represents the sales, marketing and distribution interests of W. H. Freeman, Worth Publishers, Sinauer Associates, and University Science Books outside the US, Canada, Australia and the Far East.

Palgrave Macmillan previously distributed I.B. Tauris in the U.S. and Canada; and Manchester University Press, Pluto Press, and Zed Books in the U.S.

Palgrave has been criticised for a pricing structure which "will limit readership to the privileged few", as opposed to options for "open access without tears" offered by DOAJ, Unpaywall and DOAB.[4]

Launched in 2012, Palgrave Pivot is an imprint of Palgrave Macmillan, aimed at publishing shorter, "rigorously peer-reviewed" monographs, focused on new important research across the Humanities and Social Sciences.[5]

Retrieved from "http://en.turkcewiki.org/w/index.php?title=Palgrave_Macmillan&oldid=964693392"
This website is a mirror of Wikipedia, and is not affiliated with the Wikimedia Foundation.
Categories:
Hidden categories: