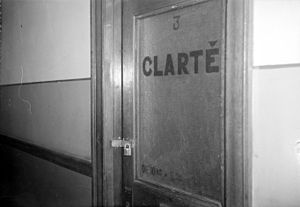 The doorway of the newspaper "La Clarté", weekly French-language newspaper of the Communist Party of Canada, padlocked by the police in Montreal in 1937.

The Padlock Law (officially called "Act to protect the Province Against Communistic Propaganda") (French: "La loi du cadenas" / "Loi protégeant la province contre la propagande communiste", 1 George VI Ch. 11) was an Act of the province of Quebec, passed on March 17, 1937, by the Union Nationale government of Maurice Duplessis, that was intended to prevent the dissemination of communist propaganda.[1]

The act made it illegal to "use [a house] or allow any person to make use of it to propagate Communism or Bolshevism by any means whatsoever" as well as the printing, publishing or distributing of "any newspaper, periodical, pamphlet, circular, document or writing, propagating Communism or Bolshevism." A violation of the Act subjected such property to being ordered closed by the Attorney General - "padlocked" - against any use whatsoever for a period of up to one year, and any person found guilty of involvement in prohibited media activities could be incarcerated for three to thirteen months. 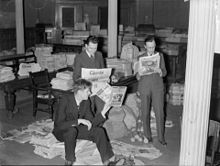 The law was extremely vague; it did not define Communism or Bolshevism in any concrete way. It denied both the presumption of innocence and freedom of speech to individuals. There were also concerns that the law would be used in order to arrest individual activists from international trade unions. Two union leaders were nearly arrested in that period.[2] Reports that it was used against the Jehovah's Witnesses are incorrect: the authorities typically used municipal by-laws, such as the one featured in Saumur v. The City of Quebec.

The federal government under Liberal Prime Minister William Lyon Mackenzie King could have used its power of disallowance to nullify the Padlock Law, as it had done to overturn equally controversial laws that had been passed by Alberta's Social Credit government around the same time. However, King chose not to intervene in Quebec. The most likely reason is that King did not want to alienate rural voters in Quebec, who continued to support the Liberals federally even as they supported the Union Nationale provincially.

In the 1957 decision of Switzman v. Elbling, the Supreme Court of Canada struck down the law as unconstitutional because it not only violated the constitutional right to free speech, but because provincial governments did not have the power to legislate in the field of criminal law.

Retrieved from "http://en.turkcewiki.org/w/index.php?title=Padlock_Law&oldid=958386563"
This website is a mirror of Wikipedia, and is not affiliated with the Wikimedia Foundation.
Categories: