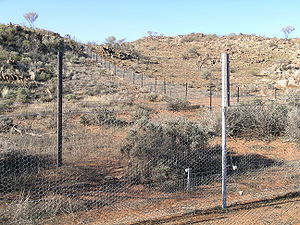 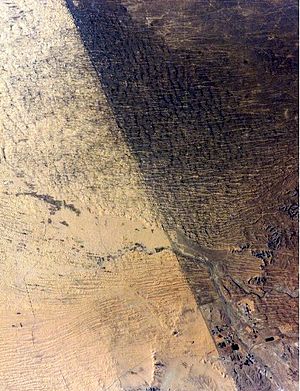 Satellite image of the border between Israel and Egypt. The Egyptian side, to the left, is overgrazed

Overgrazing occurs when plants are exposed to intensive grazing for extended periods of time, or without sufficient recovery periods.[1] It can be caused by either livestock in poorly managed agricultural applications, game reserves, or nature reserves. It can also be caused by immobile, travel restricted populations of native or non-native wild animals. However, "overgrazing" is a controversial concept, based on equilibrium system theory. A strong indicator of overgrazing is where additional feed needs to be brought in from outside the farm, often to support livestock through the winter. Traditionally this feed was sourced on the farm, with fewer animals being kept and some fields being used for hay and silage production. Modern farm businesses often choose to keep more animals than their land can support alone; buying in external feed to offset this.

It reduces the usefulness, productivity, and biodiversity of the land and is one cause of desertification and erosion. Overgrazing is also seen as a cause of the spread of invasive species of non-native plants and of weeds. It is reversed or prevented by moving grazers in large herds, such as the American bison of the Great Plains,[2][3] or migratory Wildebeests of the African savannas,[4] or by holistic planned grazing.[5]

Immobilized goat herd inside of a pen in an overgrazed habitation of Norte Chico, Chile

One indicator of overgrazing is that the animals run short of pasture. In some regions of the United States under continuous grazing, overgrazed pastures are predominated by short-grass species such as bluegrass and will be less than 2-3 inches tall in the grazed areas. In other parts of the world, overgrazed pasture is typically taller than sustainably grazed pasture, with grass heights typically over 1 meter and dominated by unpalatable species such as Aristida or Imperata. In all cases, palatable tall grasses such as orchard grass are sparse or non-existent. In such cases of overgrazing, soil may be visible between plants in the stand, allowing erosion to occur, though in many circumstances overgrazed pastures have a greater sward cover than sustainably grazed pastures.

Under rotational grazing, overgrazed plants do not have enough time to recover to the proper height between grazing events. The animals resume grazing before the plants have restored carbohydrate reserves and grown back roots lost after the last defoliation. The result is the same as under continuous grazing: in some parts of the United States tall-growing species die and short-growing species that are more subject to drought injury predominate the pasture, while in most other parts of the world tall, drought tolerant, unpalatable species such as Imperata or Aristida come to dominate. As the sod thins, weeds encroach into the pasture in some parts of the United States, whereas in most other parts of the world overgrazing can promote thick swards of native unpalatable grasses that hamper the spread of weeds.

Another indicator of overgrazing in some parts of North America is that livestock run out of pasture, and hay needs to be fed early in the fall. In contrast, most areas of the world do not experience the same climatic regime as the continental United States and hay feeding is rarely conducted.

Overgrazing is also indicated in livestock performance and condition. Cows having inadequate pasture immediately following their calf's weaning may have poor body condition the following season. This may reduce the health and vigor of cows and calves at calving. Also, cows in poor body condition do not cycle as soon after calving, which can result in delayed breeding and a long calving season. With good cow genetics, nutrition, ideal seasons and controlled breeding 55% to 75% of the calves should come in the first 21 days of the calving season. Poor weaning weights of calves can be caused by insufficient pasture, when cows give less milk and the calves need pasture to maintain weight gain.

Overgrazing typically increases soil erosion.[9] Reduction in soil depth, soil organic matter and soil fertility impair the land's future natural and agricultural productivity. Soil fertility can sometimes be mitigated by applying the appropriate lime and organic fertilizers. However, the loss of soil depth and organic matter takes centuries to correct. Their loss is critical in determining the soil's water-holding capacity and how well pasture plants do during dry weather.

Overgrazing results in increased trampling of soil by livestock, which increases soil compaction (Fuls, 1992) and thus, decreases the permeability of the soil. Furthermore, with more exposure of soil due to the decrease in plant biomass, the soil is exposed to increased levels of direct rainfall, creating a crust layer that is compacted and impermeable. This impermeability is what increases runoff and soil erosion [10].

With continued overutilization of land for grazing, there is an increase in degradation. This leads to poor soil conditions that only xeric and early successional species can tolerate [11].

Native plant grass species, both individual bunch grasses and in grasslands, are especially vulnerable. For example, excessive browsing of white-tailed deer can lead to the growth of less preferred species of grasses and ferns or non-native plant species [12] that can potentially displace native, woody plants, decreasing the biodiversity [13].

In the continental United States, to prevent overgrazing, match the forage supplement to the herd's requirement. This means that a buffer needs to be in the system to adjust for the fastest growth of forages.

The grazing guidelines in the table are for rotationally grazed, cool-season forages. When using continuous grazing, manage pasture height at one-half the recommended turn-in height for rotational grazing to optimize plant health. The growth habit of some forage species, such as alfalfa, does not permit their survival under continuous grazing. When managing for legumes in the stand, it is beneficial to use rotational grazing and graze the stand close and then give adequate rest to stimulate the legumes' growth.

Overgrazing is used as an example in the economic concept now known as the Tragedy of the Commons devised in a 1968 paper by Garrett Hardin.[14] This cited the work of a Victorian economist who used the over-grazing of common land as an example of behaviour. Hardin's example could only apply to unregulated use of land regarded as a common resource.

Normally, rights of use of Common land in England and Wales were, and still are, closely regulated, and available only to "commoners". If excessive use was made of common land, for example in overgrazing, a common would be "stinted", that is, a limit would be put on the number of animals each commoner was allowed to graze. These regulations were responsive to demographic and economic pressure; thus rather than let a common become degraded, access was restricted even further. This important part of actual historic practice was absent from the economic model of Hardin.[15] In reality the use of common land in England and Wales was a triumph of conserving a scarce resource using agreed custom and practice.

The violent herder–farmer conflicts in Nigeria, Mali, Sudan and other countries in the Sahel region have been exacerbated by land degradation and overgrazing.[16][17]

Various countries in Sub-Sahara Africa are affected by overgrazing and resulting ecological effects. In Namibia, overgrazing is considered the main cause of the thickening of shrubs and bushes at the expenses of grasses on a land area of up to 45 million hectares (see bush encroachment).

Overgrazing does not necessarily mean total denudation of the land. Overgrazing can also occur with native species. In the Australian Capital Territory, Australia the local government, in 2013, authorised the culling of 1455 kangaroos due to overgrazing.

Retrieved from "http://en.turkcewiki.org/w/index.php?title=Overgrazing&oldid=967219291"
This website is a mirror of Wikipedia, and is not affiliated with the Wikimedia Foundation.
Categories:
Hidden categories: