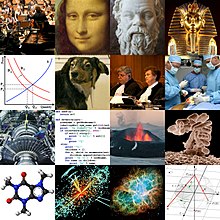 An academic discipline or field of study is a branch of knowledge, taught and researched as part of higher education. A scholar's discipline is commonly defined by the university faculties and learned societies to which they belong and the academic journals in which they publish research.

Disciplines vary between well-established ones that exist in almost all universities and have well-defined rosters of journals and conferences, and nascent ones supported by only a few universities and publications. A discipline may have branches, and these are often called sub-disciplines.

The following outline is provided as an overview of and topical guide to academic disciplines. In each case an entry at the highest level of the hierarchy (e.g., Humanities) is a group of broadly similar disciplines; an entry at the next highest level (e.g., Music) is a discipline having some degree of autonomy and being the basic identity felt by its scholars; and lower levels of the hierarchy are sub-disciplines not normally having any role in the structure of the university's governance.

Also a branch of electrical engineering

Retrieved from "http://en.turkcewiki.org/w/index.php?title=Outline_of_academic_disciplines&oldid=991635669"
This website is a mirror of Wikipedia, and is not affiliated with the Wikimedia Foundation.
Categories:
Hidden categories: