The city is in South Siberian forest steppe, in the basin of the middle current of the River Ural (near its confluence with the River Sakmara). The highest point of the city is 154.4 meters (507 ft).[citation needed]

The origins of the city's name[edit]

Several historians have tried to explain the origins of the city's name. It was traditionally accepted that the word "orenburg" means a fortress on the River Or.[13] In all probability, the word combination "orenburg" was proposed by I. K. Kirillov, who was the founder of the city. In 1734, in accordance with his project, a package of governmental documents was worked out. This was the starting point for Orenburg as a fortress city near the meeting of the Or and Ural rivers.

On 7 June 1734, "A Privilege for Orenburg" (tsar's edict) was ordered by Empress Anna Ivanovna. While a construction site of the main fortress changed many times (down the River Ural), the name "Orenburg" has not changed since its founding in 1743.

Between 1938 and 1957, the city was referred to as Chkalov,[14][15] named after the famous Soviet pilot Valery Chkalov, although he was not born in and never lived in Orenburg, and never visited Orenburg. In 1954, Chkalov's 5-meter bronze sculpture was erected on the occasion of his 50th birth anniversary; this was installed on a 7-meter pedestal in the Boulevard (on the riverside promenade of the city, commonly named "Belovka").

Orenburg was unofficially called the Asian capital of Russia.[16] 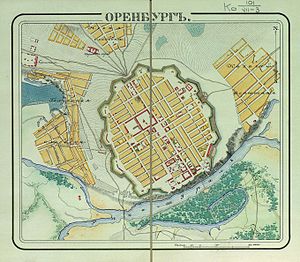 In 1734, the Russian Empire began expanding its control and influence in Asia starting from the construction of the fortress city called "Orenburg" on its eastern border (in Southern Ural). For this purpose, a settlement was founded here in 1735 - at the place where the Or and the Ural rivers join.

The initial site was chosen for settlement during the expedition of I.K. Kirilov, who initiated developmental activities in the region. He argued that the city was necessary "...for opening up transit routes to Bukhara, Badakhshan, Bulk, and to India", making it possible to receive "wealth from there — gold, lapis lazuli, and garnet." After his death, a new administrator of the Orenburg expedition, Vasily Tatishchev, was appointed. He did not consider this place to be convenient for construction of the city, because it was constantly flooded by the spring high waters. This encouraged to launch in 1739 preparations for building a new town with the old name downstream the river Ural (Yaik) on the mountain Krasnaya (Red). The old settlement was named the Orsk fortress (now the city of Orsk).

On 6 August 1741, the new town was founded. However, its construction did not start. The location on the mountain Krasnaya — treeless, rocky and remote from the river — was also inappropriate for building the town. A new administrator of the Orenburg expedition, Ivan Neplyuyev, was appointed.

On 19 (30) April 1743, Orenburg was founded for a third time, on the compound that was once the Berda fortress, 70 versts (75 km; 46 mi) from the Krasnogorsk mountain area. In the summer of 1742, Neplyuev personally chose a new place surrounded by forests and crop fields, where the Yaik and the Sakmara rivers meet. Now it is the historical centre of the city. The city built upon the mountain Krasnaya was named Krasnogorsk.

Orenburg, therefore, was successfully established by Ivan Neplyuyev in its present location approximately 250 kilometers (160 mi) west down the Ural from Orsk in 1743. This third Orenburg has functioned as an important military outpost on the border with the nomadic Kazakhs. It became the centre of the Orenburg Cossacks.

Orenburg played a major role in Pugachev's Rebellion (1773–1774), the largest peasant revolt in Russian history. At the time, it was the capital of a vast district and the seat of the governor. Yemelyan Pugachev besieged the city and its fortress from nearby Berda from October 1773 - March 26, 1774. The defense was organized by Governor of Orenburg lieutenant-general Reinsdorf.[17] General Golytsin defeated Pugachev at Berda, and later again at Kargala (north of Orenburg).[18] Most of the city was left in ruins, and thousands of inhabitants had died in the siege. Government forces crushed revolt towards the end of 1774 by General Michelsohn at Tsaritsyn. Further reprisals against rebel areas were carried out by General Peter Panin.

Alexander Pushkin visited Orenburg in 1833 during a research trip for his books The History of Pugachev and his famous novel The Captain's Daughter. He met his friend Vladimir Dal here, who would later write the first serious dictionary of the Russian language.

Orenburg was the base for General Perovsky's expeditions against the Khanate of Khiva in the 1830s through 1850s. After the incorporation of Central Asia into the Russian Empire, Orenburg became a trading station and, since the completion of the Trans-Aral Railway, a prominent railway junction en route to the new Central Asian possessions and to Siberia.

From 1938 to 1957, the city bore the name Chkalov (Чка́лов) (after the prominent test pilot Valery Chkalov). The city's distance from the German invasion during World War II led many Soviet enterprises to flee there, helping to spur the city's economic growth.

In 2020, the city was back on the map with allegations of police brutality when, on February 6 of that year, in a penal colony in Orenburg, Russia, prison guards severely beat with clubs five Jehovah’s Witnesses.[19]

Orenburg has been a major railway centre ever since the Samara-Zlatoust and Orenburg-Tashkent railroads were completed, respectively in 1876 and 1905.[23]

Orenburg's main airport is the Orenburg Tsentralny Airport,[24] located about 25 kilometers (16 mi) east of the city, on the Orsk destination, and used to be the headquarters of now defunct Orenair.[24]

There is an airbase located 9 kilometers (5.6 mi) southwest of the city.

Orenburg has a relatively dry humid continental climate (Köppen climate classification Dfa) with quite long and hot summers and long and cold winters. April and October are transition months, with the rest of the months being either summer or winter.

Orenburg is a regional centre of education and has a number of cultural institutions and museums. 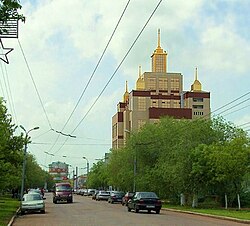 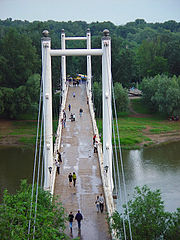 Pedestrian bridge over Ural River.The bridge is between Europe and Asia

Mountain and river tourism are developed in the region. There are a number of fast mountain rivers and rocks in pleated spurs of the southern edge of the Urals range, popular with tourists. The city is known for its location between Europe and Asia. The Ural River marks the border of Asia and Europe, and there is a bridge which connects the two sides.

The city is famous for its down Orenburg shawls. The thinnest lacy design, knitted by hand shawls and cobweb-like kerchiefs (pautinkas), is not only warm, but also is used for decorative purposes.

A famous boulevard on the embankment of the Ural River is one of the most notable places in Orenburg.

Orenburg TV Tower is a guyed mast of unusual design. It is a 200-meter (660 ft) tall mast equipped with six crossbars running from the mast structure to the guys.[29]

Orenburg is twinned with:[34]

Retrieved from "http://en.turkcewiki.org/w/index.php?title=Orenburg&oldid=941102134"
This website is a mirror of Wikipedia, and is not affiliated with the Wikimedia Foundation.
Categories:
Hidden categories: