Jump to navigation Jump to search
Typographical characters
Both º and ª redirect here. These are different characters from the superior lower-case letters o or a, the degree symbol °, or the ring diacritic ˚.

In written languages, an ordinal indicator is a character, or group of characters, following a numeral denoting that it is an ordinal number, rather than a cardinal number.

Also commonly encountered are the superscript or superior (and often underlined) masculine ordinal indicator, º, and feminine ordinal indicator, ª, originally from Romance, but via the cultural influence of Italian by the 18th century, widely used in the wider cultural sphere of Western Europe,[citation needed] as in 1º primo and 1ª prima "first, chief; prime quality".

The practice of underlined (or doubly underlined) superscripted abbreviations was common in 19th-century writing (not limited to ordinal indicators in particular, and also extant in the numero sign №), and was also found in handwritten English until at least the late 19th century (e.g. "first" abbreviated 1st or 1st).[1]

In Spanish, Portuguese, Italian, and Galician, the ordinal indicators º and ª are appended to the numeral depending on whether the grammatical gender is masculine or feminine. The indicator may be given an underline but this is not ubiquitous (in digital typography this depends on the font: Cambria and Calibri, for example, have underlined ordinal indicators; most other fonts do not).

Examples of the usage of ordinal indicators in Italian are:

The practice of indicating ordinals with superscript suffixes may originate with the practice of writing a superscript o to indicate a Latin ablative in pre-modern scribal practice. This ablative desinence happened to be frequently combined with ordinal numerals indicating dates (as in tertio die (written iiio die) "on the third day" or in Anno Domini years, as in anno millesimo [...] ab incarnatione domini nostri Iesu Christi (written an ͂ Mo [...] dm ͂i nri ih ͂u xp ͂i or similarly) "in the thousandth [...] year after the incarnation of our lord Jesus Christ").[citation needed]

The usage of terminals in the vernacular languages of Europe derives from Latin usage, as practised by scribes in monasteries and chanceries before writing in the vernacular became established. The terminal letters used depend on the gender of the item to be ordered and the case in which the ordinal adjective is stated, for example primus dies ("the first day", nominative case, masculine), but primo die ("on the first day", ablative case masculine), shown as Io or io. As monumental inscriptions often refer to days on which events happened, e.g. "he died on the tenth of June", the ablative case is generally used: Xo (decimo) with the month stated in the genitive case. Examples:[5]

In correct typography, the ordinal indicators ª and º should be distinguishable from other characters.[6]

Comparison between the ordinal indicator (left) and the degree sign (right), in a monotone font and in a variable stroke width font.

The masculine ordinal indicator º is often confused with the degree sign ° (U+00B0), which looks very similar, and is available on the Italian and Latin American keyboard layouts. It was common in the early days of typography to use the same character for both.[citation needed] The degree sign is a uniform circle and is never underlined. The masculine ordinal indicator is the shape of a lower-case letter o, and thus may be oval or elliptical, have a varying line thickness.

Ordinal indicators may also be underlined. In Brazil underlining is mandatory,[7] in Portugal it is not mandatory[8] but it is "advisable" to avoid confusion[6] with the degree sign. 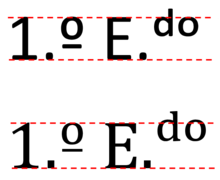 Alignment of the ordinal indicator (left) and superscript characters (right), in the Portuguese abbreviation “1.º E.ᵈᵒ” (1st floor left), in a monotone font and in a variable stroke width font.

Comparison between ordinal indicator and superscript markup (left) and superscript characters (U+1D48 and U+1D52) (right), in the Portuguese abbreviation “1.º E.ᵈᵒ” (1st floor left), in a monotone font and in a variable stroke width font.

There are superscript versions of the letters ⟨a⟩ and ⟨o⟩ in Unicode, these are different characters and should not be used as ordinal indicators.

The majority of character sets intended to support Galician, Portuguese and/or Spanish have those two characters encoded. In detail (in hexadecimal):

In Linux, º can be obtained by AltGr+⇧ Shift+M or Composeo_, and ª by AltGr+⇧ Shift+F or Composea_. On Chrome OS, the same AltGr+F, AltGr+M facilities are included in the UK-Extended language setting but the Compose function requires a (Google) add-on to Chrome.

On many mobile devices keyboards (tablets, smartphones, etc.) ª and º can be obtained by keeping the pressure on the keys A and O,[9] respectively, and then selecting the desired character.

Some languages use superior letters as a typographic convention for abbreviations. Oftentimes, the ordinal indicators º and ª are used in this sense, and not to indicate ordinal numbers. Some might say that this is a misuse of ordinal indicators:

In German, Czech, Slovak, Slovenian, Serbian and some other languages, the role of the ordinal indicator is served by a simple dot, typographically identical to period or full stop. Writing out the endings for various cases, as sometimes happens in Czech and Slovak, is considered incorrect and uneducated. Should a period or full stop follow this dot, it is omitted. In Czech and Slovak, numerals with ordinal dot are mostly used only in tables, lists etc., or in case of large (or long) numbers; within a sentence it is recommended to write out the form with letters in full.

Serbian language uses the dot in role of the ordinal indicator only past Arabic numerals, while Roman numerals are used without a dot.

There is a problem with autocorrection, mobile editors etc. which often forces a capital initial letter to the word following the ordinal number.

In 19th-century handwriting, these terminals were often elevated, that is to say written as superscripts (e.g. 2nd, 34th). With the gradual introduction of the typewriter in the late 19th century, it became common to write them on the baseline in typewritten texts,[11] and this usage even became recommended in certain 20th-century style guides. Thus, the 17th edition of The Chicago Manual of Style states: "The letters in ordinal numbers should not appear as superscripts (e.g., 122nd not 122nd)", as do the Bluebook[12] and style guides by the Council of Science Editors,[13] Microsoft,[14] and Yahoo.[15] Two problems are that superscripts are used "most often in citations" and are "tiny and hard to read".[12] Some word processors format ordinal indicators as superscripts by default (e.g. Microsoft Word[16]). Style guide author Jack Lynch (Rutgers) recommends turning off automatic superscripting of ordinals in Microsoft Word, because "no professionally printed books use superscripts".[17]

These indicators use superscript formatting whenever it is available.

The rule in Catalan is to follow the number with the last letter in the singular and the last two letters in the plural.[18] Most numbers follow the pattern exemplified by vint "20" (20è m sg, 20a f sg, 20ns m pl, 20es f pl), but the first few ordinals are irregular, affecting the abbreviations of the masculine forms. superscripting is not standard.

Unlike other Germanic languages, Dutch is similar to English in this respect: the French layout with e used to be popular, but the recent spelling changes now prescribe the suffix ‑e. Optionally ‑ste and ‑de may be used, but this is more complex: 1ste (eerste), 2de (tweede), 4de (vierde), 20ste (twintigste)...[19]

In Finnish orthography, when the numeral is followed by its head noun (which indicates the grammatical case of the ordinal), it is sufficient to write a period or full stop after the numeral: Päädyin kilpailussa 2. sijalle "In the competition, I finished in 2nd place". However, if the head noun is omitted, the ordinal indicator takes the form of a morphological suffix, which is attached to the numeral with a colon. In the nominative case, the suffix is ‑nen for 1 and 2, and ‑s for larger numerals: Minä olin 2:nen, ja veljeni oli 3:s "I came 2nd, and my brother came 3rd". This is derived from the endings of the spelled-out ordinal numbers: ensimmäinen, toinen, kolmas, neljäs, viides, kuudes, seitsemäs...

Numerals from 3 up form their ordinals uniformly by adding the suffix -ú: 3ú, 4ú, 5ú, etc. When the ordinal is written out, the suffix adheres to the spelling restrictions imposed by the broad/slender difference in consonants and is written -iú after slender consonants; but when written as numbers, only the suffix itself (-ú) is written. In the case of 4 (ceathair), the final syllable is syncopated before the suffix, and in the case of 9 (naoi), 20 (fiche), and 1000 (míle), the final vowel is assimilated into the suffix.

The numbers 1 (aon) and 2 (dó) both have two separate ordinals: one regularly formed by adding -ú (aonú, dóú), and one suppletive form (céad, dara). The regular forms are restricted in their usage to actual numeric contexts, when counting. The latter are also used in counting, especially céad, but are used in broader, more abstract senses of 'first' and 'second' (or 'other'). In their broader senses, céad and dara are not written as 1ú and 2ú, though 1ú and 2ú may in a numeric context be read aloud as céad and dara (e.g., an 21ú lá may be read as an t-aonú lá is fiche or as an chéad lá is fiche).

One or two letters of the spelled-out numeral are appended to it (either after a hyphen or, rarely, in superscript). The rule is to take the minimal number of letters that include at least one consonant phoneme. Examples: 2-му второму /ftɐromu/, 2-я вторая /ftɐraja/, 2-й второй /ftɐroj/ (note that in the second example the vowel letter я represents two phonemes, one of which (/j/) is consonant).

The general rule is that :a (for 1 and 2) or :e (for all other numbers, except 101:a, 42:a, et cetera, but including 11:e and 12:e) is appended to the numeral. The reason is that -a and -e respectively end the ordinal number words. The ordinals for 1 and 2 may however be given an -e form (förste and andre instead of första and andra) when used about a male person (masculine natural gender), and if so they are written 1:e and 2:e. When indicating dates, suffixes are never used. Examples: 1:a klass (first grade (in elementary school)), 3:e utgåvan (third edition), but 6 november. Furthermore, suffixes can be left out if the number obviously is an ordinal number, example: 3 utg. (3rd ed). Using a full stop as an ordinal indicator is considered archaic, but still occurs in military contexts. Example: 5. komp (5th company).

The same usage, apparently borrowed from German,[20] is now a standard in Polish, where it replaced the superscript of the last syllable (following complex declension and gender patterns, e.g. 1szy, 7ma, 24te, 100ny).

Numbers in Malay and Indonesian are preceded by the ordinal prefix ke-; for example, ke-7, "seventh". The exception is pertama which means "first".

Numbers in Filipino are preceded by the ordinal prefix ika- or pang- (the latter subject to sandhi; for example, ika-7 or pam-7, "seventh". The exception is una, which means "first".

In Chinese and Japanese, an ordinal number is prefixed by 第 dì / dai; for example, 第一 "first", 第二 "second".

Retrieved from "http://en.turkcewiki.org/w/index.php?title=Ordinal_indicator&oldid=974977162"
This website is a mirror of Wikipedia, and is not affiliated with the Wikimedia Foundation.
Categories:
Hidden categories: