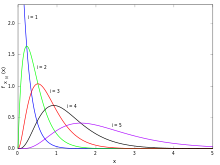 Important special cases of the order statistics are the minimum and maximum value of a sample, and (with some qualifications discussed below) the sample median and other sample quantiles.

For example, suppose that four numbers are observed or recorded, resulting in a sample of size 4. If the sample values are

the order statistics would be denoted

where the subscript (i) enclosed in parentheses indicates the ith order statistic of the sample.

The sample range is the difference between the maximum and minimum. It is a function of the order statistics:

A similar important statistic in exploratory data analysis that is simply related to the order statistics is the sample interquartile range.

The sample median may or may not be an order statistic, since there is a single middle value only when the number n of observations is odd. More precisely, if n = 2m+1 for some integer m, then the sample median is

and so is an order statistic. On the other hand, when n is even, n = 2m and there are two middle values,

, and the sample median is some function of the two (usually the average) and hence not an order statistic. Similar remarks apply to all sample quantiles.

From now on, we will assume that the random variables under consideration are continuous and, where convenient, we will also assume that they have a probability density function (PDF), that is, they are absolutely continuous. The peculiarities of the analysis of distributions assigning mass to points (in particular, discrete distributions) are discussed at the end.

For a random sample as above, with cumulative distribution

the corresponding probability density function may be derived from this result, and is found to be[2]

Moreover, there are two special cases, which have CDFs which are easy to compute.

Which can be derived by careful consideration of probabilities.

We assume throughout this section that

is a random sample drawn from a continuous distribution with cdf

we obtain the corresponding random sample

from the standard uniform distribution. Note that the order statistics also satisfy

The probability density function of the order statistic

that is, the kth order statistic of the uniform distribution is a beta-distributed random variable.[3][4]

The proof of these statements is as follows. For

, so we have to calculate the probability that exactly k − 1, 1 and n − k observations fall in the intervals

respectively. This equals (refer to multinomial distribution for details)

and the result follows.

Similarly, for i < j, the joint probability density function of the two order statistics U(i) < U(j) can be shown to be

which is (up to terms of higher order than

One reasons in an entirely analogous way to derive the higher-order joint distributions. Perhaps surprisingly, the joint density of the n order statistics turns out to be constant:

One way to understand this is that the unordered sample does have constant density equal to 1, and that there are n! different permutations of the sample corresponding to the same sequence of order statistics. This is related to the fact that 1/n! is the volume of the region

, i.e. maximum minus the minimum. More generally, for

also has a Beta distribution:

From these formulas we can derive the covariance between two order statistics:

The formula follows from noting that

and comparing that with

, which is the actual distribution of the difference.

random samples from an exponential distribution with parameter λ, the order statistics X(i) for i = 1,2,3, ..., n each have distribution

where the Zj are iid standard exponential random variables (i.e. with rate parameter 1). This result was first published by Alfréd Rényi.[5][6]

The Laplace transform of order statistics may be sampled from an Erlang distribution via a path counting method[clarification needed].[7]

If FX is absolutely continuous, it has a density such that

, and we can use the substitutions

to derive the following probability density functions for the order statistics of a sample of size n drawn from the distribution of X:

An interesting question is how well the order statistics perform as estimators of the quantiles of the underlying distribution.

The simplest case to consider is how well the sample median estimates the population median.

As an example, consider a random sample of size 6. In that case, the sample median is usually defined as the midpoint of the interval delimited by the 3rd and 4th order statistics. However, we know from the preceding discussion that the probability that this interval actually contains the population median is

Although the sample median is probably among the best distribution-independent point estimates of the population median, what this example illustrates is that it is not a particularly good one in absolute terms. In this particular case, a better confidence interval for the median is the one delimited by the 2nd and 5th order statistics, which contains the population median with probability

With such a small sample size, if one wants at least 95% confidence, one is reduced to saying that the median is between the minimum and the maximum of the 6 observations with probability 31/32 or approximately 97%. Size 6 is, in fact, the smallest sample size such that the interval determined by the minimum and the maximum is at least a 95% confidence interval for the population median.

For the uniform distribution, as n tends to infinity, the pth sample quantile is asymptotically normally distributed, since it is approximated by

For a general distribution F with a continuous non-zero density at F −1(p), a similar asymptotic normality applies:

where f is the density function, and F −1 is the quantile function associated with F. One of the first people to mention and prove this result was Frederick Mosteller in his seminal paper in 1946.[8] Further research led in the 1960s to the Bahadur representation which provides information about the errorbounds.

An interesting observation can be made in the case where the distribution is symmetric, and the population median equals the population mean. In this case, the sample mean, by the central limit theorem, is also asymptotically normally distributed, but with variance σ2/n instead. This asymptotic analysis suggests that the mean outperforms the median in cases of low kurtosis, and vice versa. For example, the median achieves better confidence intervals for the Laplace distribution, while the mean performs better for X that are normally distributed.

It can be shown that

with Zi being independent identically distributed exponential random variables with rate 1. Since X/n and Y/n are asymptotically normally distributed by the CLT, our results follow by application of the delta method.

Moments of the distribution for the first order statistic can be used to develop a non-parametric density estimator.[9] Suppose, we want to estimate the density

, which are i.i.d with distribution function

The expected value of the first order statistic

is the quantile function associated with the distribution

. This equation in combination with a jackknifing technique becomes the basis for the following density estimation algorithm,

In contrast to the bandwidth/length based tuning parameters for histogram and kernel based approaches, the tuning parameter for the order statistic based density estimator is the size of sample subsets. Such an estimator is more robust than histogram and kernel based approaches, for example densities like the Cauchy distribution (which lack finite moments) can be inferred without the need for specialized modifications such as IQR based bandwidths. This is because the first moment of the order statistic always exists if the expected value of the underlying distribution does, but the converse is not necessarily true.[10]

. To find the probabilities of the

The cumulative distribution function of the

order statistic can be computed by noting that

Note that the probability mass function of

is just the difference of these values, that is to say

The problem of computing the kth smallest (or largest) element of a list is called the selection problem and is solved by a selection algorithm. Although this problem is difficult for very large lists, sophisticated selection algorithms have been created that can solve this problem in time proportional to the number of elements in the list, even if the list is totally unordered. If the data is stored in certain specialized data structures, this time can be brought down to O(log n). In many applications all order statistics are required, in which case a sorting algorithm can be used and the time taken is O(n log n).

Retrieved from "http://en.turkcewiki.org/w/index.php?title=Order_statistic&oldid=964987626"
This website is a mirror of Wikipedia, and is not affiliated with the Wikimedia Foundation.
Categories:
Hidden categories: