Order of the Dannebrog

Marshall of the Queen with Grand Cross

The Order of the Dannebrog (Danish: Dannebrogordenen)[3] is a Danish order of chivalry instituted in 1671 by Christian V. Until 1808, membership in the order was limited to fifty members of noble or royal rank[4] who formed a single class known as White Knights to distinguish them from the Blue Knights who were members of the Order of the Elephant.[5] In 1808, the Order was reformed and divided into four classes. The Grand Commander class is reserved to persons of princely origin. It is awarded only to royalty with close family ties with the Danish Royal House. The statute of the Order was amended in 1951 by a Royal Ordinance so that both men and women could be members of the Order.

Today, the Order of the Dannebrog is a means of honouring and rewarding the faithful servants of the modern Danish state for meritorious civil or military service, for a particular contribution to the arts, sciences or business life or for those working for Danish interests.

The badge of the Order is a white enamelled Dannebrog cross (i.e., a cross pattée, the lower arm being longer than the others) with a red enamelled border, for the Knights in silver and for everyone else in gold or silver gilt. At the top of this cross is the royal cypher of the bestowing monarch crowned with the distinctive Danish royal crown[a] On its front, the cross bears the royal cyphers of Christian V at its centre, as well as the motto of the Order: Gud og Kongen (God and the King) on its arms. On its reverse are found the crowned royal cyphers of Valdemar II Sejr, Christian V and Frederik VI,[b] as well as the years 1219, 1671 and 1808, the years that each of them ascended the Danish throne. In each of the four angles of the cross is found a small Danish royal crown.

The Grand Cross can, as a special honor, be awarded "with diamonds". There is also a Cross of Honour (D.Ht.) (Dannebrogordens Hæderstegn).[2]

The collar of the Order is made of gold, with small enamelled Dannebrog crosses alternating with alternating crowned royal cyphers representing Kings Valdemar II Sejr and Christian V, the reputed and actual founders of the Order. When the collar is worn the sash is not worn.

The star of the Order is an eight-pointed silver star with straight rays with an enamelled Dannebrog cross (similar to the front of the badge but without the royal cypher above and the royal crowns between the arms of the cross) at the centre.

The breast cross of the Order is similar to the cross on the star but larger and with faceted silver instead of white enamel and without the silver rays of the star.

The ribbon of the Order is white silk moiré with red borders, the national colours of Denmark.[2]

The Order originally had a distinctive habit worn by the knights (after 1808, by the Knights Grand Cross) on very solemn occasions. The habit consisted of a white doublet, white breeches, white stockings and white shoes, over which was worn a red mantle with a white lining and with the star of the order embroidered in silver on its left side. Over this red mantle was worn a short white shoulder cape with a standing collar embroidered in gold, upon which was worn the collar of the Order (the habit was always worn with the collar and never with the ribbon of the Order). The habit also had a black hat with a plume of white and red ostrich feathers. This habit was almost identical to that worn by the knights of the Order of the Elephant.

Each Danish ministry has a quota of Knights and Knights 1st class that they may use at their discretion. It is most often given to high-ranking officers of the police, armed forces and emergency services.

Also used for politicians in Folketinget after 8 years of elected service. Ministers are given the rank of Knight 1st Class.

Grand Cross is most often used for admirals, generals, Supreme-court judges, ambassadors and similar as a reward for very meritorious service to Denmark.

Grand Cross with Breaststar with Diamonds[d] is most often given to high-ranking officers of the Royal Court, such as Hofmarskals.

Finally, the Grand Commander grade is only given to 8 people. The reigning monarch is always a Grand Commander, and he/she may give the grade to 7 others – most often close family. 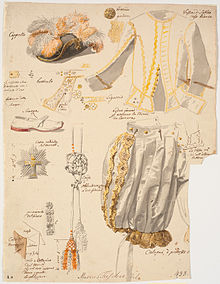 Details of the vestments of the Knights of the Dannebrog. Ca. 1750.

The insignia of the Order must be returned upon the death of the holder. 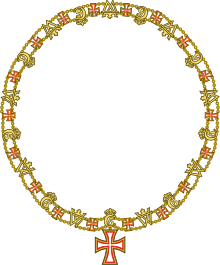 Collar of the Order of the Dannebrog.

It is possible for membership in the Order to be revoked. Before 1808, only two people have had their membership revoked, Peder Griffenfeld who was charged with treason, and Samuel Christoph von Plessen who was charged with looting and gross misconduct. In more recent times it has been revoked on basis of criminality, such as Peter Adler Alberti (1910), Erik Ninn-Hansen (1995), and Peter Brixtofte (2008).

Below is a list of jewelers who have made the insignia for the Order:

Anton Michelsen was made a part of Royal Copenhagen A/S who is now the supplier.

Retrieved from "http://en.turkcewiki.org/w/index.php?title=Order_of_the_Dannebrog&oldid=935868864"
This website is a mirror of Wikipedia, and is not affiliated with the Wikimedia Foundation.
Categories:
Hidden categories: