Orange County is a county located in the central portion of the U.S. state of Florida. As of the 2010 census, the population was 1,145,956,[2] making it Florida's fifth most populous county. The county seat is Orlando.[3]

Orange County is the central county of the Orlando-Kissimmee-Sanford, Florida Metropolitan Statistical Area.

The land that is Orange County was part of the first land to come up from below the Early Oligocene sea 33.9–28.4 million years ago and is known as Orange Island. Orange County's Rock Spring location is a Pleistocene fossil-bearing area and has yielded a vast variety of birds and mammals including giant sloth, mammoth, camel, and the dire wolf dating around 1.1 million years ago.[4]

Immediately following the transfer of Florida to the United States in 1821, Governor Andrew Jackson created two counties: Escambia to the west of the Suwannee River and St. Johns to the east.[5] In 1824, the area to the south of St. Johns County was organized as Mosquito County, and Enterprise was named its county seat. This large county took up much of central Florida. It was renamed as Orange County in 1845 when Florida became a state.[6] After population increased in the region, the legislature organized several counties, such as Osceola, Seminole, Lake, and Volusia, from its territory.

During the post-Reconstruction period, whites committed a high rate of racial violence against blacks in Orange County; they exercised terrorism to re-establish and maintain white supremacy. Whites lynched 33 African Americans here from 1877 to 1950; most were killed in the decades around the turn of the 20th century. This was the highest total of any county in the state, and sixth highest of any county in the country.[7] Florida had the highest per capita rate of lynchings of any state in the South, where the great majority of these extrajudicial murders took place.[8]

Among the terrorist lynchings was the death of Julius "July" Perry of Ocoee, whose body was found November 3, 1920, hanged from a lightpole in Orlando, near the house of a judge known to be sympathetic to black voting.[7] But this was part of a much larger story of KKK and other white attempts to suppress black voting in Ocoee and the state. African Americans had organized for a year to increase voter turnout for the 1920 presidential election, with organizations helping prepare residents for voter registration, paying for poll taxes, and similar actions. On Election Day in Ocoee, blacks were turned away from the polls. Perry, a prosperous farmer, was suspected of sheltering Mose Norman, an African-American man who had tried to vote.[9] After Norman was twice turned away, white violence broke out, resulting in a riot through the black community, leaving an estimated 50 to 60 blacks dead and all the properties destroyed. Many blacks fled from Ocoee to save their lives, and the town became all-white.[9][7] Voting efforts were suppressed for decades.

Orange County was renamed from Mosquito County for the fruit that constituted the county's main commodity crop. At its peak in the early 1970s, some 80,000 acres (320 km2) were planted in citrus in Orange County.[citation needed] The dark-green foliage of orange trees filled the county, as did the scent of the orange blossoms when in bloom. Fewer commercial orange groves remained by the end of the twentieth century. The majority of groves were destroyed by the freezing temperatures that occurred in the successive winters of 1985–1986, in particular by the January 1985 cold wave, the worst since 1899.[citation needed]

The financial setbacks, not the first in the grove region's history, were too challenging for many growers. Economically destroyed, many walked away from the land. Others awaited other opportunities. One of the region's major land owners and growers was the Tropicana company. They withdrew rather than try to come back from these seemingly endless generational decimation. With no realistic avenues for agricultural use of this rural land, and Florida's continuing strong population growth and its attendant needs (aided and supported by the success of nearby Walt Disney World and Universal Studios Florida), these areas began to be developed for housing. However, several packing facilities and wholesalers are still in Orange County.[citation needed] 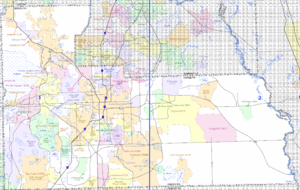 In 2010, 5.9% of the population considered themselves to be of only "American" ancestry (regardless of race or ethnicity.)[17]

The county functions under a charter form of government. The charter serves as a constitution, detailing the structure and operation of the local government. A Charter Review Commission has the power to consider and place amendments on the ballot. Voters then decide whether to accept or reject all amendments put forth. If voters approve an amendment, it is then inserted into the charter.

Four districts of the US House of Representatives represent parts of Orange County.

Places include: Maitland, Winter Park and parts of Orlando

Places include: parts of Orlando

Orange County residents are represented in Tallahassee with 3 Senate seats.

Orange County residents are represented in Tallahassee with 9 House seats.

The Orange County Public Schools deliver public education to students countywide. Its functions and expenditures are overseen by an elected school board composed of a chairman, elected at-large; and seven members, elected from single-member districts. Each member is elected to a four-year term: the chairman and three other members are elected in gubernatorial election years, while the other four are elected in presidential election years. The school system operates 182 schools (123 elementary, 3 K-8, 35 middle, 19 high, and 4 exceptional learning). In October 2012, the district had 183,562 students, making it the fourth-largest school district statewide and eleventh in the nation.[29]

The University of Central Florida is the sole public university. A fall 2012 enrollment of 59,767, currently places it second in the nation amongst public colleges and universities for student enrollment.[30] The university's massive campus is situated in northeast Orange County.

Nearby Winter Park is home to Rollins College, a private college situated only a few miles from Downtown Orlando. In 2012, it was ranked #1 by U.S. News & World Report amongst regional universities in the South.[31]

The law schools for Barry University and Florida A&M are also conveniently located in Downtown Orlando.

Full Sail University is a for-profit university in Winter Park, Florida. Full Sail is not regionally accredited, but is nationally accredited by the Accrediting Commission of Career Schools and Colleges (ACCSC) to award associate's, bachelor's degrees, and master's degrees in audio, film, design, computer animation, business, and other fields.[10] The school offers 35 degree programs and 2 graduate certificates and has a student population of more than 16,800.

One exception exists in the cities of Maitland and Winter Park which are each part of a separate library taxing districts and as a result residents of these cities are not entitled to receive resident borrowing privileges at OCLS branches even though they are technically and legally residents of Orange County, instead an agreement was reached between Maitland, Winter Park and the OCLS whereas a resident of those cities can go to any OCLS branch and request a "Reciprocal borrower card" which is provided free of charge. The Reciprocal borrower cards is valid for one year and can be used at any OCLS branch with the exception of the Melrose Center at the Orlando Public Library which requires a separate Melrose Center specific card which is issued after the user applies for the card and goes through a mandatory orientation class. Access to the OCLS Internet on library owned PCs requires a Reciprocal borrower to pay small session access fee. The OCLS Wi-Fi network which is available at all branches remains free of charge to all users including Reciprocal borrowers and visitors who use their own iPad, Mac, PC, Smartphone or tablet devices. Maitland and Winter Park Library do not provide reciprocal privileges to OCLS patrons and charge non-residents a yearly user fee.

Orange County is located along the pivotal Interstate 4 corridor, the swing part of the state. Many close elections are won or lost depending on the voting outcome along the corridor. Voters are considered independent, traditionally splitting their votes, electing Democrats and Republicans on the same ballot. As a result of such independence, voters are inundated with non-stop television and radio ads months preceding a general election.

Orange County was one of the first areas of Florida to turn Republican. It swung from a 15-point victory for Franklin D. Roosevelt in 1944 to a seven-point victory for Thomas E. Dewey in 1948. It eventually became one of the stronger Republican bastions in Florida, as evidenced when it gave Barry Goldwater 56 percent of its vote in 1964. For most of the second half of the 20th century, it was one of the more conservative urban counties in Florida and the nation. From 1948 to 1988, Democrats only cracked the 40 percent barrier twice, in 1964 and 1976. However, the Republican edge narrowed considerably in the 1990s. George H. W. Bush fell from 67 percent of the vote in 1988 to only 45.9 percent in 1992. In 1996, Bob Dole only won the county by 520 votes.

In September 2000,[35] Democrats overtook Republicans in voter registration. This was a factor in Al Gore becoming the first Democratic presidential candidate to carry the county since 1948. John Kerry narrowly carried the county in 2004. In 2008, however, Orange County swung hard to Barack Obama, who won it by the largest margin for a Democrat since Roosevelt. In the years since, it has become one of the strongest Democratic bastions in Florida.

Since 2000, Republicans have yet to retake the advantage they once enjoyed. In the twelve years that followed, Democrats experienced a modest increase in their voter registration percentage from 41.40% to 42.73% of the electorate. Minor party voters also had modest growth, increasing from 2.17% to 2.37%. In contrast, Republicans experienced a sharp decrease in registered voters, sliding from 40.95% in 2000 down to 29.85% in 2012. The beneficiary of the Republican losses have been unaffiliated voters. The percentage of the electorate identifying as an unaffiliated voter increased from 15.47% to 25.06% during this same period. Orange County is only one of two different counties in the entire nation to have voted for Al Gore in 2000 after voting for Dole in 1996, a distinction it shares with Charles County, Maryland.[36]

Retrieved from "http://en.turkcewiki.org/w/index.php?title=Orange_County,_Florida&oldid=958506548"
This website is a mirror of Wikipedia, and is not affiliated with the Wikimedia Foundation.
Categories:
Hidden categories: