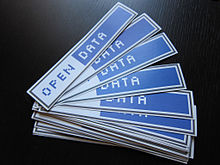 Clear labeling of the licensing terms is a key component of open data, and icons like the one pictured here are being used for that purpose.

Open data is the idea that some data should be freely available to everyone to use and republish as they wish, without restrictions from copyright, patents or other mechanisms of control.[1] The goals of the open-source data movement are similar to those of other "open(-source)" movements such as open-source software, hardware, open content, open education, open educational resources, open government, open knowledge, open access, open science, and the open web. Paradoxically, the growth of the open data movement is paralleled by a rise in intellectual property rights.[2] The philosophy behind open data has been long established (for example in the Mertonian tradition of science), but the term "open data" itself is recent, gaining popularity with the rise of the Internet and World Wide Web and, especially, with the launch of open-data government initiatives such as Data.gov, Data.gov.uk and Data.gov.in.

The concept of open data is not new, but a formalized definition is relatively new. Conceptually, open data as a phenomenon denotes that governmental data should be available to anyone with a possibility of redistribution in any form without any copyright restriction.[3] One more definition is the Open Definition which can be summarized in the statement that "A piece of data is open if anyone is free to use, reuse, and redistribute it – subject only, at most, to the requirement to attribute and/or share-alike."[4] Other definitions, including the Open Data Institute's "Open data is data that anyone can access, use or share", have an accessible short version of the definition but refer to the formal definition.

Open data may include non-textual material such as maps, genomes, connectomes, chemical compounds, mathematical and scientific formulae, medical data, and practice, bioscience and biodiversity. Problems often arise because these are commercially valuable or can be aggregated into works of value. Access to, or re-use of, the data is controlled by organisations, both public and private. Control may be through access restrictions, licenses, copyright, patents and charges for access or re-use. Advocates of open data argue that these restrictions are against the common good and that these data should be made available without restriction or fee. In addition, it is important that the data are re-usable without requiring further permission, though the types of re-use (such as the creation of derivative works) may be controlled by a license.

A typical depiction of the need for open data:

Numerous scientists have pointed out the irony that right at the historical moment when we have the technologies to permit worldwide availability and distributed process of scientific data, broadening collaboration and accelerating the pace and depth of discovery ... we are busy locking up that data and preventing the use of correspondingly advanced technologies on knowledge.

Creators of data often do not consider the need to state the conditions of ownership, licensing and re-use; instead presuming that not asserting copyright puts the data into the public domain. For example, many scientists do not regard the published data arising from their work to be theirs to control and consider the act of publication in a journal to be an implicit release of data into the commons. However, the lack of a license makes it difficult to determine the status of a data set and may restrict the use of data offered in an "Open" spirit. Because of this uncertainty it is also possible for public or private organizations to aggregate said data, protect it with copyright and then resell it.

The issue of indigenous knowledge (IK) poses a great challenge in terms of capturing, storage and distribution. Many societies in third-world countries lack the technicality processes of managing the IK.

At his presentation at the XML 2005 conference, Connolly[6] displayed these two quotations regarding open data: 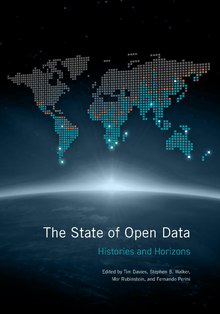 The State of Open Data, a 2019 book from African Minds

Open data can come from any source. This section lists some of the fields that publish (or at least discuss publishing) a large amount of open data.

While the open-science-data movement long predates the Internet, the availability of fast, ubiquitous networking has significantly changed the context of Open science data, since publishing or obtaining data has become much less expensive and time-consuming.[10]

The Human Genome Project was a major initiative that exemplified the power of open data. It was built upon the so-called Bermuda Principles, stipulating that: "All human genomic sequence information ... should be freely available and in the public domain in order to encourage research and development and to maximize its benefit to society'.[11] More recent initiatives such as the Structural Genomics Consortium have illustrated that the open data approach can also be used productively within the context of industrial R&D.[12]

In 2004, the Science Ministers of all nations of the Organisation for Economic Co-operation and Development (OECD), which includes most developed countries of the world, signed a declaration which essentially states that all publicly funded archive data should be made publicly available.[13] Following a request and an intense discussion with data-producing institutions in member states, the OECD published in 2007 the OECD Principles and Guidelines for Access to Research Data from Public Funding as a soft-law recommendation.[14]

Examples of open data in science:

There are a range of different arguments for government open data.[17][18] For example, some advocates contend that making government information available to the public as machine readable open data can facilitate government transparency, accountability and public participation. "Open data can be a powerful force for public accountability—it can make existing information easier to analyze, process, and combine than ever before, allowing a new level of public scrutiny."[19] Governments that enable public viewing of data can help citizens engage within the governmental sectors and "add value to that data."[20]

Some make the case that opening up official information can support technological innovation and economic growth by enabling third parties to develop new kinds of digital applications and services.

Several national governments have created websites to distribute a portion of the data they collect. It is a concept for a collaborative project in the municipal Government to create and organize culture for Open Data or Open government data.

Additionally, other levels of government have established open data websites. There are many government entities pursuing Open Data in Canada. Data.gov lists the sites of a total of 40 US states and 46 US cities and counties with websites to provide open data; e.g. the state of Maryland, the state of California, US[21] and New York City.[22]

At the international level, the United Nations has an open data website that publishes statistical data from member states and UN agencies,[23] and the World Bank published a range of statistical data relating to developing countries.[24] The European Commission has created two portals for the European Union: the EU Open Data Portal which gives access to open data from the EU institutions, agencies and other bodies[25] and the PublicData portal that provides datasets from local, regional and national public bodies across Europe.[26]

In October 2015, the Open Government Partnership launched the International Open Data Charter, a set of principles and best practices for the release of governmental open data formally adopted by seventeen governments of countries, states and cities during the OGP Global Summit in Mexico.[27]

Many non-profit organizations offer more or less open access to their data, as long it does not undermine their users', members' or third party's privacy rights. In comparison to for-profit corporations, they do not seek to monetize their data. OpenNWT launched a website offering open data of elections.[28] CIAT offers open data to anybody, who is willing to conduct big data analytics in order to enhance the benefit of international agricultural research.[29] DBLP, which is owned by a non-profit organization Dagstuhl, offers its database of scientific publications from computer science as open data.[30] Non-profit hospitality exchange services offer trustworthy teams of scientists access to their anonymized data for publication of insights to the benefit of humanity. Before becoming a for-profit corporation in 2011, Couchsurfing offered 4 research teams access to its social networking data.[31][32][33][34] In 2015, non-profit hospitality exchange services Bewelcome and Warm Showers provided their data for public research.[35][36]

The debate on open data is still evolving. The best open government applications seek to empower citizens, to help small businesses, or to create value in some other positive, constructive way. Opening government data is only a way-point on the road to improving education, improving government, and building tools to solve other real world problems. While many arguments have been made categorically[citation needed], the following discussion of arguments for and against open data highlights that these arguments often depend highly on the type of data and its potential uses.

Arguments made on behalf of open data include the following:

It is generally held that factual data cannot be copyrighted.[44] However, publishers frequently add copyright statements (often forbidding re-use) to scientific data accompanying publications. It may be unclear whether the factual data embedded in full text are part of the copyright.

While the human abstraction of facts from paper publications is normally accepted as legal there is often an implied restriction on the machine extraction by robots.

Unlike open access, where groups of publishers have stated their concerns, open data is normally challenged by individual institutions.[citation needed] Their arguments have been discussed less in public discourse and there are fewer quotes to rely on at this time.

Arguments against making all data available as open data include the following:

Relation to other open activities[edit]

The goals of the Open Data movement are similar to those of other "Open" movements.

Several funding bodies which mandate Open Access also mandate Open Data. A good expression of requirements (truncated in places) is given by the Canadian Institutes of Health Research (CIHR):[49]

Other bodies active in promoting the deposition of data as well as full text include the Wellcome Trust. An academic paper published in 2013 advocated that Horizon 2020 (the science funding mechanism of the EU) should mandate that funded projects hand in their databases as "deliverables" at the end of the project, so that they can be checked for third party usability then shared.[50]

Several mechanisms restrict access to or reuse of data (and several reasons for doing this are given above). They include:

Retrieved from "http://en.turkcewiki.org/w/index.php?title=Open_data&oldid=983939801"
This website is a mirror of Wikipedia, and is not affiliated with the Wikimedia Foundation.
Categories:
Hidden categories: