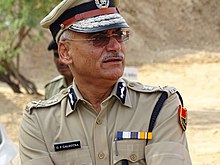 Galhotra is a chartered accountant by education.[6] He holds an M.Phil. degree in National Security and Strategic Studies from University of Madras.[6]

He moved back to Rajasthan in 2004 and worked as Inspector General of Police in Jaipur until 2008 when he started his second stint as Joint Director in the CBI, at Kolkata and Delhi.[1]

Retrieved from "http://en.turkcewiki.org/w/index.php?title=Om_Prakash_Galhotra&oldid=1076692728"
This website is a mirror of Wikipedia, and is not affiliated with the Wikimedia Foundation.
Categories:
Hidden categories: