Jump to navigation Jump to search
Not to be confused with Obelisk, Obelix, or Obolus.
"÷" redirects here. For the album, see ÷ (album).

An obelus (symbol: ÷ or †, plural: obeluses or obeli) is a symbol consisting of a short horizontal line with a dot above and another dot below, and in other uses it is a symbol resembling a small dagger. In mathematics it is mainly used to represent the mathematical operation of division. It is therefore commonly called the division sign. In editing texts an obelus takes the form of a dagger mark (†) and is used as a reference mark, or to indicate that a person is dead, and often used to indicate a footnote.[1][2][3]

The word "obelus" comes from ὀβελός, the Ancient Greek word for a sharpened stick, spit, or pointed pillar. This is the same root as that of the word "obelisk".

Originally this sign (or a plain line) was used in ancient manuscripts to mark passages that were suspected of being corrupted or spurious; the practice of adding such marginal notes became known as obelism. The dagger symbol, also called an obelisk, is derived from the obelus and continues to be used for this purpose. As Streeter (1924) writes:

The obelus, invented by Aristarchus to mark suspected passages in Homer, is frequent in manuscripts of the Gospel to mark just those sections, like the Pericope in John, which modern editors reject. The first corrector of [the Codex Sinaiticus], probably the contemporary διορθωτής, was at pains to enclose in brackets and mark with dots for deletion two famous passages in Luke written by the original scribe which, being absent from B W 579 and the Egyptian versions, we infer were not accepted in the text at that time dominant in Alexandria, viz. the incident of the "Bloody Sweat" in Gethsemane (Lk.xxi.43 f.) and the saying "Father forgive them" (Lk.xi.34).[4] 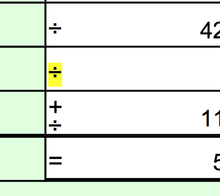 Plus and minuses. The obelus—or division sign—used as a variant of the minus sign in an excerpt from an official Norwegian trading statement form called «Næringsoppgave 1» for the taxation year 2010.

The obelus was first used as a symbol for division in 1659 in the algebra book Teutsche Algebra by Johann Rahn. Some think that John Pell, who edited the book, may have been responsible for this use of the symbol. Other symbols for division include the slash or solidus (/), the colon (:), and the fraction bar (the horizontal bar in a vertical fraction).

Historically, the obelus has also been used to represent subtraction in Northern Europe; such usage continued in some parts of Europe (including Norway and, until fairly recently, Denmark).[5] In Italy and Russia the obelus is sometimes used to denote a range of values, in engineering context.

The ISO 80000-2 standard for mathematical notation recommends only the solidus or fraction bar for division, or the colon for ratios; it says that the obelus "should not be used" for division.[6]

In Microsoft Windows, the obelus is produced with Alt+0247 (or 246 with no zero) on the number pad, or by pressing Alt Gr+⇧ Shift++ when an appropriate keyboard layout is in use. In classic Mac OS and macOS, it is produced with ⌥ Option+/.

On UNIX-based systems using Screen or X with a Compose key enabled, it can be produced by composing : (colon) and - (hyphen/minus). It may also be input by Unicode code-point on GTK-based applications by pressing Control+⇧ Shift+U, followed by the code point in hexadecimal (F7) and terminated by ↵ Enter.

In LaTeX, the obelus is obtained by \div.

The dictionary definition of obelus at Wiktionary

Retrieved from "http://en.turkcewiki.org/w/index.php?title=Obelus&oldid=934334347"
This website is a mirror of Wikipedia, and is not affiliated with the Wikimedia Foundation.
Categories:
Hidden categories: