The Northumbrian dialect refers to any of several English language varieties spoken in the historic English region of Northumbria, which includes most of present-day North East England. This may include such varieties as:

This article focuses only on the final variety, most commonly known in academic literature as Northumbrian English or Northumbrian dialect.

Dialect division in the 19th century[edit]

Alexander John Ellis placed the majority of both Northumberland and Durham within his 'North Northern' dialect group, which he deemed to be a transitional variety between other Northern dialects (those north of the Humber-Lune line) and Scots. Exceptions included a small portion of north Northumberland around the Cheviot hills, which was deemed to be Scots-speaking, as well as upper Weardale, Teesdale, and part of south Durham below the southern boundary of the Durham Coalfield, which were all considered part of the 'West Northern' dialect group, and thus spoke varieties more closely related to Cumbrian and Richmondshire dialects.[5] Like Cumbrian, the dialect of south Durham was subject to greater Norse influence than the rest of Durham and Northumberland. [6] This is evident by the fact that streams in south Durham are typically known as ‘becks’ (from the Old Norse ‘bekkr’), while the rest of Durham and the entirety of Northumberland use the term ‘burn’ (from the Old English ‘burna’). 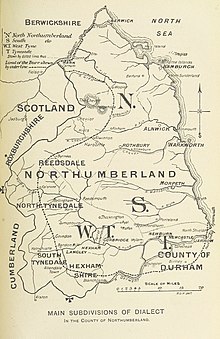 A 19th century dialect map indicating the range of the Northumbrian burr within Northumberland and Durham. The limit of the burr is shown by the outline.

This Dialect has several distinguishing features from the Geordie dialect and features of this dialect include the "Northumbrian burr", a distinct pronunciation of the letter R and elongation of vowels although this feature is not just specific to Berwick-upon-Tweed.

A sociological study of the Anglo-Scottish border region conducted in the year 2000 found that locals of Alnwick, 30 miles (48 km) south of Berwick, associated the Berwick accent with Scottish influence. Conversely, those from Eyemouth, Scotland, 9 miles (14 km) north of Berwick, firmly classed Berwick speech as English, identifying it as Northumbrian.

Classification in relation to English and Scots[edit]

The Northumbrian Language Society, founded in 1983 to research, preserve and promote the Northumbrian language variety, considers it as divergent enough to be not a dialect of Modern Standard English but, rather, a separate English (Anglic) language of its own, since it is largely not comprehensible by standard English speakers.[2] Northumbrian has perhaps an even closer relationship with Modern Scots,[13] and both are sometimes considered as distinct languages derived from Old English but close relatives,[2] or as essentially the same language, albeit with minor differences. The similarities are not commonly or formally recognised due to sensitivities on both sides of the border.[14] The status of Scots and Northumbrian as either languages or dialects therefore remains open to debate.[15]

Some Northumbrian words include:[20][21]

Retrieved from "http://en.turkcewiki.org/w/index.php?title=Northumbrian_dialect&oldid=1036080933"
This website is a mirror of Wikipedia, and is not affiliated with the Wikimedia Foundation.
Categories:
Hidden categories: