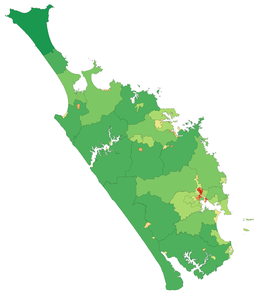 The Northland Region[1] (Māori: Te Tai Tokerau) is the northernmost of New Zealand's 16 local government regions. New Zealanders sometimes refer to it as the Winterless North because of its mild climate. The main population centre is the city of Whangārei, and the largest town is Kerikeri. At the 2018 New Zealand census Northland recorded a surprising population growth spurt of 18.1% since the previous 2013 census, placing it as the fastest growing region of New Zealand, ahead of other strong growth regions such as the Bay of Plenty (2nd with 15%) and Waikato (3rd with 13.5%).

The Northland Region occupies the northern 80% (265 km) of the 330 km Northland Peninsula, the southernmost part of which is in the Auckland Region.[2] Stretching from a line at which the peninsula narrows to a width of just 15 km a little north of the town of Wellsford, Northland Region extends north to the tip of the Northland Peninsula, covering an area of 13,940 km2, a little over five per cent of the country's total area. It is bounded to the west by the Tasman Sea, and to the east by the Pacific Ocean. The land is predominantly rolling hill country. Farming and forestry occupy over half of the land and are two of the region's main industries.[2]

Although many of the region's kauri forests were felled during the 19th century, some areas still exist where this rare giant grows tall. New Zealand's largest tree, Tāne Mahuta, stands in the Waipoua Forest south of the Hokianga Harbour. These kauri forests are also home to Te Raupua (781 m), the highest point in the region. Northland has many endemic plant and invertebrate species[3] such as the endangered snail pūpū harakeke (Placostylus ambagiosus), stick insects and the Northland green tree gecko (Naultinus grayii).[4]

The western coast is dominated by several long straight beaches, the most famous of which is the inaccurately-named 88 km stretch of Ninety Mile Beach in the region's far north. The slightly longer Ripiro Beach lies further south. Two large inlets are also located on this coast, the massive Kaipara Harbour in the south, which Northland shares with the Auckland Region, and the convoluted inlets of the Hokianga Harbour.

The east coast is more rugged, and is dotted with bays and peninsulas. Several large natural harbours are found on this coast, from Parengarenga close to the region's northern tip, then Whangaroa Harbour, and past the famous Bay of Islands down to Whangārei Harbour, on the shores of which is situated the largest population centre. Numerous islands dot this coast, notably the Cavalli Islands, the Hen and Chicken Islands, Aorangaia Island and the Poor Knights Islands.

The region of Northland has an oceanic climate (Cfb in the Köppen climate classification), but a subtropical climate in the Trewartha climate classification with warm humid summers and mild wet winters. Due to its latitude and low elevation, Northland has the country's highest average annual temperature.[5] However, as with other parts of New Zealand, climate conditions are variable. In summer, temperatures range from 22 °C to 26 °C, occasionally rising above 30 °C. In winter, maximum temperatures vary between 13 °C and 19 °C, while minima vary between 6 °C and 11 °C.[6]

Ground frosts are rare due to the region being encircled by the moderating Pacific and Tasman waters; however, light frosts do occur infrequently around Dargaville in the lowlands.[5] The hottest months are January and February. In January 2009, excessive sunlight hours and below-average rainfall resulted in the region being declared a drought zone.[7]

Typical annual rainfall for the region is 1500–2000 mm but varies at different altitudes. Northland has an average of 2000 sunshine hours annually.[8] Winds are predominantly from the southwest. Occasionally in summer, the region experiences stormy conditions from former cyclones which generally become much weaker once they leave tropical latitudes.[6]

There are three territorial authorities in the region:

Until 1989 Northland was governed by several councils and an earlier Northland Regional Council known as the Northland United Council.[1] (It had been part of Auckland Province from 1853 until government was centralised in 1876. Long after Auckland Province ceased, the region continued to be known as North Auckland.)[9] In 1989, Kaitaia Borough, Mangonui County, Whangaroa County, Bay of Islands County, Hokianga County, and Kaikohe Borough were amalgamated to become the Far North District. Whangarei City, Whangarei County, and Hikurangi Town Councils became the Whangarei District, with Dargaville Borough and Otamatea County becoming the Kaipara District. The Northland Regional Council became a tier of local government above these territorial authorities.

A proposal to merge the three district councils and the regional council into a unitary authority to be known as the Northland Council was rejected by the Local Government Commission in June 2015.[10]

The percentage of people born overseas was 15.8, compared with 27.1% nationally.

Although some people objected to giving their religion, 49.7% had no religion, 35.6% were Christian, and 7.0% had other religions.

Māori refer to Northland – and by extension its Māori people – as Te Taitokerau (the northern tide) and Māori language and traditions are strong there.[14] Major tribal groups include Ngāpuhi, Te Aupōuri, Te Rarawa, Ngāti Kahu, Ngāti Kurī and Ngāti Whātua.[15] Several of these tribes form a loose association known as the Muriwhenua.[16]

Approximately one third of the region's population are Māori; the majority of the remainder is of European lineage. Compared to the rest of the country, Pacific Islanders are under-represented in Northland.[citation needed] Although most of the region's European population are British (as is true with the rest of the country), certain other ethnicities are represented as well. These include a sizeable Croatian community from the Dargaville area north, particularly around Kaitaia.[citation needed]

Northland is New Zealand's least urbanised region, with 50% of the population of 194,600 living in urban areas. Whangārei is the largest urban area, with a population of 54,400 (June 2020).[17] The region's population is largely concentrated along the east coast. Northland includes one of the fastest growing towns in New Zealand, Mangawhai, which is expanding rapidly because of residential and subsequent commercial development. 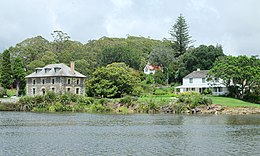 According to Māori legend, the North Island of New Zealand was an enormous fish, caught by the demigod Māui. For this reason, Northland is sometimes referred to as "The tail of the fish", Te Hiku o Te Ika.

Northland iwi claim that Kupe made landfall at the Hokianga (although others claim this was at Taipa) in the northwest of Northland, and thus the region claims that it was the birthplace of New Zealand. Some of the oldest traces of Māori kāinga (fishing villages) can be found here.

If the Māori regard the region as the legendary birthplace of the country, there can be no doubt that it was the European starting-point for the modern nation of New Zealand. Traders, whalers and sealers were among the first arrivals, and the gum and timber of the mighty kauri trees brought more colonisers.

In the Bay of Islands, Russell, formerly known as Kororareka, was the first permanent European settlement and Kerikeri contains many historic buildings, including the Stone Store, New Zealand's oldest extant building. The nearby settlement of Waitangi was of even more significance, as the signing place of New Zealand's founding document, the Treaty of Waitangi between the Māori tribes and the British Crown, on 6 February 1840.

Fence on a sheep farm

The region's economy is based on agriculture (notably beef cattle and sheep), fishing, forestry, and horticulture. Northland has 4,423 hectares (10,930 acres) of horticultural land as of 2017. Significant crops include avocadoes, kumara, kiwifruit, citrus fruit and olives.[19][20]

Extensive forests are a feature of the Northland landscape. For this reason wood and paper manufacturing industries also make a large contribution to the region's economy.[19] The railway system, which once ran as far north as Donnellys Crossing, has been historically important for the transport of timber via Dargaville to Auckland.

Northland is home to New Zealand's only oil refinery, at Marsden Point, close to Whangārei. New Zealand's natural fuel resources in Taranaki account for a little under half of the refinery's intake, with the rest coming predominantly from the Middle East. The nearby Marsden A thermal power station originally utilised heavy oil from the refinery for electricity production, but no longer does so.

Main article: List of people from the Northland region

Retrieved from "http://en.turkcewiki.org/w/index.php?title=Northland_Region&oldid=1019016947"
This website is a mirror of Wikipedia, and is not affiliated with the Wikimedia Foundation.
Categories:
Hidden categories: