North-Central American English (also known as the Upper Midwestern or North Central dialect in the United States) is an American English dialect native to the Upper Midwestern United States, an area that somewhat overlaps with speakers of the separate Inland North dialect, centered more around the eastern Great Lakes region.[1] The North Central dialect, often popularly though stereotypically recognized as a Minnesota accent, most strongly stretches from the Upper Peninsula of Michigan to eastern Montana, including most of Wisconsin, the northern half of Minnesota, some of northern South Dakota, and most of North Dakota;[2] however, many speakers of the dialect are also found scattered throughout Minnesota, the Dakotas, and Wisconsin (except for metropolitan Milwaukee), as well as in the northern half of Iowa.[3]

The North Central dialect is considered to have developed in a residual dialect region from the neighboring distinct dialect regions of the American West, North, and Canada.[4] A North Central "dialect island" exists in southcentral Alaska's Matanuska-Susitna Valley, since, in the 1930s, it absorbed large numbers of settlers from Michigan, Minnesota, and Wisconsin.[5] "Yooper" English spoken in the Upper Peninsula of Michigan and Iron Range English spoken in Minnesota's Mesabi Iron Range are sub-varieties of the North Central dialect, largely influenced by Fenno-Scandinavian immigration to that area around the beginning of the twentieth century.

Not all of these characteristics are unique to the North Central region.

North Central speech is rhotic. Th-stopping is possible among speakers of lower-class backgrounds. In addition, traces of a pitch accent as in Swedish and Norwegian can persist in some areas of heavy Norwegian or Swedish settlement, and among people who grew up in those areas (some of whom are not of Scandinavian descent). Also, sometimes the comparative form of adjectives are used in place of the root form of the adjective (e.g., saying "the sky is bluer" when the person means "the sky is blue" is common in Minnesota).[citation needed]

The appearance of monophthongs in this region is sometimes explained because of the high degree of Scandinavian and German immigration to these northern states in the late 1800s. Linguist Erik R. Thomas argues that these monophthongs are the product of language contact and notes that other areas where they occur are places where speakers of other languages have had an influence such as the Pennsylvania "Dutch" region.[10] An alternative account posits that these monophthongal variants represent historical retentions, since diphthongization of the mid vowels seems to have been a relatively recent phenomenon in the history of the English language, appearing within the last few centuries, and did not affect all dialects in the U.K. The monophthongs heard in this region may stem from the influence of Scots-Irish or other British dialects that maintain such forms. The fact that the monophthongs also appear in Canadian English may lend support to this account since Scots-Irish speech is known as an important influence in Canada. 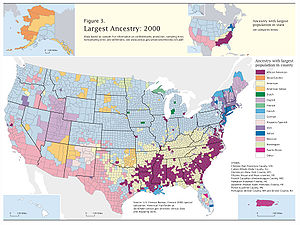 People living in the Upper Peninsula of Michigan (whose demonym, and sometimes sub-dialect, is known as "Yooper," deriving from the acronym "U.P." for "Upper Peninsula"), many northern areas of the Lower Peninsula of Michigan, and in Northern Wisconsin are largely of Finnish, French Canadian, Cornish, Scandinavian, German, and/or Native American descent. The North Central dialect is so strongly influenced by these areas' languages and Canada that speakers from other areas may have difficulty understanding it. Almost half the Finnish immigrants to the U.S. settled in the Upper Peninsula, some joining Scandinavians who moved on to Minnesota. Another sub-dialect is spoken in Southcentral Alaska's Matanuska-Susitna Valley, because it was settled in the 1930s (during the Great Depression) by immigrants from the North Central dialect region.[5][11]

In this dialect, the preposition with is used without an object as an adverb in phrases like come with, as in Do you want to come with? for standard Do you want to come with me? or with us?. In standard English, other prepositions can be used as adverbs, like go down (down as adverb) for go down the stairs (down as preposition). With is not typically used in this way in standard English (particularly in British and Irish English), and this feature likely came from languages spoken by some immigrants, such as Scandinavian (Danish, Swedish, Norwegian), German (includes Austrian), or Dutch (includes Flemish) and Luxembourgish, all of which have this construction, like Swedish kom med.[12][13]

The Upper Midwestern accent is made conspicuous, often to the point of parody or near-parody, in the film Fargo (especially as displayed by Frances McDormand's character Marge Gunderson) and the radio program A Prairie Home Companion (as displayed by many minor characters, especially those voiced by Sue Scott, with whom lead characters, most frequently male roles voiced by Garrison Keillor). It is also evident in the film New in Town.

Retrieved from "http://en.turkcewiki.org/w/index.php?title=North-Central_American_English&oldid=966155419"
This website is a mirror of Wikipedia, and is not affiliated with the Wikimedia Foundation.
Categories:
Hidden categories: