Jump to navigation Jump to search
For other uses, see North (disambiguation). 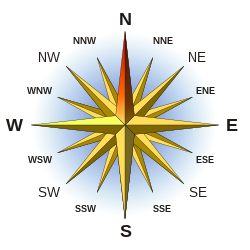 North is one of the four compass points or cardinal directions. It is the opposite of south and is perpendicular to east and west. North is a noun, adjective, or adverb indicating direction or geography.

The word north is related to the Old High German nord,[1] both descending from the Proto-Indo-European unit *ner-, meaning "left; below" as north is to left when facing the rising sun.[2] Similarly, the other cardinal directions are also related to the sun's position.[3][4][5]

The Latin word borealis comes from the Greek boreas "north wind, north", which, according to Ovid, was personified as the son of the river-god Strymon, the father of Calais and Zetes. Septentrionalis is from septentriones, "the seven plow oxen", a name of Ursa Maior. The Greek ἀρκτικός (arktikós) is named for the same constellation, and is the source of the English word Arctic.

Other languages have other derivations. For example, in Lezgian, kefer can mean both "disbelief" and "north", since to the north of the Muslim Lezgian homeland there are areas formerly inhabited by non-Muslim Caucasian and Turkic peoples. In many languages of Mesoamerica, north also means "up". In Hungarian, the word for north is észak, which is derived from éjszaka ("night"), since above the Tropic of Cancer, the Sun never shines from the north, except inside the Arctic Circle during the summer midnight sun.

The direction north is often associated with colder climates because most of the world's land at high latitudes is located in the Northern Hemisphere. The Arctic Circle passes through the Arctic Ocean, Norway, Sweden, Finland, Russia, the United States (Alaska), Canada (Yukon, Northwest Territories and Nunavut), Denmark (Greenland) and Iceland (where it passes through the small offshore island of Grímsey).

By convention, the top side of a map is often north.

To go north using a compass for navigation, set a bearing or azimuth of 0° or 360°.

North is specifically the direction that, in Western culture, is treated as the fundamental direction:

Magnetic north is of interest because it is the direction indicated as north on a properly functioning (but uncorrected) magnetic compass. The difference between it and true north is called the magnetic declination (or simply the declination where the context is clear). For many purposes and physical circumstances, the error in direction that results from ignoring the distinction is tolerable; in others a mental or instrument compensation, based on assumed knowledge of the applicable declination, can solve all the problems. But simple generalizations on the subject should be treated as unsound, and as likely to reflect popular misconceptions about terrestrial magnetism.

Maps intended for usage in orienteering by compass will clearly indicate the local declination for easy correction to true north. Maps may also indicate grid north, which is a navigational term referring to the direction northwards along the grid lines of a map projection.

Roles of north as prime direction[edit]

The visible rotation of the night sky around the visible celestial pole provides a vivid metaphor of that direction corresponding to "up". Thus the choice of the north as corresponding to "up" in the northern hemisphere, or of south in that role in the southern, is, prior to worldwide communication, anything but an arbitrary one - at least for night-time astronomers.[7] (Note: the southern hemisphere lacks a prominent visible analog to the northern Pole Star.) On the contrary, Chinese and Islamic cultures considered south as the proper "top" end for maps.[8] In the cultures of Polynesia, where navigation played an important role, winds - prevailing local or ancestral - can define cardinal points.[9]

Roles of east and west as inherently subsidiary directions[edit]

While the choice of north over south as prime direction reflects quite arbitrary historical factors,[which?] east and west are not nearly as natural alternatives as first glance might suggest. Their folk definitions are, respectively, "where the sun rises" and "where it sets". Except on the Equator, however, these definitions, taken together, would imply that

Reasonably accurate folk astronomy, such as is usually attributed to Stone Age peoples or later Celts, would arrive at east and west by noting the directions of rising and setting (preferably more than once each) and choosing as prime direction one of the two mutually opposite directions that lie halfway between those two. The true folk-astronomical definitions of east and west are "the directions, a right angle from the prime direction, that are closest to the rising and setting, respectively, of the sun (or moon).

Being the "default" direction on the compass, north is referred to frequently in Western popular culture. Some examples include:

Retrieved from "http://en.turkcewiki.org/w/index.php?title=North&oldid=929344382"
This website is a mirror of Wikipedia, and is not affiliated with the Wikimedia Foundation.
Categories:
Hidden categories: