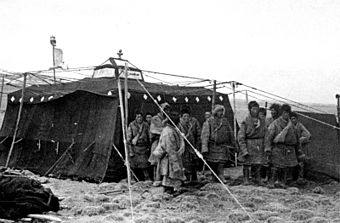 Nomadic tents are a vital source of housing for nomads living in mountainous regions of Central Asia. They are usually made from yak wool that has been hand spun into yarn and takes about a year to make a mid-sized tent.

Tibetan tents on the contrary are very thin in comparison where the sky can be seen through the hand spun yarn inside the tent. Nomad tents are held up using hand spun yak wool rope and 8 to 12 wooden poles. The top of the tent has a large opening that is used to let smoke out and to let the warm sunshine in. Prayer flags are in abundance and can be found flying from the tent roofs.

The insides of nomad tents are very basic as the nomads, often very poor, own few belongings. Inside there will be some sleeping mats and blankets, a stove, a table or two, a few extra clothes and a little food. Nearly all tents will have a picture of a local lama and often will have a picture of the 14th Dalai Lama. A thangka painting will also be found hanging inside. 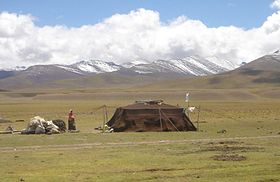 Traditionally yaks are kept tied up outside of the tent using lines of rope with have 8 to 10 small loops around one of the yaks feet at night (or tied through the yak's nose) that are made secure by two wooden stakes driven into the ground. A few dogs will also be kept tied up outside the tent. Large piles of dried yak dung are stored close to the tent as an important source of fuel. It is even common to see Tibetan buddhist sculptures made in the yak dung. 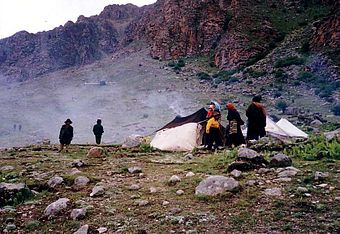 Hand woven yak wool tents are declining rapidly. Many nomads now only live in these tents in the summer months. They increasingly live in mudbrick homes the rest of the year. Others are now moving into towns to live in traditional style Tibetan homes or are being relocated into cities (such as Xining) where the government provides them with a modern style apartment.

Although there the number of yak wool tents each year in Tibet and Inner China reduces every year, there are still several areas that have them in abundance. The northern regions of the Nagchu and Ngari prefectures in the Tibet Autonomous Region, Yushu prefecture in southern Qinghai and northern Ganzi prefecture in Sichuan province all have nomads still living in yak wool tents to this day.

Retrieved from "http://en.turkcewiki.org/w/index.php?title=Nomadic_tents&oldid=905417844"
This website is a mirror of Wikipedia, and is not affiliated with the Wikimedia Foundation.
Categories:
Hidden categories: