Jump to navigation Jump to search
Variety of American English 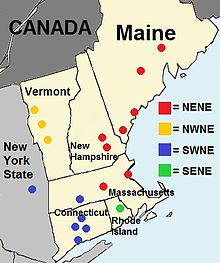 New England English is not a single American dialect, but a collective term for a number of dialects and varieties that are close geographic neighbors within New England, but which differ on a spectrum that broadly divides New England English into a unique north versus south (specifically, a northern merger of the LOT and THOUGHT vowels, versus a southern merger of the LOT and PALM vowels), as well as a unique east versus west (specifically, an eastern pronunciation of the "r" sound only before vowels, versus a western pronunciation of all "r" sounds). Regarding the former feature, all of northern New England (most famously including Boston, but going as far southeast as Cape Cod and as far north as central Maine) historically merges the open and open-mid back rounded vowels (so that, for instance, pond and pawned are pronounced the same, which is commonly called the cot–caught merger), while southern coastal New England (including Rhode Island) historically maintains a noticeable distinction between these two vowels. Regarding the second feature, all of eastern New England is historically non-rhotic (famously pronouncing "car" like "kah"), while all of western New England is historically rhotic (or "r-ful"). Therefore, four combinations of these two features are possible, and coincidentally all four exist among New England English speakers, largely correlated with the exact geographic quadrant in New England in which a speaker was raised.

All the local dialects of New England are also known for commonly pronouncing the unstressed sequences /tɪŋ/ and /tən/ (for example, found in "sitting" /ˈsɪtɪŋ/ or "Britain" /ˈbrɪtən/) as [ʔn̩] (

New England pronunciation of "mountain"). This form of t-glottalization (especially the /tən/ form) is found commonly in other parts of the country as well, like in the word "Britain" (sometimes represented along the lines of Brih'in).

The extent that speakers raise the tongue in the English "short a" vowel varies widely in New England; however, across the board, New England speakers demonstrate a definite "nasal" short-a system, in which the vowel is always raised the absolute strongest whenever occurring before the nasal consonants /m/ and /n/[11] (so that, pan, for example, nearly approaches the sound of the word paean). In all of New England except Rhode Island and southern Connecticut, the short a may also be noticeably raised in many other environments.[12]

The following terms originate from and are used commonly and nearly exclusively throughout New England:

As in the rest of the Northeast, sneakers is the primary term for athletic shoes, and common typically before adjectives or adverbs, wicked is used as an intensifier word (predominant in Northern and Eastern New England English, from Boston).[18] Many Boston-originating local terms have dispersed throughout Eastern New England and, prominently, all the rest of Massachusetts.

listen). The phrase Park the car in Harvard Yard—dialectally transcribed [pʰak ðə ˈkʰaɹ‿ɪn ˈhavəd ˈjad]—is commonly used as a shibboleth, or speech indicator, for the non-rhotic Eastern New England dialect running from Boston north to Maine, and as far west as Worcester, which contrasts with the generally rhotic dialects elsewhere in North America.[19] In all of Eastern New England, except Rhode Island, words like caught and cot are pronounced identically (both are often rounded, thus:

[kʰɒt]), because those two vowel sounds have fully merged.[20] A phenomenon called Canadian raising occurs throughout Eastern New England, causing writer to have a different stressed vowel sound than rider, and for the verb house to have a different vowel sound than the noun house. /aʊ/ and /u/ have relatively back starting positions. The horse–hoarse distinction is still present to some extent in some areas, as well as the Mary–marry–merry distinction in many speakers.[citation needed]

Retrieved from "http://en.turkcewiki.org/w/index.php?title=New_England_English&oldid=965012570"
This website is a mirror of Wikipedia, and is not affiliated with the Wikimedia Foundation.
Categories:
Hidden categories: